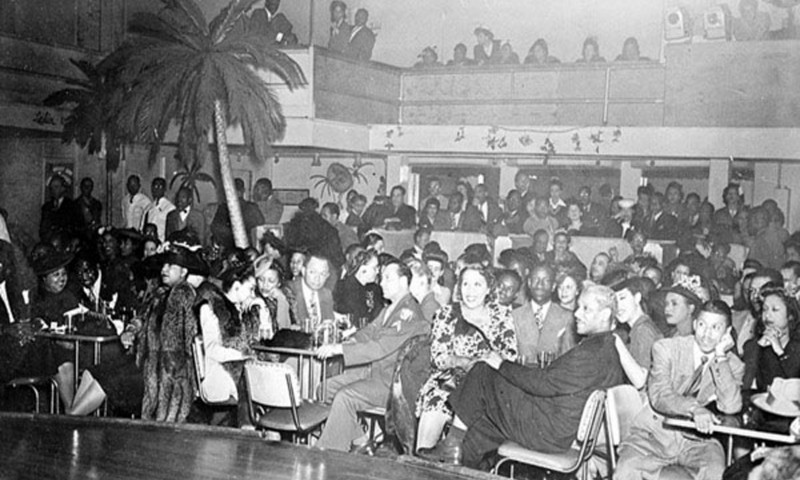 By KARL ACKERMANN
January 6, 2018
Sign in to view read count
Beyond the Hubs

While New Orleans, Chicago, Kansas City and New York City were the incubators of modern jazz, they were by no means the only locations with an appetite for live music. Jazz artists whose point of origin could not sustain multiple venues ventured to locations near and far to practice their trade. In some cases a jazz scene grew up around the migration of musicians, though not always for the long term. Through the first two parts of this series it was evident that there were common denominators that applied to most of the original jazz clubs in the major cities: prohibition and race. The nationwide ban on the manufacture and consumption of alcoholic beverages began in January 1920 and ended in December 1933. It is not a coincidence that many jazz clubs in Chicago, New York and Kansas City were fronts for selling alcohol. The speakeasies, run by various organized crime families, took advantage of the popularity of Jazz Age music and presented that form of entertainment, often as the most thinly veiled approximation of legitimacy. It was a fundamentally unstable platform for promoting jazz and for longevity of clubs. Racial issues were a built-in detriment to permanency as well. Black performers, typically working at the pleasure of white audiences, were the rule rather than the exception. Tensions rose across the range of socio-economic issues from the beginning of the Jazz Age through the 1970s as segregated jazz venues represented a microcosm of the larger social issues. In at least two cases, jazz scenes came to be completely obliterated by their own backstories. Corruption in Kansas City and racial unrest in Philadelphia and Los Angeles destroyed thriving jazz markets—markets that never returned to their previous status.

Kansas City's distinction as a jazz hub in the 1920s and 1930s was aided by simple geography. Traveling musicians from Oklahoma City, Tulsa, Dallas, San Antonio, Omaha and Wichita, saw Kansas City as a stop-over that provided opportunities to play and recruit from a growing talent pool. In contrast to the city's nearest source of talent—New Orleans—the Kansas City style of jazz was a bigger, more complex sound with roots in both rustic regional blues, and the related boogie-woogie form, as well as orchestrated ragtime. Much of this musical development was influenced by those outsiders who lent their own take on the music.

The infamous Kansas City mayor and political boss Tom Pendergast established a dogmatic climate that allowed jazz to grow during Prohibition. For more than a decade beginning in 1925 and ending with his arrest for tax fraud in 1938, Pendergast exercised a sprawling control of the city and allowed vice to run rampant. The speakeasies and cabarets where Kansas City jazz developed, were the domain of mobsters and corrupt politicians, just as they often were in Chicago and New York.

More than one-hundred nightclubs and dozens of dance halls existed in 1930s Kansas City. The historic jazz district at 18th and Vine was densely populated with theatres whose programs revolved around jazz. The Gem, Panama, Lincoln and Boone were originally ragtime venues that evolved with new musical developments. Prior to joining the Benny Moten Band, Count Basie played organ at the Eblon Theater and the Lincoln Theater hosted Saturday shows with live broadcasts. The "Vine Street Varieties," as they were called, featured local talent such as Herman Walder, Joe Turner, Pete Johnson and Julia Lee. The Subway Club, El Capitan Club, and the Sunset Club, were among the popular smaller venues of the time.

Not surprisingly, the consequence of Pendergast's downfall was a political reformation that took much of the local jazz scene as collateral damage by the early 1940s. Urban renewal began by plowing under a nineteen block area in the historic district, driving nearby businesses into bankruptcy and leading to years of infrastructure and economic corrosion throughout the district. Though Charlie Parker had left Kansas City for New York by the late 1930s, future stars were still drawn to the city by the halo effect that he had left behind. Sonny Stitt, Dexter Gordon and Miles Davis all made a point of staying and playing in Kansas City when a tour would take them that way.

Advocates for the 18th & Vine Jazz District have seen a slow but well-intentioned revival of the area. The Mutual Musicians' Foundation Building is a historic site that serves the dual purposes of a museum and a performance space. The Blue Room Jazz Club—named after its 1930s predecessor—similarly combines historical artifacts with mostly local jazz performers but also features regular jam sessions and big band shows. Green Lady Lounge self-identifies as the "Venue for Authentic Kansas City Jazz" and the club takes that vision seriously. The focus on the Kansas City tradition is seen in velvet red walls ornamented with vintage oil paintings and 1950s style hanging lamps. The tradition is heard in local talent who play on the main floor stage and in a lower level room, reminiscent of the speakeasies that made the town famous.

In his book A Prayer for the City (Vintage Books/Random House, 1997), Buzz Bissinger reminds readers that Philadelphia, Pennsylvania is a "city of firsts" amid the metropolitan centers of the U.S. Among those firsts are a hospital, theater, daily newspaper, black newspaper, public school, public bank, magazine, and the first U.S. manufactured piano. Philadelphia was also the first city to produce a substantial home-grown and city-nurtured crop of jazz musicians, many of whom would play a significant role in shaping the future of music. Reminiscent of the stars on Hollywood Boulevard, Philadelphia's Walk of Fame, on Broad Street, features well over one-hundred brass sidewalk plaques that commemorate the city's jazz legends.

In and around the era of the jazz age, Philadelphia produced Benny Golson, Jimmy Bond, and Walter Dickerson, among others. Later arrivals included McCoy Tyner, Bobby Durham, Marilyn Crispell, Marc Copland, Joe Chambers, Uri Caine, Kurt Rosenwinkel, Charles Fambrough, Stanley Clarke and Melody Gardot. Apropos of the "City of Brotherly Love," jazz siblings sprang from the Philadelphia streets. An affinity for Charlie Parker, earned Jimmy Heath the nickname "Little Bird" and in the mid to late 1940s, his band—which included John Coltrane—was a mainstay on the Philadelphia jazz scene. Heath and his brother, the drummer Albert "Tootie" Heath were natives of the city and shuttled between local venues and New York. Bassist Percy Heath spent his childhood in Philadelphia, later recording more than three-dozen albums with the Modern Jazz Quartet. Brother Albert "Tootie" Heath, was part of that group and the three brothers worked and recorded as the Heath Brothers from the 1970s into the 1990s. Not the only Philadelphia brothers in jazz, the city gave us Kenny Barron and tenor saxophonist Bill Barron as well as Michael Brecker and Randy Brecker.

As was the case in New Orleans, Chicago and New York, the early venues for jazz were dancehalls and theaters. In Philadelphia, the Academy of Music opened in 1857 as an opera house, hosting Maria Callas, Enrico Caruso, Gustav Mahler, as well as Rachmaninoff, Stravinsky, and Tchaikovsky. But the South Broad Street academy also welcomed many of the great names in jazz such as Duke Ellington, Charlie Parker, Dizzy Gillespie and Coltrane, who called the city home from 1952 until 1958, and then on-and-off until his death in 1967. The Earle Theatre opened in 1924 at 11th and Market Streets. Its enormous stage and a seating capacity of more than twenty-five hundred made the opulent theater a draw for the top names in Big Band music. Benny Goodman, Tommy Dorsey, Glen Miller and Ellington played the Earle, often premiering upcoming or recent recordings. The proliferation of television negatively impacted live shows and led to the closing and demolition of the Earle in 1953.

Billy Krechmer (read his story), a South Jersey reed player with a penchant for Dixieland jazz, opened a modest space called The Jam Session on Ranstead Street in 1938. His business partner, saxophonist Nat Segall, sold out to Krechmer within a year and opened the Downbeat Club which was not related to New York's club of the same name. The Downbeat was—by all accounts—a successful club drawing recognized artists such as Dizzy Gillespie. But Segall was subjected to frequent raids by the Philadelphia police on the grounds of serving alcohol to minors. The local press strongly speculated that the rationale for the raids was actually the police department's disdain for Segall's permitting integrated audiences. Overwhelmed by the barrage of manufactured infractions, Segall closed the Downbeat in 1948. Krechmer, meanwhile, had renamed The Jam Session as Billy Krechmer's Music Room and he enjoyed a very long run, closing in 1966.

Two Broad Street intersections, South and Lombard Streets—were the locations of Pep's Musical Bar and the Showboat respectively. The Showboat was housed in what was once the Douglas Hotel, the location now marked with a plaque designating it as the one time residence of Billie Holiday. Gillespie, Miles Davis, Coltrane, Art Blakey, Cannonball Adderley, Philly Joe Jones, Thelonius Monk and other notable names played the venue that was later renamed as the Bijou Café, with a more cross-genre calendar. Pep's Musical Bar had hosted Nina Simone, Yusef Lateef (who recorded a live album at the club), Nat "King" Cole, Count Basie, Ellington, Lester Young, Billie Holiday and Monk. At 15th Street and Ridge Avenue The Blue Note featured the Ray Bryant Trio as their house band with occasional appearances from Lester Young, Gillespie, Charlie Parker and Davis, whose quintet with Coltrane, Red Garland, Paul Chambers and Philly Joe Jones appeared at the club in 1956. Watts' Zanzibar (a precursor of the Zanzibar Blue) was a premier jazz site in the 1940s, attracting the top names in the genre. The Columbia Avenue location (now renamed as Cecil B. Moore Avenue) was a centerpiece of the neighborhood known as the "Golden Strip" where there were no fewer than one-dozen thriving jazz clubs. In 1964, three days of rioting, driven by claims of police brutality, destroyed more than two-hundred businesses on and nearby the largely black Columbia Avenue stretch and the jazz scene came to an abrupt, and almost complete end. With top venues such as Crystal Ball, 820 Club, Spider Kelly's, and North West Club now gone, it would be a slow—and somewhat diluted—rebuilding effort to bring a robust jazz scene back to Philadelphia.