Nicknamed "Deedles" as a child (her mother's endearment), Tacoma-born Schuur grew up steeped in traditional American jazz, courtesy of both parents: David Schuur was a local police captain and amateur pianist, and Joanie Schuur kept a formidable collection of Duke Ellington and Dinah Washington albums in their suburban-Seattle home. Not surprisingly, Dinah Washington is often listed as Schuur's major vocal influence. She learned the iconic singer's "What a Difference a Day Makes" while still a toddler and began developing her own rich, resonant vocal style. Jazziz Magazine describes her approach as one that encompasses her whole lifetime of singing: "Schuur's vocal chops move from little-girl innocence to bawdy-mama blues in a hair's breadth, but always at the service of the song." Schuur is also an accomplished pianist, accompanying herself onstage as well as on many of her recording projects. Her most recent album is an homage to two of her important mentors, both jazz giants: Frank Sinatra and Stan Getz

Jonathan Karrant is an American singer born in Fort Smith AR. His album, “On and On” hit #4 on the Billboard Jazz charts and was released on January 8th, 2013. It features such songs as “Don’t Let Me Be Lonely Tonight”, and “Doodlin’” as well as the title track, and was produced by Tyler Monks, with pianist Josh Nelson, bassist Rob Thorsen, guitarist Mark Shapiro, and drummer Duncan Moore. “A voice, romantic without being cloying, warm but not forced, Jonathan carries songs with an emotional weight that reaches your soul. At the same time he can swing with the kind of jazz suave that was patented by Mel Torme.” Jazz Corner 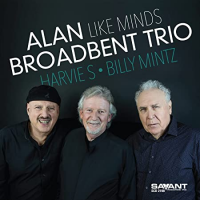