Largely self-taught, Red Garland established a reputation as a solid post-bop mainstream player in the 50s, playing with many of the most famous jazz musicians of the time. He achieved international fame in the late 50s as part of the Miles Davis quintet. He went on to lead his own groups, but then retired in 1968, a victim the declining demand for jazz. He reemerged in 1976 and performed regularly until his death in 1984.

Garland was known for his eloquent middle-of-the-road style. A fertile, often moving improvisor, he developed a characteristic block chord sound by combining octaves with a fifth in the middle in the right hand over left-hand comp (accompanying) chords. The style has been much imitated.

William M. "Red" Garland was born March 13, 1923, in Dallas, Texas. He came from a non-musical family: his father was an elevator operator at the First National Bank. His first instrument was clarinet and studied alto saxophone with Buster Smith, a well-known Texas saxophonist, who was a strong influence on Charlie Parker. Garland only started on piano in 1941, when he was 18, and in the Army. Stationed at Fort Huachuca, Arizona, he heard a pianist named John Lewis play night after night in the recreation room-this was not the famous John Lewis of the Modern Jazz Quartet. Finally giving in to his fascination with the instrument, Garland asked the pianist to teach him. Since he had learned to read music under Buster Smith he didn't have to start from zero. Garland his entire days practicing and made rapid progress. At that time he was also a semi-professional prizefighter, a welterweight, and once lost to Sugar Ray Robinson. There was a time when he had to decide whether to follow boxing or music as a career, and although he chose music, he was left with a broken knuckle as a souvenir of his road not taken.

Garland also studied with another Army pianist, Lee Barnes. By the time Garland left the service, he was learning on his own from recordings. His main influences at that time were Count Basie and Nat Cole, from whom he drew lessons in touch, phrasing and conception. He also learned from James P. Johnson, Luckey Roberts, Teddy Wilson, Bud Powell and Art Tatum. Tatum was his favorite, and he knew he cold never play like he could.

In 1945 Garland played his first gig on piano with Fort Worth tenor player Bill Blocker. It was less than five years after he had begun studying piano. Then traditional jazz trumpeter Oran "Hot Lips" Page came through town. Word spread around that Page's pianist had quit and he was looking for a new one. Garland had intended to attend the dance Page was playing at anyway, so after his gig he stopped by. Four pianists, including Garland, played for Page that night, right out of Page's book of arrangements. Garland went home to bed after the dance and thought no more about it.

Then at about five in the morning there was a loud knocking at the door. Garland's mother thought it had to be the police and suspected her son of having done something wrong. But it was Page and Garland's old teacher Buster Smith.

Garland refused at first, thinking he wasn't ready, but Page and Smith talked him into it. Garland was on the road. He enjoyed working with Page, admiring his strength and versatility. He stayed with Page for several months until the tour ended in New York. There Garland decided to look for work, and found it in small clubs. Art Blakey heard him and recommended him to singer/bandleader Billy Eckstine, who was always looking for cutting edge musicians for his big band. At various times he employed Dizzy Gillespie, Charlie Parker, Fats Navarro, Dexter Gordon, Gene Ammons, Stonny Stitt and Miles Davis. Eckstine accepted Blakey's recommendation, and Garland was hired, touring on Eckstine's bus for six weeks. It turned out to be a new chapter in his musical education.

Survival in the Big Time

Back in New York, Garland concluded his stay in Eckstine's band to join with tenorman Eddie "Lockjaw" Davis playing in a variety of clubs and with a variety of bands. One night, while playing at Minton's Bud Powell came in and insisted Garland yield the piano bench to him. When Powell played, Garland was so overwhelmed he gave him the gig. But then he started visiting Powell frequently at his home and learning from him. They became friends, and Powell became Garland's most important influence-after Art Tatum, whom Garland put in the superhuman category. He received some coaching from Tatum too. One night at Luckey's Rendezvous, a piano-only club owned by Luckey Roberts, Tatum told him to stop forcing the piano, to let it "play itself" and gave him some arpeggios to work on.

In 1947 Garland began a two-year stint at the Blue Note club in Philadelphia, the main venue for modern jazz in that city. While playing in the house rhythm section there he accompanied Charlie Parker, Miles Davis, Fats Navarro, Bill Harris, Flip Phillips, Charlie Ventura and Bennie Green. In 1949 jazz legends tenor saxophonist Coleman Hawkins and trumpeter Roy Eldridge hired him for their band. This turned out to be the key group for Garland, since after that word began to spread that he was an exceptional player. Lester Young and the Ben Webster hired him, and soon he was receiving more calls from famous players than he could handle.

By the early 50s Garland's reputation with the public was strong enough for him to get work as leader of a trio. Then in 1953 he received his first call from Miles Davis, who was trying to form a group of his own for the first time. Davis didn't succeed that time, so Garland stayed with his trio and with Lester Young. Garland made one recording session with Davis and drummer Philly Joe Jones in mid-1955, while still with Young.

Finally, in October of 1955 Davis called Garland again and said he was ready to form a quintet. He had originally planned to include Sonny Rollins and Max Roach, but they now had other commitments. Garland suggested Philly Joe Jones on drums and a young tenor player who was based at the time in Philadelphia: John Coltrane. Miles already knew of him, since Coltrane had been working with Dizzy Gillespie and Johnny Hodges. Miles added Paul Chambers on bass. The group opened at Anchor's Inn in Baltimore.

It was a perfectly balanced rhythm section, with Garland tending to play conservatively, acting as anchor for the extravagant centrifugal playing styles of Coltrane, Jones Davis and Chambers. He stayed with Davis until 1958, when according to Davis, Garland got at mad at Davis when Davis was trying to direct him during a recording session with Cannonball Adderley. After that, Davis's music went in a more modal direction, and he replaced Garland with Bill Evans.

Garland never got into modal jazz. He stayed playing primarily standards, show tunes and blues with occasional jazz tunes from the bebop era. He didn't like the direction Miles or Coltrane went in after he left Miles's band.

Garland continued leading his own trio, but the jazz scene was contracting, and he didn't feel up to fighting against the times. So in 1968 when his mother died, he returned to Dallas, where he retired from performing until 1976. Then he began playing locally in Dallas at a club called, appropriately enough, the Recovery Room. In 1978 he made a comeback at the more nationally visible Keystone Corner in San Francisco, his first gig outside Dallas in 15 years. He had been sheperded out of retirement by the famous producer Orin Keepnews.

Garland continued a modest performing schedule up until his death by heart attack at age 60, April 23, 1984. Style Red Garland became widely known for his distinctive block chord approach to melody playing, which has been widely imitated. In a block chord style, both hands sound on every note of the melody. There is no separation between right melody and left hand comping (accompanying). It is a device which produces a lot of sound out of the piano, so is ideally suited as the climax of a solo. Other pianists known for their block chords include George Shearing, whose block chords span an octave with the melody on top and bottom, and Bill Evans, who tended to drop the second note from the top of Shearing's formation down one octave, spreading out the voicing into what became known as the "drop 2" technique.

Garland's block chords are at the same time easier to execute and produce more sound out of the piano, although they lack the harmonic subtlety of Evans' approach. In Garland's style the right hand plays octaves and fifths over standard modern jazz voicings in the left, with both hands sounding on every note of the melody. Garland maintained an absolute paralellism of his perfect fifth above the bottom melody note, and the resulting dissonances (the fifth above the seventh is the #4) came to characterize his style. Although this was the most characteristic thing Garland played, it certainly wasn't the only thing.

His impeccable rhythm fueled perfect single-note melodic lines. In particular he was a master at extracting a special poignancy from minor blues. An economical player who chose his notes wisely, he was also an adept at spontaneous counterpoint, and he knew how to build a tune slowly, to draw the audience in gradually.

One often gets the impression that he is playing in perspective, furnishing foreground, middle and background as a painter might. A prominent phrase in the piano's middle register s answered by a distant tinkling , and suddenly everything is overwhelmed by a series of hammered ascending chords. A perfect little exercise in counterpoint suddenly emerges from the bridge of a popular song, continues without seeming to heed the transition back to the main verse, and modestly resolved itself in its own sweet time. One could listen to this sort of playing all night, and perhaps one should. 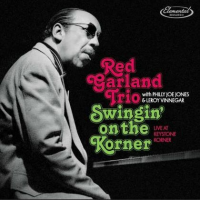 Swingin' on the Korner

All Kinds Of Weather 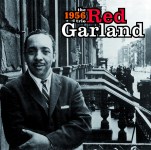 All About Jazz musician pages are maintained by musicians, publicists and trusted members like you. Interested? Tell us why you would like to improve the Red Garland musician page.