Born 27 May 1948, Philadelphia, Pennsylvania, USA, Copland was a part of the vibrant music scene in Philadelphia as a saxophonist before going to New York where he met John Abercrombie and also played with Chico Hamilton, and others. He experimented with the electric alto but gradually became dissatisfied with the direction his music was taking and, leaving New York, quit playing the sax in order to study piano. He was gone for almost a decade but upon his return to the jazz world in the mid-80s his piano playing was a revelation, his own vividly original style firmly in place. As a sideman he played with Bob Belden, Jane Ira Bloom, Joe Lovano, Tim Hagans, James Moody, Wallace Roney and many others. But his career as a sideman in the Apple was relatively short-lived; Copland began recording and touring in trio with Gary Peacock and Billy Hart (At Night/Sunnyside, Paradiso/Soul Note) In the nineties, his reputation spread owing to three legendary recordings with the Savoy label, which put him on the road in an All-Star quintet (Randy Brecker, Bob Berg, and Dennis Chambers), and later in quartet with guitarist John Abercrombie, Drew Gress, and drummer Hart. Copland has enthralled audiences not only in trio and as a solo pianist, but also as a duo partner without peer—as attested by his duo recordings with Greg Osby (Night Call, Round and Round/Nagel-Heyer) and Gary Peacock (What It Says/Sketch). 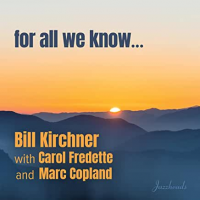 Label: Self Produced
Released: 2022
Track listing: All of You; Some Other Time; Dreamer; Beautiful Friendship; A Time for Love; Zingaro; For All We Know.

Last week we took a look back at some of our favorite songs released in the first six months of the year. This week we're back to our uncontrollably growing pile of beautiful new and upcoming albums.Happy listening!PlaylistBen Allison “Mondo Jazz Theme (feat. Ted Nash & Pyeng Threadgill)" 0:00 Fred Pallem & ...

Bill Kirchner: For All We Know

Carol Fredette was a lovely and much-admired singer who see-sawed between cabaret and jazz. When she sang jazz, her voice grew hushed, as if telling you a secret. It also could become husky and rich, as on songs like This Is Always and Long Ago and Far Away. Born in 1940, she started singing right after ...

Pianist Marc Copland crossed paths with guitarist John Abercrombie in the early '70s, playing in drummer Chico Hamilton's group. Copland was, at the time, a saxophonist. The collaboration there began a fifty year friendship and multiple Abercrombie/Copland collaborations . Abercrombie passed away in 2017. John is Copland's eulogy for him, solo piano renditions of a set ...