Lisa Rich was one of the most promising jazz artists of the 1980s, an adventurous jazz singer with a very attractive voice. When bad health knocked her out of action in 1991, putting a stop to her performing career, Lisa became a well-respected and influential vocal teacher. But now, several decades later with the release of her previously unheard and superb third album, 1987’s Highwire, she is poised for a comeback.

Growing up in Baltimore, she remembers, “My Dad played many records by jazz singers (his favorite was June Christy), along with Duke Ellington and classical music. I was really attracted to the vocalists from an early age, When I was eight I started piano lessons and at 13 I got my first guitar. I put together a little group and we used to play at parties singing folk music.”

Attending the University of Maryland was a bit frustrating for Lisa because they did not have any jazz classes, only teaching classical music. “I met Melissa Manchester during a visit to New York and she said that if I moved up there, she would introduce me to her singing and theory teachers and that her husband would help me get gigs. I did that and got the education that I couldn’t get at school where they were ruining my voice!”

For a time, Lisa performed rock in a traveling show band as a backup singer and dancer. “The guy who led the group did not want to do the opening shows, just the two main sets. Because of that, I had a chance to work with a wonderful jazz trio. I discovered that jazz was what I was meant to do and that it was the music where my voice really sounded at its best.” Soon she got off the road, studied jazz, picked up valuable experiences, and made her first record, Listen Here. “I did not want to sing a lot of standards because I thought my forte was picking out unusual songs such as those by Dave Frishberg, Bob Dorough and the type of ballads recorded by Irene Kral and Alan Broadbent.” She used her working band for Listen Here, recorded all of the music in six hours, and put it out on her own label. It sold well.

By the time Listen Here was recorded, Lisa Rich had found her style. A superior scat singer who also interpreted lyrics with sensitivity and deep understanding, she always swung at every tempo. While part of the jazz tradition, she was quite original in her ideas, adding to the legacy of the music,

Among the songs on Listen Here, which range from “Shaker Song” and “Spring Can Really Hang You Up The Most” to Chick Corea’s “Time’s Lie” and even “Can’t Buy Me Love,” was Clare Fischer’s “Morning.” Fischer enjoyed Lisa’s arrangement of his song so much that he wanted to make a record with her. Since Fischer recorded for Albert Marx and the Discovery label, Marx soon arranged to reissue Listen Here on Discovery, following it up by the singer with Fischer’s quartet on 1985’s Touch Of The Rare.

The future appeared unlimited for Lisa Rich. Among the highlights of her next five years was being featured at several concerts with the Baltimore Symphony Orchestra, performing at a series of historic concerts in China (the first time that American jazz had been played in China since 1949), and singing in India in 1990. She was the recipient of three grants from the National Endowment of the Arts. Lisa performed at The Kennedy Center, The Smithsonian Institution (as an artist in residence) and was featured many times on National Public Radio and Voice of America. Her recordings were recommended by Billboard and Downbeat magazines. Along the way she worked with such notables as pianists Michael Wolff, Marc Copland, Clare Fischer, Reuben Brown and Loonis McGlohan, guitarist Vic Juris, and bassists John Patitucci, Steve LaSpina, Cameron Brown, and Drew Gress. She was cheered on by such mentors and admirers as Ethel Ennis and Mark Murphy.

Her 1987 recording Highwire, which is being released for the first time in 2019, shows just how important and delightful a singer Lisa Rich was during the era. Performing with a top-notch rhythm section, she sings five Chick Corea songs plus originals by Ralph Towner, Duke Ellington, Ornette Coleman and Loonis McGlohon along with one standard, “We’ll Be Together Again.” The music is challenging but Ms. Rich is flawless throughout, sounding relaxed even when essaying wide interval jumps. Most of the songs were not originally written to feature singers and the Corea originals (including “Bud Powell”) were each receiving their earliest vocal recording.

And then it stopped. “When I was 22, doctors told me that if I really wanted to be a singer and travel, I’d have to get back surgery.” After having her successes, in 1991 her back problems returned and she started to have a lot of pain every time she sang. Rather than go through the dangerous surgery again, Lisa stopped performing and became a full time vocal teacher. “I had already been teaching and loved it, sharing everything that I have learned with people who are really dying to learn. I especially like teaching students things in private that I had to learn in public. That way when they start performing in public, they have the confidence and the knowledge to make everything work.” Lisa opened her own school, taught privately, conducted workshops and clinics and ran an eight-week course at the Smithsonian. Her philosophy with teaching is similar to how she became such an original singer. “You have to study all of the great vocalists and then get to the point where you don’t sound like any of them because you have found yourself.”

In recent times, thanks to regular exercise and working with a physical therapist, Lisa Rich’s health has improved quite a bit. The desire to sing returned, she got a piano, and she has started working on new material. “At first I didn’t think that my voice would come back but it is returning. Of course I’m older now but I think that I have something strong to offer. I’m putting out the Highwire record because the music is too good not to be released. Now it’s my goal to put myself out there.”

Lisa Rich sums up her life and hopes for the future: “Music is my mentor, my medicine, and I can’t live without it. The creativity keeps me alive and happy. My hope is to record new material and resume singing in intimate settings. I cannot predict the future but my heart is in the right place and I’m never going to quit.”

“She has often been billed as a cool jazz singer, citing early Miles Davis ballads as a principal influence, but her rich repertory includes many genres. Lisa Rich, an internationally known performer—also seen in area clubs such as Blues Alley and an acclaimed recording artist—is a native Washingtonian of whom the city can be proud. Lisa Rich shares her singing technique and artistic insights with class members, offering a rare glimpse of the professional world and a chance to learn insiders' secrets. Class members study a rich repertory of songs ranging from those of both the great masters and unknown composers to Broadway tunes and classics in various popular genres including jazz

“She has often been billed as a cool jazz singer, citing early Miles Davis ballads as a principal influence, but her rich repertory includes many genres. Lisa Rich, an internationally known performer—also seen in area clubs such as Blues Alley and an acclaimed recording artist—is a native Washingtonian of whom the city can be proud. Lisa Rich shares her singing technique and artistic insights with class members, offering a rare glimpse of the professional world and a chance to learn insiders' secrets. Class members study a rich repertory of songs ranging from those of both the great masters and unknown composers to Broadway tunes and classics in various popular genres including jazz. Sessions include instruction in the fundamental techniques of singing  (breathing, tone quality, confidence, etc.), and also expansion of participants' creative possibilities by introducing  and providing varied and imaginative opportunities for self-expression through song in a relaxed setting.” - Smithsonian Institution

“Lisa Rich is a cool, accurate, sophisticated vocal stylist with an ear for the unhackneyed melodic line, a deft sense of time and accurate pitch, which holds up perfectly on very sustained tones. She is a poised and highly professional artist with a good range and superb control.” - Mike Hennessey, Jazz Journal International, London, England

At a time when the economics of the art of jazz singing are certainly not at their best-it is doubly heartening to hear the best recording I've heard since Tom Lellis, a couple years ago, from Lisa Rich. You the listener probably will agree with me that herein your ears will find excellence on many levels. Pitch, tone, improvisation, song selection, and arrangement-just sheer talent, too. Give this young lady the years of vocal employment she deserves and even her excellence will grow...” - Jazz Singer Mark Murphy 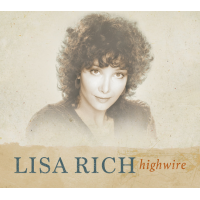 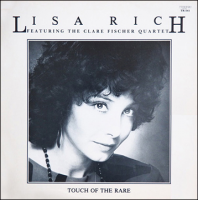 Touch Of The Rare 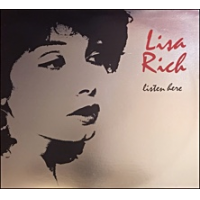 All About Jazz musician pages are maintained by musicians, publicists and trusted members like you. Interested? Tell us why you would like to improve the Lisa Rich musician page.