Irene Kral was not just another jazz singer. She had a delicate style, yet every note was placed with deliberate aim, and she always hit her mark with unerring accuracy. She had a brilliant flair for picking tasty, little-known material, often by up and coming young, jazz-influenced songwriters. She recorded only a small number of albums, often on small, jazz labels and she never sang in a show-off way, never scatted, never belted or raunched out her voice. Most aficionados of female vocalists have never heard of her, and she remains largely forgotten in the jazz history books. Yet her work deserves to be searched out, for her intimate style and purity of tone.

Irene Kral was born to Czechoslovakian parents on Jan. 18th, 1932 in Chicago. Her earliest musical influence was her brother, Roy, who at 18 formed his own big band and would rehearse the group in their parent's basement. While watching her brother and his band, she decided that she wanted to sing. She was 8 years old at the time. Her brother, Roy, became well known later as half of 'Jackie and Roy', a highly influential bebop vocal duo, well-respected in jazz circles.

By the time she was 16, she was singing and accompanying herself on piano, performing at school and the occasional wedding. Her vocal skills impressed her professional musician brother enough for him to take her by the hand to audition for a swinging Chicago big band, led by Jay Burkhardt. Burkhardt's band had been the starting point for two other singers, who went on to bigger things, Joe Williams and Jackie Cain (who later married her brother, and was the 'Jackie' of 'Jackie and Roy'). A series of jobs with other bands came and went, over the next few years, including a brief stint with Woody Herman.

In 1954, she landed a job singing with a jazz vocal group called the Tattle Tales. She played drums, and sang lead with the group, which traveled from coast to coast, and to Canada, Bermuda and Puerto Rico. The group recorded for Columbia Records, but nothing much came of the records. She stayed with the group for a little over a year. Following her heart to stretch out as a solo artist, she left the Tattle Tales and began picking up the occasional weekend solo job, and auditioning for any band that she thought might be going places.

When she was 25, in 1957, her friend Carmen McRae recommended her to band-leader Maynard Ferguson. The next time Ferguson came through Chicago, she got up on the stand and sang one tune with the band. After Ferguson heard Kral finish singing 'Sometimes I'm Happy', he hired her on the spot and she started that night with no rehearsal. In Fergusons' band she met Joe Burnett, a trumpet and fluegelhorn player, whom she married in 1958. She stayed with the Ferguson band for nearly two years, recording one album with them, before she was offered her own contract to record solo.

In 1959, while in Los Angeles, she became a regular vocalist on The Steve Allen Show. Her exposure on the Allen show led to the recording of her first solo LP for United Artist Records, an entire album of songs written by Steve Allen entitled SteveIreneo. The same year, she cut the LP The Band And I, with the Herb Pomeroy Orchestra, working with legendary saxophonist and arranger Al Cohn. Next. she became the featured vocalist with Shelly Manne and his Men, a popular leader of 'West Coast cool jazz'. She also appeared solo at the Stardust Hotel in Las Vegas. By 1961, Irene and her husband, Joe, had relocated to Tarzana, California, a small suburb of Los Angeles where their daughter, Jodi was born. Their second daughter, Melissa, followed. She limited her yearly out of town performances to a half- dozen choice engagements around the country, in order to spend time with her family.

Throughout her career, she felt like she had been born too late, and had just missed the height of the Big Band Era. She recalled, "When I was in high school, I bought every Woody Herman and Stan Kenton record that came out. June Christy seemed to be in the greatest spot in life, and gave me my first inspiration. I'm sorry I missed hearing some of the really good big bands around earlier, like Jimmie Lunceford's and Billy Eckstine's, and Dizzy Gillespie's first band. Now when I'm old enough to appreciate them, almost all the really good bands are gone." She named a few of her other favorite singers as being Peggy Lee, Sarah Vaughn, Dinah Washington and Helen Merrill.

Although she could swing with the best of them, she thought of herself as primarily a ballad singer. "I love to sing ballads more than anything, and consequently I know three times more ballads as 'up' tunes. I dig tunes that have a warm laziness about them." Jazz vocalist Carmen McRae who, talking about Irene, said, "Besides being a marvelous singer, Irene has great taste in tunes. In fact, I've 'stolen' quite a few from her!"

In 1964, she sang on Laurindo Almeida's Grammy© Award-winning album, Guitar From Ipanema. The following year, she recorded an album of her own, called Wonderful Life, on the small Mainstream label. In addition to her usual choice of great songs, unfortunately, the company insisted that she record three tunes aimed at the Top 40 'teen' market. On these songs, she seems like a fish out of water. Nothing came of the attempt to make her more 'commercial', and the songs stand as the only blemish on her recorded output of classy material.

Ten years passed before she recorded again. She continued to perform regularly at jazz clubs around the country. By the mid 70's, her relationship with her husband, Joe, had begun to deteriorate and shortly after their divorce, she met a Los Angeles disc jockey named Dennis Smith. "They got along wonderfully and really hit it off right," her brother, Roy Kral recalls. "Dennis was the best thing that could have happened to her. It was his love and warmth, and his protection, and his caring for her that brought out this wonderful sound from her, at the time. Before that, her vocal tone had been a little more strident. Her relationship with Dennis brought all this warmth out of her, and that really showed in her singing on the Where Is Love album."

Where Is Love was released in 1975 on the Choice label. On this album of solely ballads, she is accompanied by just piano, thoughtfully played by Alan Broadbent. The material is so laid back, it almost stands still. In the liner notes, she wrote, "This is meant to be heard only during that quiet time of the day, preferably with someone you love, when you can sink into your favorite chair, close your eyes and let in no outside thoughts to detract."

In her 1984 book on women in jazz, Stormy Weather, Lorraine Dahl wrote: "Irene Kral had a lovely, resonant voice with a discreet vibrato, flawless diction and intonation, and a slight, attractive nasality and shaping of phrases that resembled Carmen McRae's. But where McRae's readings tend to the astringent, Kral's melt like butter. She was a master of quiet understatement and good taste."

Her album, Kral Space, was released in 1977, and was a welcome return to the swinging trio sound of her earlier efforts. The album brought together the songs of contemporary jazz songwriters like Dave Frishberg and Bob Dorough, as well as Cole Porter and Jerome Kern. Kral Space was nominated for a Grammy© for Best Jazz Vocal performance. The following year, another quiet album of voice and piano, Gentle Rain was released. Again she was nominated for a Grammy© for her work. Both years, she lost the award to her good friend Al Jarreau. Downbeat Magazine, in its' review of Gentle Rain, had this to say about her voice: "Irene Kral is one of today's most engaging vocalists. Though she doesn't possess a great natural instrument, Kral projects intelligence and emotional depth. This gives her performance a worldly dimension akin to that of Tony Bennett and Frank Sinatra."

Jazz singer/songwriter/pianist Dave Frishberg remembers, "Irene had a definite direction in her singing. I accompanied her many times as I've done for other singers. Usually, when you accompany a singer, there are times when the piano player can lead the singer into different directions. With Irene, she definitely led you and you followed. She knew exactly what she wanted, and she was firmly in command."

"She had a great respect for her own music," remembers her brother, Roy. "Once, she was appearing at Carnegie Hall at one of the jazz festivals, and Jackie and I were driving her in to town. And in the car she was very quiet, just watching the cars passing by. After a long silence, she finally said 'Oh, I want to be so good.' And of course, she was."

Irene Kral died on August 15th, 1978 at age 46, in Encino, CA, after having battled breast cancer for 6 years. She had performed up to three weeks prior to her death. Roy Kral says "she managed to express her pleasure at finally being acknowledged when she said to me, 'It looks like we've finally made it.'"

The Making of Second Chance 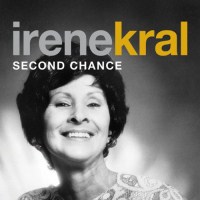 All About Jazz musician pages are maintained by musicians, publicists and trusted members like you. Interested? Tell us why you would like to improve the Irene Kral musician page.