Considered by jazz aficionados to be among the top ten female vocalists of all time, Carmen McRae's distinctive behind-the-beat phrasing, impeccable vocal control, and witty, sometimes acerbic way of conveying a lyric are what set her apart as a singularly great singer. She considered jazz great Billie Holiday to be a musical mentor. But this Queen of Cool had her own sound and style; including an amazing ability to scat. The versatile McRae could swing hard when it was called for; next she could draw out a ballad, savoring each note and syllable without losing audience attention, she was in a class by herself.

McRae was fortunate enough to have been raised by a family prosperous enough to afford a piano and lessons. Early on she expressed a strong interest in an acting career. By age twenty, her interest in music had taken over and she began singing as well as playing the piano. Even at a young age, she was a woman with something to say and throughout her life was recognized not only for her musical talents but for her immense love for verbal expression through musical lyrics.

Her first break was getting hired as an intermission pianist at Harlem's world-famous Minton's Playhouse, a jazz club. She became acquainted with many of the top modern jazz musicians of the time. An important influence was songwriter Irene Wilson, who introduced her to Billie Holiday. Wilson continued to encourage McRae to write music; one of McRae's first attempts at songwriting, "Dream of Life," was recorded by Billie Holiday in 1939.

McRae’s first important engagement as was as vocalist for Benny Carter's orchestra in 1944, she then went on to work with the Count Basie and Earl Hines bands between 1944-46.The periods of 1946-47, she appeared and recorded with Mercer Ellington's band (Recorded under the name of "Carmen Clarke.") She entered into a brief marriage to bebop innovator Kenny Clarke in 1946-49, where she also embraced the technically difficult bebop style as only a few vocalists could at the time.

Although she was working regularly in front of combos and accompanying herself on piano at Minton's, she was at a gig in Brooklyn when she was discovered and signed by Decca Records. Decca released her first album as lead, “Carmen McRae,” in 1954 which led to Down Beat Magazine voting her "Best new female vocalist of 1954," a year when there was plenty of competition for that slot.

Her five-year association with Decca served both to make her a bona fide singing star and to yield what would ultimately prove to be the most consistently excellent series of recordings of her entire forty-year career. These twelve LPs, indeed, rank among the greatest vocal records of all time. McRae is simultaneously cool and cutting-edge sharp, relaxed and swinging, putting over all manner of material in all manner of settings. These range from trios led by pianist Ray Bryant on “After Glow,” or her own piano “By Special Request,” to swinging big bands led by Tadd Dameron on “Blue Moon,” Ralph Burns on “Torchy,” or Ernie Wilkins on “Something to Swing About,” a full-sized string orchestra “Book of Ballads,” “When You’re Away,” and experimental jazz groups boasting such unusual accoutrements as accordion “By Special Request,”and cello “Carmen for Cool Ones.” She also tackles such unusual subjects for a jazz singer as, on “Mad About the Man,” the songs of Noël Coward, and, on “Birds of a Feather,” songs about our feathered friends.

As the years wore on, she developed an increasingly world-weary attitude in her singing. Contrastingly, the freshness and vitality of these, her earliest notable recordings, is remarkable. These tracks announced the coming of a major new artist, one whose light would be hidden no more, and nearly fifty years later they retain their power.

She would go on to record prolifically at a steady clip averaging at least one record per year until 1990. At Decca, Carmen McRae established herself as a versatile perfectionist. Whether the material was outré hard-bop or classics from the Great American Songbook, she made the difficult business of communicating with the listener on a deeper level sound like it was easy.

Carmen's career reached great heights, no little feat for a jazz musician. She recorded, performed nationally and toured internationally in Europe and Japan. She was tapped to participate in Dave Brubeck's audacious jazz operetta "The Real Ambassadors." other performers on this singular opus which was basically a political protest against war and in support of civil rights included Louis Armstrong and the harmony trio of Lambert, Hendricks and Ross. "God Bless the Child," Brubeck's "Take Five," and "I've Got You Under My Skin" became her signature tunes as she cultivated a large international fan base.

The Great American Music Hall in San Francisco was the site of two of her last great recorded achievements. 1987 brought a critically acclaimed live album of duets with avant-garde jazz singer Betty Carter., and she also did “Fine and Mellow, Live at Birdland West,” the same year. One of her final great recordings was 1988's "Carmen Sings Monk," she followed that with a tribute to her close friend Sarah Vaughan, “Sarah, Dedicated to You,” in 1990. She left a recorded legacy of over fifty albums up to the time of her death, and then there are over twenty more released since then, well over seventy five total, quite impressive by any standard.

A lifelong smoker, diagnosed with emphysema, she announced her retirement in 1991, after she collapsed after a performance at New York's venerable Blue Note jazz club. She survived merely four more years, dying in 1994.

In January of 1994, Carmen received the Jazz Master Award by the National Endowment for the Arts. She was an expert of rhythm, deft phrasing, and personal, bittersweet ballads. Her enigmatic, dark contralto voice relied upon the ironic interpretation of lyrics that has placed her among the pantheon of female jazz singers. 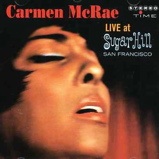 The Sound Of Silence... 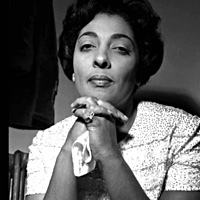 All About Jazz musician pages are maintained by musicians, publicists and trusted members like you. Interested? Tell us why you would like to improve the Carmen McRae musician page.