‘Bridge To Infinity’ is the recording debut of Karina Corradini, a very talented and versatile singer who is equally skilled at straight ahead jazz, ballads, boleros and Latin American classics. Her beautiful tone, powerful voice, highly appealing jazz phrasing, ability to scat at even the fastest tempos, and warmth when caressing ballads make her one of the most promising singers on the jazz and Latin jazz scenes today. Karina Corradini was born and raised in Buenos Aires, Argentina. She began singing professionally at age 18, leading her own jazz sextet to perform at summer beach bars and restaurants. After that summer, she sang on Corrientes Avenue in Buenos Aires, including a twice a week engagement for two years that often included a jam session with veteran musicians. Karina worked various venues (including the Teatro Coliseo, Jazz Club de la Plaza, the Thelonious Bar and Clasica y Moderna) and twice toured Southern Brazil with her group. At the time she moved to the United States in 1999, she was among the busiest jazz singers working in Buenos Aires. Even now, when she returns to Argentina each year to visit family, she is always welcomed to perform at major jazz clubs in Buenos Aires. “I moved to Los Angeles to learn Ella Fitzgerald’s language, and to study music in the land of jazz.” Karina attended Rhiannon’s workshop three times, seminars by Sheila Jordan, Mark Murphy and Kevin Mahogany, and studied music at Los Angeles City College and art at El Camino College. After performing with a rhythm and blues band for a year, she formed her own jazz group and has since performed at a countless number of clubs, restaurants, concerts and festivals, mostly in Southern California. For making her first CD, ‘Bridge To Infinity,’ includes many highs and lows for the singer. The first high, no doubt, was “One of the first people who I mentioned my idea to was my dear friend Christian McBride. He not only got excited for me but also wanted to be part of the project!” In fact, the great bassist, would become the album’s producer and main arranger. However, with Christian’s busy schedule, he was not immediately available. So Karina recorded six songs on a demo with pianist Mahesh Balasooriya, bassist Rene Camacho and drummer Marvin “Smitty” Smith. Using arrangements of Eric Bulling—who had been the writer for the Ella Fitzgerald album Ella Abraça Jobim—the results were so rewarding that those performances are also included on the CD.

When Corradini and McBride finally got together in the studio with tenor and alto saxophonist Zane Musa, trumpeter Nolan Shaheed, pianist Mahesh Balasooriya, drummer Marvin “Smitty” Smith, and percussionist Munyungo Jackson, the other nine songs were completed in only two days. The wide-ranging program includes swinging standards, boleros, a tribute to Elis Regina, bossa-novas, and romantic ballads. Also included is one original from her mentor, pianist Howlett “Smitty” Smith. Karina’s singing is both inventive and beautiful, while Zane Musa’s contributions consistently uplift the music. ‘Bridge To Infinity’ is her first recording to be released to the general public. Finally listeners who live far beyond Southern California will have the chance to appreciate her wonderful voice, musical talents and ability to make every song sound as if it Show less

Karina Vocalist Los Angeles
" While the singer leaves plenty of room for the backing band to stretch out, it’s her vocal presence that captures listeners’ attention. The set closes with a wild, double-time reading of “Lover, Come Back to Me,” McBride and drummer Marvin “Smitty” Smith sending the beat into overdrive. Corradini’s vocals swing just as hard, breaking the melody into staccato fragments that match Zane Musa’s blazing saxophone solo with their animated power". —j.poet DOWNBEAT MAGAZINE, JULY 2019. ———————————————————————————————————————————————————————— "A very talented and versatile singer, Karina Corradini is making her long overdue recording debut on Bridge to Infinity, Tribute to Zane Musa 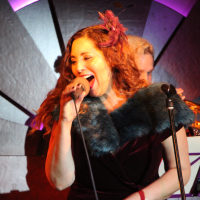 All About Jazz musician pages are maintained by musicians, publicists and trusted members like you. Interested? Tell us why you would like to improve the Karina musician page.