Washington, D.C. based vocalist and producer Coniece Washington sings with heart and soul, captivating audiences with her distinctive, sultry and sweet stylings. In her ascending career, she has uniquely reinterpreted many standards while honoring the legacy of the vocalists who influence and inspire her: Sarah Vaughan, Ella Fitzgerald, Nancy Wilson, Shirley Horn, Billie Holiday, and Carmen McRae.

The accomplished vocalist is well-versed in many genres - from jazz to blues to pop, and everything in between. She is a former member of the renowned Washington Performing Arts Society’s Men and Women of the Gospel Choir and currently leads a number of ensembles featuring prominent jazz musicians from the region. She has begun songwriting and her holiday song, “Snow Covered Stars,” has received radio play.

A sought-after vocalist in the Baltimore-Washington-Annapolis triangle, she has been well-received in venues such as Bethesda Blues & Jazz Supper Club, Twins Jazz, The Carlyle Club, Mr. Henry’s, The Other Barn, The Georgetown Ritz Carlton, The Henley Park Hotel, Café Agape, Jazz Night at Westminster Presbyterian Church and Blues Alley. She performed at popular Baltimore venues An die Musik and Germano’s Piattini, prompting Dr. Renee Allen of WLVS Radio to say, “Coniece Washington sent chills throughout her audience.” She has performed at The Big Easy and other events in New Jersey. Her increasingly popularity has led to performances at the D.C. Jazz Festival, the Rehoboth Beach Jazz Festival, the Mid-Atlantic Jazz Festival and the Annual Preservation of Jazz Festival.

In addition to being a vibrant entertainer, Washington is a skillful and creative producer. She has developed programs such as a Black History Program for Montgomery County Government, a Great Gatsby Show for the Fort Myer VA Officer’s Club and the Annual Awards Entertainment Show for AMVETS Post 8. In 2020 she was contracted to produce the awards show for the American Legion Blake-Blackston Post #77 in Easton, Maryland. She has also performed in Easton’s Avalon Theatre. Stay tuned for upcoming programs on Maryland’s Eastern Shore!

Washington graduated from community college in her native Trenton, New Jersey as a certified dental assistant. In 1976 she joined the U.S. Army, where her vocal talent and passion for music were deepened and refined. While serving in the U.S. and Europe, she performed in night clubs and other venues during off-duty hours. She concurrently earned a master’s degree in human resources from Central Michigan University and was certified as a rehabilitation counselor. She retired from a managerial position at the Washington, D.C. V.A. Medical Center giving her more time to focus on her music. Honing her vocal skills, she studied jazz vocals with pianist Vince Evans. She is currently studying opera and jazz with Dr. Nakia Verner of Prince George’s Community College.

Her love for music was nurtured from an early age at her grandmother’s church, where she sang with the choir and other groups. Another lasting influence came from her uncle, Willie Vereen, who served in the Marine Corps as an entertainer. She met many local singers and dancers at his parties and events. She carries the baton in her own career with the goal of presenting the Great American Song Book with authenticity and integrity. Show less 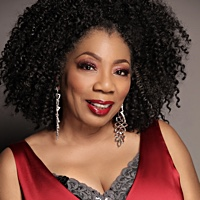 All About Jazz musician pages are maintained by musicians, publicists and trusted members like you. Interested? Tell us why you would like to improve the Coniece Washington musician page.