Billie Holiday ("Lady Day") is considered by many to be the greatest of all jazz singers. In a tragically abbreviated singing career that lasted less than three decades, her evocative phrasing and poignant delivery profoundly influenced vocalists who followed her. Although her warm, feathery voice inhabited a limited range, she used it like an accomplished jazz instrumentalist, stretching and condensing phrases in an ever-shifting dialogue with accompanying musicians. Famous for delivering lyrics a bit behind the beat, she alternately endowed them with sadness, sensuality, languor, and irony. Rarely singing blues, Holiday performed mostly popular material, communicating deep emotion by stripping down rather than dressing up words and lines. "If you find a tune that's got something to do with you, you just feel it, and when you sing it, other people feel it, too," Holiday once explained. According to the Penguin Encyclopedia of Popular Music, "She was the first and is perhaps still the greatest of jazz singers, if the essence of jazz singing is to make the familiar sound fresh, and to make any lyric come alive with personal meaning for the listener."

Holiday's life was a study in hardship. Her parents married when she was three, but her musician father was seldom present and the couple soon divorced. Receiving little schooling as a child, Holiday scrubbed floors and ran errands for a nearby brothel so she could listen to idols Louis Armstrong and Bessie Smith on the Victrola in its parlor. Brutally raped at ten, she was sent to a reformatory for "seducing" her adult attacker; at fourteen she was jailed for prostitution. Determined to find work as a dancer or singer in Harlem, Holiday moved to New York City in 1928 and landed her first job at Jerry Preston's Log Cabin, where her vocals moved customers to tears. Discovered in another Harlem club by jazz record producer John Hammond in 1932, she made her first recording a year later with Benny Goodman's orchestra. She began to record regularly for Columbia, usually under the direction of Teddy Wilson, backed by small studio bands comprised of the day's best jazz sidemen. These included saxophonist and soulmate Lester Young, whose style approximated Holiday's own; it was he who gave the pretty, dignified young singer the nickname "Lady Day."

Intended largely for a black jukebox audience, the Wilson discs were quickly and cheaply made. But Holiday and company transformed them into jazz treasures, immediately appreciated by musicians, critics, and jazz afficianados, if not the public at large. These hundred-odd songs—delivered in a light, bouyant style—are today considered among Holiday's most significant work. Forgoing club engagements in l937 to tour with Count Basie's orchestra, Holiday went on to become one of the first black vocalists to be featured with a white band when she fronted for Artie Shaw a year later. Life on the road proved bitter for the singer, though; racial segregation made simple things like eating, sleeping, and going to the bathroom logistically difficult. Fed up when she could not enter one hotel through the front door with the rest of the Shaw orchestra, Holiday abandoned touring, returning to New York clubs and cabarets as a solo artist.

With Columbia's permission Holiday recorded "Strange Fruit," a controversial song about southern lynchings, for Commodore in 1939. It became a favorite of the interracial crowd for whom she performed at the Cafe Society, a Greenwich Village haunt of intellectuals and the political left. Holiday began to attract a popular following and indulged her taste for slow, melancholy songs about love gone bad, which communicated the hunger and despair that were starting to pervade her own life. Once released, "Strange Fruit" was banned by many radio outlets, though the growing jukebox industry (and the inclusion of the excellent "Fine and Mellow" on the flip) made it a rather large, though controversial, hit. She continued recording for Columbia labels until 1942, and hit big again with her most famous composition, 1941's "God Bless the Child."

Decca, signed her to the label in 1944 to record "Lover Man," a song written especially for her and her third big hit. Neatly side-stepping the musician's union ban that afflicted her former label, Holiday soon became a priority at Decca, earning the right to top-quality material and lavish string sections for her sessions. She continued recording scattered sessions for Decca during the rest of the '40s, and recorded several of her best-loved songs including Bessie Smith's "'Tain't Nobody's Business If I Do," "Them There Eyes," and "Crazy He Calls Me."

By the mid-1940s Billie had been arrested many times for narcotics violations, and after one arrest in 1947, at her own request, was placed for a year and a day in a federal rehabilitation center. Just ten days after being released she gave a concert at Carnegie Hall, but thenceforth was barred by New York City police licensing laws from working in any place that served liquor. The absence of a cabaret card in effect meant that she could never again appear in a New York nightclub.

Recording for Verve from 1952 to 1957, the singer frequently returned to the small group format that best fit her glimmering voice, but by then her instrument had begun to falter from years of abuse. Her desire and range dwindling, her voice scratchy and tired, Holiday still retained her unique timing and phrasing and—when she wanted—her ability to move listeners. Recording many American standards for Verve by Cole Porter, George Gershwin, and Rodgers and Hart, her personal interpretations made them seem new again. While deemed too painful to listen to by some critics, Holiday's later recordings are esteemed by others, who find the singer's ability to communicate at its peak. In High Fidelity Steve Putterman, for instance, judged her Verve recordings "devastating," because "tonal beauty and emotional expressiveness worked inversely for Holiday: The more her pipes gave out, the more penetrating and affecting her delivery became."

Billie made her final public appearance in a concert at the Phoenix Theatre, New York City, on May 25, 1959. She died in Metropolitan Hospital, New York City, on July 17, 1959, of "congestion of the lungs complicated by heart failure."

Time has since diminished the glare of Holiday's frailties and her musical gifts shine brighter than ever. More than technical ability, more than purity of voice, what made Billie Holiday one of the best vocalists of the century, was her relentlessly individualist temperament, a quality that colored every one of her endlessly nuanced performances. Show less 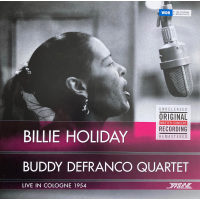 All About Jazz musician pages are maintained by musicians, publicists and trusted members like you. Interested? Tell us why you would like to improve the Billie Holiday musician page.