Betty Carter was born Lillie Mae Jones in Flint, Michigan, on May 16, 1930. At a young age, she began the study of piano at the Detroit Conservatory of Music, and by the time she was a teenager she was slready sitting in with Charlie Parker and other bop musicians when they performed in Detroit. After winning a local amateur contest, she turned professional at age 16, hooking up with the Lionel Hampton band by 1948, billed as Lorraine Carter. Hampton was the man who hung the nickname 'Betty Be-Bop' on her (a nickname she hated, as she found bebop limiting and wanted to do more than just scat), but it stuck, and ultimately she changed her stage name to Betty Carter. At the age of 21, she traveled to New York with the Hampton band and set up home there.

Betty spent the early 1950s as a singer with different group. She did several shows at the Apollo, playing with such notables as Max Roach and Dizzy Gillespie, toured with Miles Davis in 1958 and 1959, and spent much of the rest of the time on the outskirts of the jazz scene. Her refusal to adopt a more "mainstream" jazz style led to difficulty in finding bookings and making recordings. She made her first recordings in 1955 with a then-unknown piano player named Ray Bryant. The album, Meet Betty Carter and Ray Bryant, was little received, and her second set of recordings, with the Gigi Gryce band in 1956, languished unpublished until 1980.

By 1958, she was ready to record again, and another little known album, I Can't Help It, was the result, followed closely by a recording on the Peacock label (a Texas gospel label), Out There. She was developing a reputation as a fiercely independent woman (an attitude she developed based in part on her interactions with Gladys Hampton, Lionel's no-nonsense wife) and a devoted jazz singer, and her popularity among the inner jazz circles was high, but critical and popular acclaim eluded her. She was becoming well-known for her signature style that combined off-beat interpretations of classic tunes and wild scat-singing that never seemed to find the right beat. Even a move to the ABC label for her 1960 album The Modern Sound of Betty Carter did little to help that. She needed a break, and it came in the form of Ray Charles.

Ray Charles, on a recommendation from Miles Davis, agreed to take Betty on tour with him in the late 1950s. Enchanted by her voice and looking for a partner to record a series of duets, he enlisted Ms. Carter in a project that became Ray Charles and Betty Carter. The album, recorded in 1961, became an instant critical and popular smash; the single Baby It's Cold Outside gave Betty her first introduction into the popular music scene (indeed, at the 1997 White House ceremony where President Clinton presented Ms. Carter with a National Medal of Arts, the President said, "Hearing her sing 'Baby, It's Cold Outside' makes you want to curl up in front of the fire, even in summertime."). The sessions took on almost legendary status; after fifteen years in the business, fame had found Betty Carter.

And Betty Carter chose her family. She was raising two sons at the time, Myles and Kagle Redding, and chose to concentrate on that rather than capitalize on her recent success. Other than the 1963 Atco album Round Midnight (which showcased a different side of Betty that many critics strongly disliked), and a very short 1964 United Artists album called Inside Betty Carter, she made no recordings between 1961 and 1968. She still performed, doing club dates mostly around the New York area, but the name of Betty Carter eventually faded back into obscurity again. By 1969, though, Betty was ready to get back into music. The problem was - no one seemed to want her.

She started her road back with a live recording on the Roulette album. Finally - Betty Carter (an apt title) is considered one of her finest works, but it didn't garner much interest at the time. A second live recording, again titled 'Round Midnight, met with the same fate. Unable to drum up enough interest and tired of trying to satisfy the demands of recording companies, she came up with a solution - she founded her own company. Bet-Car was founded in 1971, and would be the soul source of her recordings until she signed with Verve in 1988.

The Bet-Car years produced some of Betty's finest albums - The Betty Carter Album, Betty Carter (later rereleased as At the Village Vanguard), Now It's My Turn, and I Didn't Know What Time it Was - culminating in the December 1979 recordings that became The Audience with Betty Carter, called by some the finest vocal jazz recording ever made. Performances at the Newport Jazz Festival in 1977 and 1978 helped solidify Betty's place in the jazz world, not only as a major vocal talent but also as a discoverer of new talent (including through the years such names as John Hicks, Mulgrew Miller, Cyrus Chestnut, Mark Shim, Dave Holland, Stephen Scott and Kenny Washington).

Her Bet-Car recordings continued into the 1980s with Whatever Happened to Love? and a landmark session with fellow jazz legend Carmen McRae recorded live at a series of 1987 San Francisco dates. By 1988, finally someone took notice of her talents: Verve, on the lookout for under-appreciated jazz singers such as Abbey Lincoln and Shirley Horn, signed Ms. Carter to a contract and immediately set about rereleasing the majority of her old material.

In 1988, she burst back on to the popular jazz scene with Look What I Got, the album that earned her only Grammy award. The next decade produced several more outstanding recordings that featured a more mature sound - not reined in by any means, but perhaps softer, Betty Balladeer instead of Betty Be-Bop. She garnered Grammy nominations for 1990's Droppin' Things and 1992's It's Not About the Melody. She continued to feature young, up-and-coming musicians on most of her albums, a practice broken only on the 1994 album Feed the Fire, considered by some to be her finest work since Audience. Betty remained active in developing new musicians through the Jazz Ahead program, founded in 1993, that brought unknown jazz musicians to New York to work with her. She performed at the White House in 1994, and was a major headliner at Verve's 50th anniverary celebration in Carnegie Hall. She continued to stay active with her teaching right up until her death from pancreatic cancer on September 26, 1998.

With Betty Carter gone, the jazz world has been left a gaping hole that no one artist could ever hope to fill. While other female (and male) jazz singers will come along, it's doubtful that anyone will be able to match Betty's combination of singing talent, compositional ideas, and willingness to teach. It's up to those of us who remain to ensure that her legacy grows and that the generations that ensue will have the pleasure- no, the honor - of sitting home, late at night, and drifting off into Betty Carter's world. Show less

Look What I Got: Betty Carter 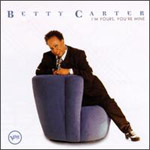 I'm Yours, You're Mine

I'm Yours, You're Mine 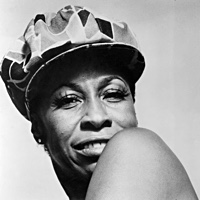 All About Jazz musician pages are maintained by musicians, publicists and trusted members like you. Interested? Tell us why you would like to improve the Betty Carter musician page.