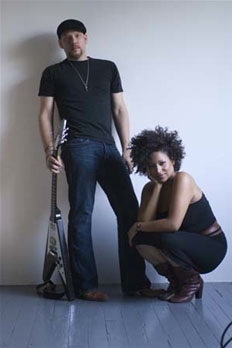 Both risk takers in music and in life, Ray Charles and Betty Carter broke many rules to convey unique vision. Dwight Ritcher & Nicole Nelson have both been heavily inspired by these two, and are paying tribute to them along with an all-star group including Grammy Award winning pianist David Maxwell, and a horn section including brothers John & Scott Aruda on tenor saxophone & trumpet.

Fans of the New York City based blues/soul duo Dwight & Nicole may recall a time when they each led their own popular bands earlier in this decade. Dwight Ritcher, a New Jersey native, moved to Boston and formed the Dwight Ritcher Band. The singer/songwriter & guitarist tapped his deep blues and funk roots to front a high energy, horn driven group, eventually recording two highly acclaimed, if not chart topping albums; “Drive Around Town" and “Radioman". Often sharing the stage with such greats as Otis Rush, Clarence “Gatemouth" Brown, and Buddy Guy, Ritcher carved out his own musical niche and gained a loyal fan base.

Rising up at the same time from a crowd of Boston based vocalists was Nicole Nelson. A standout soul singer from the start, described as “Magnificent" by Maya Angelou, and “A voice for the ages" by the Boston Phoenix; Nelson and her band churned out crowd crushing Etta James & Aretha covers during the first half of her 7 year career. Over time she developed her own unique sound as a songwriter. After a move back to her hometown, Brooklyn, NY in 2004, Nelson teamed up with Ritcher. Blending their voices to create a very original music; the Dwight & Nicole Duo emerged.

The versatility of their current incarnation allows them the luxury of creative options. Some live shows reveal a stripped down duo, just Ritcher's guitar and Nelson's percussion supporting their rich vocals and carrying the crowd. Other shows find them fronting full big bands together, 1940's style. The latter is like stepping into a time warp- no strangers to jazz & swing, Dwight & Nicole recall Jimmy Rushing & Ella Fitzgerald. For fans of that musical era, this is a show to catch. A closer listen reveals inflections of Patsy Cline, BB King, Johnny Cash & Nina Simone. And of course, the real magic is in that non-definable extra something; the element of surprise which keeps the music fresh & very alive. A necessary ingredient when interpreting the songs of such greats as Ray Charles & Betty Carter.

Dwight & Nicole will be focusing much of the Blue Note show on Charles' & Carter's 1961 duet recording “Dedicated to You", a 78 minute album that demonstrates again, Charles' ability to to transform unlikely material into his own, and which showcased (the then unknown) Carter's captivating stream of conscious style. Expect to hear renditions of classic duets such as “Baby it's Cold Outside" and “People Will Say We're in Love" off of “Dedicated to You", as well as Betty”s hit “Mean To Me", and Ray's ubiquitous “Night Time is the Right Time".