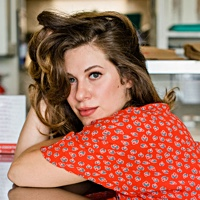 Kalya Ramu is a vocalist, composer and visual artist from Toronto, ON. Ramu has a passion for storytelling and reinventing old jazz music. She has an eclectic taste for music from all over the world, and draws influence from jazz, blues, theatre, R&B and rock’n’roll. She fills her repertoire with rarely recorded, forgotten songs with beautiful melodies and humorous antidotes.

With no previous formal training, Ramu began her singing career at the age of 12, singing at jazz jams and performing with big bands. At 22 she graduated with honors from the Humber College Bachelor of Music Degree Program. Three years later Ramu began writing original Jazz compositions, and on May 10th 2019 she released her debut full-length album Living in a Dream, which included four of her original songs and seven jazz standards. Following this release, one of her original songs was featured on the soundtrack of CBC show Frankie Drake Mysteries.

Ramu’s latest work, Duo (due April 2, 2021), is a short album of all original material performed by piano and voice. All tracks were cowritten with and feature pianist Ewen Farncombe. Ramu brought lyrics and melodies to Farncombe and together they curated the harmony. Duo explores love in its many forms, whether it be towards a partner, a musical genre, a fleeting feeling, or one’s life choices. Kalya’s storytelling jumps between sweet and cynical, never dwelling on the serious

. Influenced by the musical stylings of the 1930’s to ‘50’s, Ramu’s dynamic singing accompanied by Farncombe’s emotive playing evokes nostalgia for a past era. Show less

“She is one of the most captivating vocalists to come along in several seasons.” – Chris Spector, The Midwest Record​​​

​“Ramu's voice has a warmth, depth and maturity to it that belies her 25 years. ” – Sharna Searle, The WholeNote

Please get in touch for private beginner vocal and piano lessons. 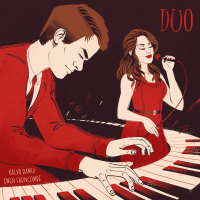 From: Duo
By Kalya Ramu 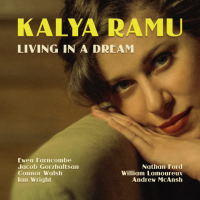 From: Living in a Dream
By Kalya Ramu

All About Jazz musician pages are maintained by musicians, publicists and trusted members like you. Interested? Tell us why you would like to improve the Kalya Ramu musician page.