As a performer, he acted his songs more than he sang them; as a songwriter, hedrew as much from gospel, the blues and folk music as he did from jazz. He preferred to call himself an entertainer, although even that broad term didnotgo far enough: he saw his art as a way to celebrate African-American life andattack racism, and it was not always easy to tell where the entertainer ended and the activist began.

His song “Brown Baby,” recorded by Mahalia Jackson and others, was both a lullaby for his infant son and an anthem of racial pride. Other songs, like “Signifying Monkey” and “The Snake,” took their story lines from black folklore. The album, “We Insist! Freedom Now Suite,” for which Mr. Brown wrote lyrics to the drummer Max Roach's music, was one of the first jazz works to address the civil rights movement. His commitment to art as a tool for social change was most evident in the numerous stage shows he wrote and directed in his hometown Chicago.

Oscar Cicero Brown, Jr. made his earthly debut on October 10, 1926 at Chicago ’s Provident Hospital as the firstborn child of school teacher, Helen Lawrence and Oscar C. Brown, Sr., a prominent lawyer and real estate owner. Oscar was raised in a two-church house hold: his mother attended St. Edmond’s Episcopal Church, and his father was a member, and attorney for Pilgrim Baptist Church for over fifty years. Oscar Jr.’s verbal skills stood out early in his academic career as evidenced by thefact that he often took first-place in “elocution” contests. He attended Willard Elementary and Englewood High Schools, and by age 15, he had launched his professional career in Studs Terkel's children's radio series, called “ Secret City .” His father, however, encouraged him to pursue a college career and study law, with the hope that he would take over the family business.

As a result of two “double promotions” in elementary school, he was only sixteen years old when enrolled at the University of Wisconsin in the fall of 1943. After attending several colleges and universities, including Lincoln University (Pa.) and the University of Michigan, where he excelled in English composition, but failed everything else, it became clear that creative writing was his primary interest, rather than academic study or the business world.

In his twenties, he returned to work in radio, spending five years as the “world’s firstNegro newscaster,” for a Chicago program called “Negro Newsfront,” where he also managed to include a musical menu, as well as poetic works by Countee Cullen and Langston Hughes. In addition to his media work, he continued to dabble in real estate, advertising, and public relations; but he soon turned to activism”both inside and outside electoral politics. One of his first jobs along these lines was as program director for the progressive United Packinghouse Workers union. Activism was part of his father’s legacy”Oscar Sr. had served at the helm of the Chicago NAACP, but had also been part of a nationalist effort to develop a 49 th state for African Americans. In 1948, Oscar ran for the Illinois legislature on the Progressive Party ticket, and for the U.S. Congress as a Republican in 1952”a party he conveniently selected in order to get on the ballot. Oscar was actually a member of the Communist Party from the time he was 20, to his resignation in 1956 at the age of 30, when he concluded that he was “just too black to be red.” From 1948 to 1950, Oscar played a key role in Richard Durham’s “Destination Freedom” Black Radio Days series. He then went on to serve two years in the Army, after which he began to pursue his hobby of composing songs by singing a little in local nightspots.

The turning point in his career came around 1960. The Brown family were neighbors of the award-winning playwright, Lorraine Hansberry’s family. When “A Raisin in the Sun” debuted in Chicago before it’s New York premier, Oscar met Hansberry ’s husband, Robert Nemiroff, who worked for a New York based music publishing company. Nemiroff in turn introduced Oscar’s music to New York , which led to a recording contract with Columbia records and the classic recording, “Sin and Soul,” the debut album that made Oscar Brown Jr. a national celebrity.

The Los Angeles Times described it as “a mosaic of poetic and musical images [with] lyrics for such popular jazz instrumentals as Nat Adderley's “Work Song,” Bobby Timmons' soul jazz tune “Dat Dere” and Mongo Santamaria's “Afro Blue”; as well as “the socially charged “Bid 'Em In,” a vivid re-creation of an auctioneer's call of a female slave sale; and the lullaby “Brown Baby,” written for his newborn son, and recorded by such giants as Mahalia Jackson, and Lena Horne.

Oscar went on to perform at such venues as the Village Vanguard, and tour with Miles Davis, Aretha Franklin, John Coltrane, Dizzy Gillespie, Nancy Wilson and Cannonball Adderley; composed the lyrics for the Davis classic, “All Blues,” and collaborated with Max Roach on the landmark civil rights composition, the “Freedom Now Suite.” His magnum opus came in 1961, with the production of “Kicks & Company,” directed by Hansberry, and co-produced by Nemiroff. Backer s’ auditions and fundraising activity reached a new level when Oscar Brown. Jr. made an unprecedented two hour appearance on the NBC’s “Today Show,” at the invitation of host Dave Garroway and subsequently raised over $400,000. OBJ was on his way, but sudden found it necessary to stage a “comeback” when the show “Kicks & Company” closed shortly after it previewed, in Chicago ’s McCormick Place in 1961. He didn’t ponder the circumstances but instead focused on appearances with jazz royalty earned him great critical acclaim from coast to coast.

His one man show, “Oscar Brown Jr. Entertains,” in London two years later, resulted in his being hailed: “a musical genius,” “the high priest of hip,” and “all the great ones rolled into one.” Before leaving for England , Brown hosted a television series “Jazz Scene USA,” taped in Los Angeles, where he met singer/dancer Jean Pace —ultimately to become his wife.

Oscar’s production of “Joy ‘66” brought the couple to Chicago , where within a year, they developed three more musicals entitled “Summer in the City,” “Lyrics of Sunshine and Shadow [with Phil Cohran],” and “Opportunity Please Knock.” “Opportunity Please Knock” was produced in 1967 in conjunction with a youth gang known as the Blackstone Rangers, and gained national recognition when gang members appeared on the Smothers Brothers CBS television show. Their work with the gang resulted in thepair being invited in 1968 by newly elected Mayor Richard Hatcher of Gary , Indiana,to conduct a summer project with young talent in that city. Among their “discoveries” were The Jackson Five, and actor/singer Avery Brooks.

Brown and Pace moved to San Francisco the following year where Oscar turned the comedy production “Big Time Buck White” into a musical, which ran successfully in the Bay area, before coming briefly to Broadway where it featured Muhammad Ali in the title role. Meanwhile, Brown and Pace had joined with Brazilian musicians Luiz Henrique and Sivuca in the production of “Joy 69,” which ran over a year in San Francisco, New York, and Chicago . The next decade found Oscar Brown Jr. as an artist-in-residence directing his works at Howard University in Washington , D.C. , Hunter College in New York and Malcolm X College in Chicago .

In the early 1970s, Brown premiered a musical drama in Washington, DC, that was underwritten by Howard University, entitled “Slave Song,” written in iambic pentameter and rhymed quatrains. By 1975, Brown had recorded 10 albums, and re-staged and starred in the hit production “Evolution of the Blues” in San Francisco .

Later that year, Oscar was featured in a (CBS) WBBM-TV special, “Oscar Brown is Back” in Town,” which won him two local Emmy Awards. Later Oscar hosted the 13-week PBS program “From Jump Street : The Story of Black Music,” and was a regular actor on the television series, “ Brewster Place ,” starring Oprah Winfrey. He appeared in several other acting roles, including episodes of “Roc” and the PBS special “Zora Is My Name,” written by Ruby Dee. Oscar Brown Jr. has composed over a thousand songs and more than a dozen full-length theater pieces. After an absence of 20 years from the recording scene, Oscar’s first CD, “ Then and Now,” was releasedin 1995 on the Weasel Disc label.

More recently, in 1996, “Sin and Soul . . . And Then Some,” his original Columbia recording was re-released as a CD, with five new songs. A compilation of all Mr. Brown’s Columbia releases was released recently in Europe , entitled: “Kicks: the Best of Oscar Brown, Jr.” that includes his classic collaboration with Gwendolyn Brooks on her poem, “Elegy for A Plain Black Boy.” Two of his seven children grew to become performers, with whom he regularly worked until his son, Oscar “Bobo” Brown III, an accomplished bassist, vocalist, and composer, died in a tragic automobile accident on August 12, 1996, at the age of 39.

In April 2001, he and his daughter Maggie made a live concert recording at the Hot House in Chicago resulting in a full-length concert disc that was released in 2002 on Mag Pie Records. A performer until the end, last October, Oscar opened “Jazz at Lincoln Center” in New York , and in March of this year, he celebrated the premier of Donnie Betts’ “Music is My Life, Politics My Mistress,” a documentary film about hislife at the Pan African Film Festival and performed on the Tavis Smiley Show on PBS.

He also made several appearances on hip-hop impressario Russell Simmons’ Def Poetry Jam on HBO and had recently revived his production of “Great Nitty Gritty,” a show about gang violence that he had first staged 20 years earlier with young residents of the Cabrini Green housing project. Oscar served as Regents Professor at the University of California at Riverside , and rendered a “command performance” for the California State Legislature, who honored him with a statewide “Oscar Brown Jr. Day” tribute.

Likewise, Mr. Brown reigned as the 2002 “Senior of the Year” for his hometown, Chicago. Oscar Brown, Jr. actor, director, playwright, songwriter, lyricist, activist, essayist, and television host, called “the High Priest of Hip and the Grandpap of Rap” was a man of such eclectic talents that jazz critic Leonard Feather called him “the most hyphenated figure in show business.” He departed this life on May 29, 2005 in Chicago . Peter Keepnews stated in the New York Times obituary that: Mr. Brown was most often described as a jazz singer, and he initially achieved fame by putting lyrics to well- knownjazz instrumentals like Miles Davis's “All Blues” and Mongo Santamaria's “Afro Blue,” but efforts to categorize him usually failed. 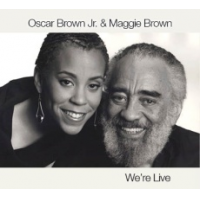 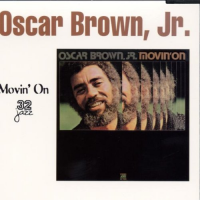 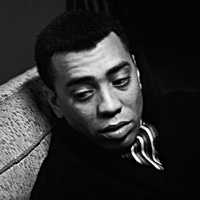 All About Jazz musician pages are maintained by musicians, publicists and trusted members like you. Interested? Tell us why you would like to improve the Oscar Brown Jr. musician page.