Organ master Jimmy McGriff may have studied formally at Juilliard and at Philadelphia's Combe College of Music, but there's nothing fancy about his music. It's basic to the bone, always swinging and steeped in blues and gospel. McGriff's brand of jazz is about feeling. “That's the most important thing,” he says.

Blues has been the backbone of most of the major jazz organists, including Jimmy Smith and Jack McDuff, but throughout his 42-year recording career, McGriff has stuck closer to the blues than any of them. “People are always classifying me as a jazz organist, but I'm more of a blues organ player,” he insists. “That's really what I feel.”

McGriff's recordings of “I've Got a Woman” and “All About My Girl” were r&b and jukebox staples during the Sixties. With McGriff Avenue, his fourteenth album for Milestone (counting the five he's cut as co-leader with Hank Crawford), the Hammond organ grinder remains true to the blues grounding for which he's famous. The way things turned out, McGriff Avenue was not just another record date for the organist and his sidemen, as producer Bob Porter recounts in the CD notes. Porter had booked a noon session at Rudy Van Gelder's New Jersey studio for September 11th, 2001, but that morning he quickly realized—especially since bridge and tunnel access to and from Manhattan was cut off soon after the World Trade Center towers were hit—that the session was not going to take place as scheduled.

When the record date was rescheduled for six weeks later, some personnel adjustments were necessary. Although Bill Easley, Ronnie Cuber, and bassist Wilbur Bascomb were able to make both days of recording, Purdie was replaced on the second day by Don Williams. Guitarist Rodney Jones couldn't make the first session, but he contributed the funky title track (and was ably replaced by Melvin Sparks-Hassan).

Saxophonist Gordon Beadle, a veteran of Duke Robillard's band, is new to the McGriff orbit, but the other players have extensive histories with the organist. The great drummer Bernard Purdie has appeared on most of McGriff's Milestone discs, and Don Williams has been a member of McGriff's touring band for years. Likewise Rodney Jones, Ronnie Cuber, Melvin Sparks-Hassan, Wilbur Bascomb, and Bill Easley are all McGriff familiars who deliver the “gospel/blues-kinda flavor” the leader finds much to his liking. The performances on the McGriff shuffle “All About My Girl,” Jimmy Forrest's “Soul Street,” and the sanctified “America, The Beautiful” make that absolutely clear.

James Harrell McGriff was born on April 3, 1936 in Philadelphia, long the capital of the jazz organ world. Such seminal jazz organists as Milt Buckner and Wild Bill Davis frequently passed through town, and it was there that Jimmy Smith laid the groundwork for modern jazz organ. Other outstanding organists associated with the City of Brotherly Love include Doc Bagley, Shirley Scott, Richard “Groove” Holmes, Joey DeFrancesco, and Charles Earland. In fact, Earland, who had played saxophone on McGriff's very first recording, a 1959 single on the White Marsh label titled “Foxy Due,” learned the organ from McGriff.

Although both his mother and father were pianists, McGriff started out on bass and saxophone, later picking up drums, vibes, and piano. He served as an MP during the Korean War and spent two and a half years as a Philadelphia policeman. While on the force, he moonlighted as a bassist at Pep's Showboat, playing behind blues singer Big Maybelle and other stars of the Fifties. The lessons he learned as a bass player would later turn up in his signature organ style, which is marked by strong, swinging bass patterns.

After leaving law enforcement, McGriff turned his focus to organ and studied locally at Combe and in New York City at Juilliard, as well as privately with Jimmy Smith, “Groove” Holmes, Milt Buckner, and classical organist Sonny Gatewood. Of greater importance to McGriff's musical development, however, were his experiences as a young man at Philadelphia's Eastern Star Baptist Church. “They talk about who taught me this and who taught me that, but the basic idea of what I'm doing on the organ came from the church,” he says. “That's how I got it, and I just never dropped it.”

In 1962, while McGriff was performing in Trenton, New Jersey, a scout from a tiny record label called Jell was struck with the organist's arrangement of “I've Got a Woman” and offered him a contract. As McGriff's single was taking off, Sue Records in New York purchased the master and it became a smash, peaking at No. 5 on Billboard's r&b chart and at No. 20 on the pop list. With that and such subsequent Sue singles as “All About My Girl,” “M.G. Blues,” and “Bump De Bump,” the organist staked out a musical turf all his own, somewhere between the jazz of Jimmy Smith and the r&b of Booker T. & the MGs. After leaving Sue, McGriff recorded prolifically for such labels as Solid State, Blue Note, Capitol, United Artists, Groove Merchant, and JAM. He also cut two albums with the great blues singer Junior Parker.

Renewed interest in the Hammond organ over the past several years has substantially increased the demand for McGriff's music. “People that didn't listen to organ things before listen now,” he says. “I'm playing jobs that ordinarily I wouldn't play.”

McGriff had used a Hammond B-3 organ at the onset of his career but in recent years has been playing a modified model known as a Hammond XB-3. “The one I got is special 'cause it's built for me,” he says. “I can separate the top manual against the bottom manual. I get strings on it, and I get a different kind of bass.”

With McGriff Avenue, Jimmy McGriff serves up another satisfying set of the type of blues, swing, funk, and gospel-derived sounds for which he's known and loved. It's music from the soul that, as always, feels mighty good. Show less

Escape To The Alluring Sounds Of Vintage Exotica On "Technicolor... 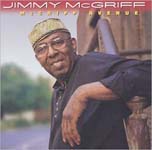 All About Jazz musician pages are maintained by musicians, publicists and trusted members like you. Interested? Tell us why you would like to improve the Jimmy McGriff musician page.