Richard Arnold "Groove" Holmes, Born Richard Arnold Jackson (Camden, New Jersey) was a jazz organist who performed in the hard bop and soul jazz genre. He is best known for his 1965 recording of "Misty," and is considered a precursor of acid jazz.

Holmes burst onto the music scene in the early 1960s (his first album, on Pacific Jazz with guest Ben Webster was recorded in March 1961). An African-American, literally a heavyweight (approximately 300 pounds) and physically rotund in stature, he gained immediate respect with an inimitable style of his own. His sound was immediately recognizable in the upper register, but even more so because of his virtuosity in creating, undoubtedly, the most rapid, punctuating, and pulsating basslines of all the jazz organists. His Prestige recording of "Live at the Front Room" recorded in Newark, New Jersey is one of the great jazz performances on the Hammond-B3. He (Holmes) seemed to make fire jump from the Hammond organ the night of that live recording. Though his recording years were relatively brief, as he died at the less than advanced age of 60, he established a recognition that is stellar within the community of notable jazz organ giants, i.e. Jimmy Smith (The Sermon), Brother Jack McDuff (A Real Good 'Un), Jimmy McGriff (I've Got a Woman). His style whether ballad, standard, or uptempo straight ahead, was always soulful, as his nicknamed implied, he was a "Groove."

Holmes died after a long struggle with prostate cancer, having performed his last concerts on a wheelchair. One of his last gigs was at the 1991 Chicago Blues Festival with his longtime friend, singer Read more 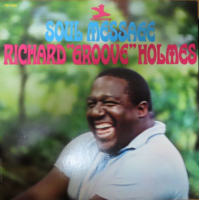 Giants Of The Organ... 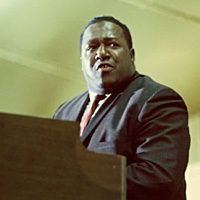 All About Jazz musician pages are maintained by musicians, publicists and trusted members like you. Interested? Tell us why you would like to improve the Richard "Groove" Holmes musician page.