Brother Jack McDuff, was one of the handful of leading exponents of the soul jazz style created on Hammond organ by Jimmy Smith in the late 1950s. The instrument at the heart of the soul jazz style was the Hammond B-3 organ, usually in the company of electric guitar, drums, and often tenor saxophone. The emergence of Jimmy Smith as a major star on the instrument sparked its widespread use in jazz and pop music in the early 1960s, and McDuff was among its most successful practitioners. Its initial popularity in both jazz and rock had peaked by the end of the decade, and it was later largely superseded for a time by more contemporary developments in keyboard technology, but it retained serious cult status among its devotees, and those musicians who still preferred the challenge of actually having to play everything themselves. The instrument has enjoyed an ongoing revival.

Jack McDuff was born Eugene McDuffy, and taught himself to play piano and organ, but later studied for a time at college in Cincinnati. He began playing professionally as a bass player with pianist Denny Zeitlin and reeds player Joe Farrell, then led his own group as a pianist in the Midwest in the early 1950s. He was active in Chicago in the late 1950s, where he played with Johnny Griffin and Max Roach, among others, and was in a group led by tenor saxophonist Willis ‘Gator’ Jackson in 1957-8.

Encouraged by Jackson, he began to concentrate on Hammond organ, and made his recording debut as leader with Brother Jack for Prestige in 1960, the first in a string of classic soul jazz releases for that label. Highlights of that association included “The Honeydripper,” (1961), in which he was joined by tenor saxophonist Jimmy Forrest and guitarist Grant Green (the latter was making his recording debut), and “Brother Jack Meets The Boss,” (1962), in which he was joined by the great Gene Ammons, and “Screamin,” (1962).

His dexterous, blues-rooted style and solid, grooving bass lines were heard to advantage on his recordings from the early 1960s, which also featured musicians like saxophonists Harold Vick and Red Holloway and guitarist Kenny Burrell. Most famously, McDuff also hired a young guitarist named George Benson, who added class and fire to several of McDuff’s albums, while the organist also set up Benson’s first recording as a leader, using the organist’s group for the date.

McDuff and his band, which he called The Heatin’ System, were established as a major force in the organ world. He signed to Atlantic Records in 1966, where he continued to record regularly, although without quite replicating the sparkle and group empathy of his Prestige albums.

McDuff recorded for Blue Note in the late 1960s, but the rise of soul and funk music had pushed soul jazz off the juke boxes by that time, while fusion took root in jazz itself. The 1970s and 1980s proved a leaner time for the music. McDuff experimented with the fashionable electric keyboards of the era, and dabbled in a jazz-funk fusion for a time, with forgettable results.

The revival of interest in the Hammond in the mid-1980s also provided the spark to relaunch McDuff’s career. His “comeback” album, “The Re-Entry,” recorded for the Muse label in 1988, began a successful run of recordings, initially for Muse, then for the Concord Jazz label from 1991 (George Benson, by now an international star, contributed to his old mentor’s “Colour Me Blue” album in 1992).

McDuff was always less reliant on raw power than many of his contemporaries, preferring a more soulful, thoughtful approach to the instrument’s manifold possibilities. His improvisations were deft and pleasingly lucid, and he made considerable use of the Hammond’s capacity for a wide ranging dynamic and textural variation, but never neglected the crucial groove in the process.

McDuff was also a notable arranger, composer and band leader, and recorded over 60 albums under his own name. Among the other eminent musicians who passed through his bands were saxophonist Joe Henderson and guitarist Pat Martino, and he collaborated with blues great Jimmy Witherspoon, saxophonist Sonny Stitt, and multi- instrumentalist Rahsaan Roland Kirk, among others.

The organist continued to tour with contemporary versions of The Heatin’ System, and released a “Brotherly Love,”(2001) as his final recording session, featuring Red Holloway and Pat Martino, whom were members of his popular '60s group. McDuff pulls out all the stops with phenomenal Hammond B-3 artistry. Joey DeFrancesco, appears on two tracks as a final tribute to his mentor, together they display their amazing techniques. This is a fitting farewell from one of the true monsters of “The Beast,” as the B-3 is referred to. 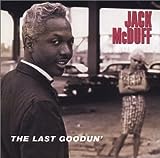 All About Jazz musician pages are maintained by musicians, publicists and trusted members like you. Interested? Tell us why you would like to improve the Jack McDuff musician page.