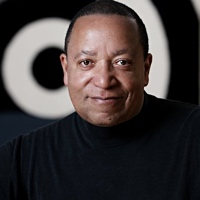 Vel Lewis can be found listed on many popular recordings and well-known TV shows The Sopranos, Mad About You, Friends, and Wife Swap USA, all of which feature music he composed.

His latest release, “Colors of Soul” is a highly charged Jazz and Soul EP that is superbly produced by Vel, combined with the Midas touch of chart-topping producer Greg Manning who added his brand of magic to the mixes. Kevin Chokan on guitars, keeping it in the pocket and soulful. Master percussionist Lenny Castro brings his signature sound to the project. “Colors of Soul” is a mixture of rhythmic songs for the Groove Jazz listener. His 2014 single, “Song For My Love” from his latest EP “Colors Of Soul”, is the follow up from his 2013 Smooth Jazz Adult Contemporary single “Maybe So”, which continues to chart and solidified his position as a professional jazz/soul/funk musician. “Song For My Love” ended up the year 2014 with a position on the Groove Jazz Music.com “Top 100” chart with over 1,600 spins and 375,000 streams. “Song For My Love” and his Holiday rendition of the familiar Christmas carol “God Rest Ye Merry Gentlemen” both landed spots on the 58th Annual Grammy Awards ballot for consideration. His latest single, Houston Strong” which he dedicated to all the survivors of Hurricane Harvey, was approved to be on the 61st Annual Grammy Awards ballot for consideration. Vel also appeared on the KHOU-TV Channel 11 “Great Day Houston” TV show twice in August 2018, and again as the show's week-long “house band” artist in March 2019.

Vel received his second ASCAP Plus Award in November 2014; the first one awarded in 2013 after the release of his singles, “Vitamin D” and “Maybe So”. His jazz/soul/funk track entitled “Vitamin D” released in 2012 continues to be streamed daily while receiving numerous fan “likes” on Jango Radio and other social media sites.

Vel is an accomplished singer, producer, arranger, and Hammond organist, who composes his own music and also plays piano and drums. He has performed on the same stage with Funkadelic/Parliament, Al Green, The Spinners, The O'Jays, Earth, Wind, And Fire, and many other well-known stars at the Apollo Theater (NYC), Baltimore Civic Center (MD), the Hampton Coliseum (VA), and the Kennedy Center (D.C.), before capacity crowds.

Vel co-wrote The Delfonics’ hit song, “I Told You So” with lead singer William Hart, and co-wrote and sang lead vocal on The Life Group’s successful single, “Tell Me Why”. Vel continued performing around the world as a member of The Life Group sharing the stage with Phyllis Hyman, Stevie Wonder, Mandrill and numerous other guest stars.

In 2002, Dionne Warwick contacted Vel to perform on her World Tour, which he did for three years before the release of his solo debut CD/DVD project, “Shady Grady – All Wound Up”. During this tour, Vel performed on the stages of the Sydney Opera House (Australia), National Auditorium (Mexico), Suntec Center (Singapore), Hong Kong Convention Center and before dignitaries (the King and Queen of Norway), and notables Mr. Steve Forbes, Mr. Franco Harris of the Pittsburgh Steelers, Andrea Bocelli, and many other well-known celebrities. All of Vel's live performances to date have been to sold out audiences.

The Jazz In M.E.E. Magazine published a two-page feature article on Vel in their Oct 2015 issue, which is circulating across 180,000 subscribers, and jazz festivals and events worldwide.

Vel continues to deliver the kind of sultry, groove-laced music that catches the ears of his audience and soothes their hearts. From the moment the first note is heard and you feel the pulse of the rhythm, the ride begins – this is the perfect combination for the true music lover. For those around the world who have been requesting more Vel Lewis Music, this is for you… “Colors Of Soul” … ear candy for the heart!

“So different and funky and refreshing. I'll be sure to play this song in days to come. It's special! Not a lot of artists tackle “God Rest Ye Merry Gentlemen.” A favorite of mine - and to hear it done like this is a gift.” - Trish Hennessey, Hybrid Jazz From Trish Hennessey

“LOVE IT!!!!! Thank you!!! You just made my day…” - Annie Latin Jazzy Rodriguez of “Up Close & Personal with Latin Jazzy”

“God Rest Ye Merry Gentlemen . . . guaranteed to be a classic and something you'll want to hear each holiday season.” – Guy Michaels of “The J-Spot” TV show and KPVU 91.3 FM Morning Show, Houston

“So different and funky and refreshing. I'll be sure to play this song in days to come. It's special! Not a lot of artists tackle “God Rest Ye Merry Gentlemen.” A favorite of mine - and to hear it done like this is a gift.” - Trish Hennessey, Hybrid Jazz From Trish Hennessey

“LOVE IT!!!!! Thank you!!! You just made my day…” - Annie Latin Jazzy Rodriguez of “Up Close & Personal with Latin Jazzy”

“God Rest Ye Merry Gentlemen . . . guaranteed to be a classic and something you'll want to hear each holiday season.” – Guy Michaels of “The J-Spot” TV show and KPVU 91.3 FM Morning Show, Houston

“Song For My Love...A cool retro Hammond B3 sound with a great melody and groove - familiar yet new!” - Ted Hasiuk, Jazzlynx

“Happy to add the single (”Colors Of Soul”) to our network library and our Jazz stream.” - John Corcelli, Canadian Broadcasting Company

“Colors Of Soul is an excellent follow up to Velbert Lewis' Song For My Love. Colors Of Soul has an appealing rhythmic feel to the melody which seems to just glide along freely over the top. I have played the song many times on my two programs and when adding it to my playlist feel it adds to listener's enjoyment of the smooth format of the program. I look forward to hearing more from Velbert Lewis and wish him well.” - John Holden, 2BACR FM 100.9, Sydney, Australia.

“I have been using “Colors of Soul” on my program for two months, love it and will keep using it , send me more tunes Vel” - Bill Sharpe, Coast 101.1fm classic hits

“It's difficult to find quality music amongst so many offerings. But this stuff stands out as superior (along with other tracks 'All Wound Up', 'Song for My Love' and 'Maybe So').” - Larry Vidal, 91.8 Hayes FM.org.uk 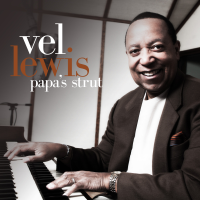 From: Papa's Strut
By Vel Lewis 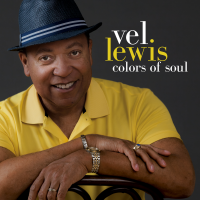 From: Colors Of Soul - single
By Vel Lewis

All About Jazz musician pages are maintained by musicians, publicists and trusted members like you. Interested? Tell us why you would like to improve the Vel Lewis musician page.