Born in Munich, Germany, in 1964, Barbara Dennerlein fell in love with the Hammond organ sound at an early age. She was eleven when the first home organ was given to her for Christmas. After only one and a half years of lessons she decided to continue autodidactic, relying upon her highly visible talent. She began to develop her own inimitable style and finally her jazz enthusiastic parents decided to buy an original Hammond B3.

Barbara became acquainted with the history of the instrument and went on her own journey of discovery in the world of music. In addition to studying the classical repertoire of standards, she also began to compose her own numbers very early on. Following first performances as a thirteen-year-old, she began to play in clubs at the age of fifteen. In the early eighties she was already fêted as the “organ tornado from Munich”.

After her first TV appearances in 1982 Barbara began to record for LP's and included own compositions right from the beginning. Her third LP “Bebab” (a compound of 'bebop' and 'Barbara') was released by her likewise named own record label which she established at age 20. Having received the German jazz critics award for it, her popularity increased tremendously in Europe and finally grew into a world wide reputation. “Harper's Bazaar” wondered: “How did this Fräulein get so funky?“ and the Los Angeles Times headlined with: ”German Organist Pumps You Out”.

Since MIDI technology came up Barbara adds synthesizers and samplers to her sound. She replaced the rather weak Hammond pedal sound by an original double bass sample that allows her to play an accentuated bass line with one foot, chords with the left hand and melody with the right.

Being a band leader from the very beginning, and often the youngest among elder, Barbara is a perfectionist, though anything but a soulless technician. She attaches the greatest importance to musical integration in the collective. Her live bands play superbly well together. Her CD productions for e.g. “ENJA” or “Verve” feature hand- picked line-ups of prominent musicians versed in different styles, such as Ray Anderson, Antonio Hart, Mitch Watkins, Randy Brecker, Jeff “Tain” Watts, David Murray, Howard Johnson, Frank Lacy, David Sanchez, Roy Hargrove, Bob Berg and Dennis Chambers.

From time to time, Barbara allows herself sufficient time to give musical expression to her innermost thoughts and aspirations and to capture these on strikingly original and very personal solo CD's. ”Solo” (1993) and “In a Silent Mood” (2004) provide a revealing insight into her musical personality, as she energetically celebrates the free flow of musical ideas which mirror her remarkable career as a brilliant exponent of the organ.

Besides her “Bebab Band” and solo work, Barbara Dennerlein has also collaborated with big bands like Peter Herbolzheimer's Rythm combination & brass and with the unforgettable pianist Friedrich Gulda, who used his full musical genius to create a symbiosis of classical music and jazz beyond all limitations of style or genre.

Barbara Dennerlein takes the same approach to music in her work as she says: “To me, jazz is a synonym for freedom. Freedom from prejudice and discrimination, freedom from constraints and convention. This is my own definition of jazz that I want to convey to the listener. Whether young or old, traditionalist or modernist, jazz fan or non-jazz fan.“

Thus, she continuously explores new terrain. Her first invitation to play a church organ concert in 1994 stimulated an intensive period of activity with the “queen of instruments”, the church organ. Thanks to her complete mastery of the pedals, Barbara managed to fully exploit the immense musical potential, sometimes with works that she composed especially for the pipe organ, and make the somewhat sluggish instrument swing. In many concerts since then the audience has been carried off to new worlds of sound, a mixture of jazz in the widest sense and classical elements. In 2002 Barbara recorded for the first time exclusively on the pipe organ (”Spiritual Movement No.1”).

In 2003 Barbara started a true outstanding project in regard of a jazz trio and a philharmonic orchestra playing together. She derived the project from the fact that she, to put it into her own words, ”has approached the cosmos of classical music by playing on the church organ”. Barbara Dennerlein performed her complex compositions on the church organ but she aimed to realize them by a much bigger musical body, which ensures the full richness of colours and dynamics. To let a symphonic orchestra swing is even more difficult than to achieve this on the pipe organ. A real task for Barbara, who likes to bear challenges.

Videos: Barbara Dennerlein in the 1980s 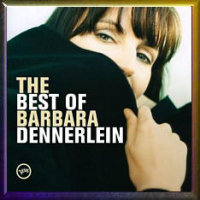 The Best of Barbara...

From: Love Letters
By Barbara Dennerlein

All About Jazz musician pages are maintained by musicians, publicists and trusted members like you. Interested? Tell us why you would like to improve the Big John Patton musician page.