Escape To The Alluring Sounds Of Vintage Exotica On "Technicolor Paradise: Rhum Rhapsodies & Other Exotic Delights" On May 25

The award-winning Numero Group serves up a space-age sonic cocktail of conga drums, bird calls and wild animals on this new collection, where Our Gang’s Darla Hood and jazz great Jimmy McGriff spend time with The Potted Palm and Bailey’s Nervous Kats. 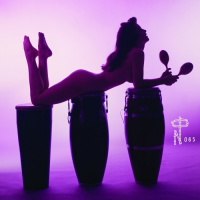 slideshow
In the late ’50s to the mid-’60s, somewhere between Elvis’ last Ed Sullivan Show appearance and the Beatles’ U.S. invasion, a strange musical movement surfaced in America seemingly from some fantasy island in the South Pacific. Known as Exotica, the music blended together wildly disparate musical styles—easy listening and lounge; jazz and surf—to concoct a fizzy colorful sound that felt both marvelously mysterious and delightfully fun. While originally a rather short-lived phenomenon, Exotica (and its stars, such as Martin Denny, Arthur Lyman, Esquivel, Yma Sumac, and Les Baxter), has never disappeared from the cultural radar.

Noted archival experts the Numero Group have dug beneath the surface of the Exotica scene in compiling Technicolor Paradise: Rhum Rhapsodies & Other Exotic Delights. The collection—54 songs on CD and 48 on 3 LPs, due out May 25, 2018—is divided into three groupings: Daiquiri Dirges, Rhum Rhapsodies, and Mai Tai Mambos. Daiquiri Dirges focuses on guitar instrumentals, Rhum Rhapsodies spotlights vocal numbers, while Mai Tai Mambos features more dance-oriented tracks. The set is comes packed with obscurities and curios. Many are rarities, highly sought after by collectors, that were released on tiny, regional labels with names like Brass, Camelia, and Jax. Although its performers aren’t familiar names, Technicolor Paradise tells the story of Exotica as well as would an anthology featuring the celebrated stars.

Technicolor Paradise, in fact, contains many of Exotica’s most famous tunes, only in “alternative versions” performed by lesser-known acts. Instead of Lyman’s lush rendition of “The Moon of Manakoora,” you’ll hear a guitar-centric take by Lenny & the Thundertones. Nat King Cole’s smooth “Nature Boy” has been re-imagined by Don Reed with the otherworldly, Sumacian singing of a woman billed as “The Voice of Love.” The Exotica classic “Quiet Village,” popularized by both Baxter and Denny, shows up twice—once as a vibe-flavored version by the Five Glow Tones and the other, entitled “My Quiet Island,” a sultry rendition sung by Darla Hood.

Yes, that Darla Hood, the one who was the darling of the old Our Gang series. By the late ’50s, Hood had turned her attention to music, and “My Quiet Island,” along with her other Technicolor Paradise contribution, “Silent Island,” reveal her to be a surprisingly strong vocalist (and surprising too she wasn’t even 30 years old yet). Another actress represented here is Martha Raye. Known for her comedy roles (and Polident TV commercials), Raye delivers an alluring, scat-like singing performance on “Lotus Land,” a 1950 track that pre-dates Exotica but fits right into with Technicolor Paradise’s songs.

The most prominent musician on Technicolor Paradise would probably be Jimmy McGriff. The late, great soul-jazz organist enjoyed a long career that stretched from the 1960s into the early 2000. Here, he serves up a deeply funky groove on “Jungle Cat,” a double-sided single for the mid-’60s. Several other tracks do feature performers with careers of note too. The Baha'i Victory Chorus ("Nightingale of Paradise") was led by Russ Garcia, a composer/arranger who worked with legends like Henry Mancini, Louis Armstrong and Ella Fitzgerald. Bobby Christian (“Caravan”) played drums in the Paul Whiteman Band and Arturo Toscanini's NBC Symphony of the Air, and is a member of the Percussion Arts Society's Hall of Fame. The Akim behind the wild “Voodoo Drums” is actually Aki Aleong, who later found more success acting, with prominent roles in series like Babylon 5 and V: The Series.

Also, some bands may not be the ones who might think they are. The Castiles, who perform one of the two versions of “Enchantment” on this collection, should not be mistaken for Springsteen’s early group. The Wailers (“Driftwood”) is not the famous reggae band, but the early garage rock band from the Pacific Northwest. The Blazers (“Sound of Mecca”), meanwhile, isn’t the ’60s Georgia-based garage band nor the Tex-Mex band of the same name, but a short-lived instrumental outfit from Southern California.

Although the music on Technicolor Paradise may sound like it emanates from a South Pacific island or an African jungle, the bands typically came from non-exotic American towns. The Crew (“The Jaguar Hunt”) hailed from Kansas City and The Blue Jeans (“Atlantis”) from Spokane. Denver was the base of The Shelltones (“Blue Castaway”) while Minnesota was home for The Palatons (“Jungle Guitar”). Bailey’s Nervous Kats (“Cobra”) came from Redding in Northern California; however, The Potted Palm (“My House of Grass”) actually did come from a tropical locale (Hawaii), although it was started by a Detroit expatriate.

It’s not surprising that there was a fabulist quality to these acts, creating an image and a sound that weren’t native to them, because the term Exotica itself was coined for marketing purposes. Liberty Records co-founder Si Waronker dreamed up the word as a way to publicize new label signee Martin Denny. Exotica was used as the title of Denny’s debut album, and to promote a music and life style. No matter its marketing-born origins, Exotica did strike a chord with listeners. There was no voodoo involved. Featuring a pu-pu platter of colorful musical styles, Exotica simply offers an enchanting escapism of a sonic Shangri-La that still holds an enticing pull today.