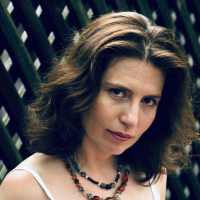 What quickly becomes apparent is the depth, style, and articulation of her musical ideas which have influences from Wayne Shorter to Stravinsky.
—Mark F. Turner, All About Jaz

”Intelligent” and “Inventive” and “Free-swinging” are some of the words that critics have used to describe pianist and composer Sila Cevikce Shaman's music. Born in Ankara, Turkey, she moved to USA in 1993 to study composition and jazz improvisation where her mentors included Jerry Bergonzi, Joanne Brackeen, Robert Helps and Chuck Owen. For the next decade she has written for, performed and recorded with many ensembles including Kim Bock Quartet, Spindle, Greenwich Blue, Dan McMillion Groovin’ High Big Band, Robin Hackett, SDS Trio, poet laureate Lawson Inada as well as her own quartet featuring Rich Perry and Ari Hoenig. In 2004, her debut album as a bandleader, A New Abode was released on SteepleChase Records. Selected as an Album of the Week pick by NPR's Jazz with Bob Parlocha, this recording has had extensive airplay in the US and Europe. She followed this with several releases from Louie Records and her own WaveEleven label including First Encounters (2009), At the End of the Day (2018) and First Time Again(2019) and They Come Out at Night (2021). Her latest duo album in collaboration with multi-instrumentalist Dave Storrs, Brief West Coast Tour was featured on the best releases of 2020 by Dan McClenaghan of All About Jazz.

For the last decade and a half, due to her interest in collaborative and visual applications of music, she has been composing and recording music for film, theater and multimedia. Her credits include scores for Catskill Chainsaw Redemption, a short film by Emmy winning writer J.R. Havlan of “The Daily Show with John Stewart”; documentary First American Art; documentary 9/11-Ten Years On for History Channel; Being a New Yorker Cartoonist, short film by cartoonist Liana Finck presented by the Daily Forward; music for the play Terrotica, by Brad Krumholz, staged by NACL, the musical satire Spin with book and lyrics by former chairman of the NEA John Frohnmayer, starring David Ogden Stiers, Venezuela for RASTRO Dance Company and the score for Brindlebeast(Hear Me) a new musical in voice, song and American Sign Language with book and lyrics by Anita Riggio.

Her latest projects include the original scores to feature documentary Sisters in Freedom for which she received two 2019 Mid-Atlantic Emmy Awards; the TV pilot Perception by creator/director PJ Posner and virtual performance film Transmission in collaboration with Jeffrey Shaman commissioned by Corvallis-OSU Piano International. She currently lives and works in NYC.

Read more articles
"She has the ability as a writer and soloist to connect the dots; many and many a dot it turns out" CADENCE Magazine

"What quickly becomes apparent is the depth, style, and articulation of her musical ideas which have influences from Wayne Shorter to Stravinsky." Mark F. Turner/ All About Jazz

All About Jazz musician pages are maintained by musicians, publicists and trusted members like you. Interested? Tell us why you would like to improve the Sila Shaman musician page.