Herbie Hancock is a true icon of modern music. Throughout his explorations, he has transcended limitations and genres while still maintaining his unique, unmistakable voice. Herbie's success at expanding the possibilities of musical thought has placed him in the annals of this century's visionaries. With an illustrious career spanning five decades, he continues to amaze audiences and never ceases to expand the public's vision of what music, particularly jazz, is all about today.

Herbie Hancock's creative path has moved fluidly between almost every development in acoustic and electronic jazz and R&B since 1960. He has attained an enviable balance of commercial and artistic success, arriving at a point in his career where he ventures into every new project motivated purely by the desire to expand the boundaries of his creativity.

There are few artists in the music industry who have gained more respect and cast more influence than Herbie Hancock. As the immortal Miles Davis said in his autobiography, "Herbie was the step after Bud Powell and Thelonious Monk, and I haven't heard anybody yet who has come after him."

Born in Chicago in 1940, Herbie was a child piano prodigy who performed a Mozart piano concerto with the Chicago Symphony Orchestra at the tender age of 11. He began playing jazz in high school, initially influenced by Oscar Peterson and Bill Evans. Also at this time, an additional passion for electronic science began to develop. As a result, he took a double major in music and electrical engineering at Grinnell College.

In 1960, at age 20, Herbie was discovered by trumpeter Donald Byrd, who asked him to join his group. Byrd also introduced Herbie to Alfred Lion of Blue Note Records, and after two years of session work with the likes of Phil Woods and Oliver Nelson, he signed to the legendary label as a solo artist. His 1963 debut album, Takin’ Off, was an immediate success, producing “Watermelon Man,” a big hit on jazz and R&B radio. Also in 1963, Herbie received the call that was to change his life and secure his place in jazz history. Miles Davis invited Herbie to join the Miles Davis Quintet. During his five years with Davis, Herbie and his colleagues thrilled audiences and recorded classic after classic, including the albums ESP, Nefertiti, and Sorcerer. Most jazz critics and fans regard this group, which also included Wayne Shorter (tenor sax), Ron Carter (bass), and Tony Williams (drums), as the greatest small jazz group of the 1960s. Even after he left Davis' group, Herbie still made appearances on Davis' groundbreaking recordings In a Silent Way and Bitches Brew, which heralded the birth of jazz-fusion.

Simultaneous with his work for Miles, Herbie's own solo career blossomed on Blue Note, creating such classic albums as Maiden Voyage, Empyrean Isles, and Speak Like a Child. In 1966, he composed the score to Michelangelo Antonioni's film, Blow Up. This led to a successful career in feature film and television music, including music for Bill Cosby’s Emmy-winning Hey, Hey, Hey, It’s Fat Albert and many other film scores in following years.

1970s: The Headhunters and VSOP

After leaving Miles Davis in 1968, Herbie stepped full-time into the new electronic jazz-funk that was sweeping the world. Herbie gathered a new band called The Headhunters and, in 1973, recorded Head Hunters—a hugely successful crossover hit which became the first jazz album to go platinum. With its Sly Stone-influenced hit single "Chameleon," this album (and its follow-up, Thrust) signaled once and for all that Herbie Hancock would not be pigeonholed or categorized.

By mid-decade, Herbie was playing for stadium-sized crowds all over the world and had no fewer than four albums in the pop charts at once. In total, Herbie had eleven albums in the pop charts during the 1970s. What's even more remarkable about Herbie's ’70s output is the inspiration and inexhaustible supply of samples he provided for the generations of hip hop and dance music artists that followed almost twenty years after these recordings were at their peak popularity. This, though, would not be the only time in his career that Herbie’s work would have such an influence.

Not content to travel one creative path, Herbie also stayed close to his love of acoustic jazz in the ’70s. He recorded and performed with VSOP (a reunification of the ’60s Miles Davis Quintet, substituting the great Freddie Hubbard for Davis), with various trios and quartets under his own name, and in duet settings with fellow pianists Chick Corea and Oscar Peterson.

In 1980, Herbie introduced the trumpeter Wynton Marsalis to the world as a solo artist, producing the young musician's debut album and touring with him as well. In 1983, a new pull to the alternative side led Herbie to a series of collaborations with the notorious musical architect Bill Laswell. The first, Future Shock, again struck platinum, and the single "Rockit" rocked the dance and R&B charts, winning a Grammy for Best R&B Instrumental. Moreover, the video of the track, created by Kevin Godley and Lol Crème, won five MTV awards. Sound System, the follow-up to Future Shock, also received a Grammy in the R&B instrumental category. Once again, Herbie Hancock had blazed a new path for younger musicians to follow.

In addition to his Grammy and MTV Award successes, Herbie won an Oscar in 1986 for scoring the film 'Round Midnight—in which he also appeared as an actor. During this time, he composed the soundtracks for a number of other films including Colors, Jo Jo Dancer, Action Jackson and Harlem Nights. Numerous television appearances over the years led to two hosting assignments in the 1980s. The first, Rock School, was an innovative educational music show for PBS, the second, Showtime's Coast To Coast, was a unique series of in-concert performances, interviews and collaborations, and ran from 1989-91.

Herbie once again scaled the charts in 1994, but in a most unique way. A British hip-hop group called US3 sampled a classic Blue Note side, "Cantaloupe Island," for a track called "Cantaloop" which became a huge international hit for Herbie's old label. The track went Top 20 in a number of countries and was licensed countless times for TV commercials and promos, leading to the resurrection of many great Herbie Hancock tracks throughout the decade.

Herbie signed to the Polygram Label Group in 1994. After an adventurous pop-oriented project for Mercury Records, Dis Is Da Drum, he moved on to Polygram's Verve label, forming an all-star band to record 1996's Grammy- winning The New Standard. This album, another landmark, adapted rock and R&B tunes from recent times to a straight ahead jazz format. In 1997, an eloquent and daring album of duets with Wayne Shorter, 1+1, was released. The legendary Headhunters reunited in 1998, recording an album for Herbie's own Verve-distributed imprint, and touring with the Dave Matthews Band at the arena-rock giant's own request. But the crowning achievement of Herbie Hancock's Verve years thus far has been Gershwin's World. Recorded and released in 1998, this masterwork brought artists from all over the musical spectrum together in a celebration of George Gershwin and his entire artistic milieu. Herbie's collaborators included Joni Mitchell, Stevie Wonder, Kathleen Battle, the Orpheus Chamber Orchestra, Wayne Shorter and Chick Corea. Gershwin's World won three Grammies in 1999, including Best Traditional Jazz Album and Best R&B Vocal Performance for Stevie Wonder's "St. Louis Blues." The entire music world celebrated this album as one of the very finest in Herbie Hancock's incomparable career.

At the end of 1999, Herbie joined two partners—his manager David Passick and former Verve Records president Chuck Mitchell—to form Transparent Music, a multi-media music company dedicated to the presentation of barrier-breaking music of all types, at all tiers of distribution including recordings, films and TV, concert events and the Internet.

2000 and Today: FUTURE2FUTURE and Possibilities

In yet another innovative stylistic move, Herbie reunited with Bill Laswell in the creation of a 21st Century collaboration with some of the young hip-hop and techno artists who have drawn on his massive influence to create their own music of the future. The album was released in spring, 2001, and is entitled FUTURE2FUTURE. Another collaborative work followed in 2002 when Herbie teamed with Roy Hargrove and Michael Becker to record a live concert album, Directions In Music: Live at Massey Hall—a tribute to John Coltrane and Miles Davis. The three musicians then embarked upon a tour.

His latest studio project, Possibilities, released in August 2005 is aptly named, as it consists of an even wider-ranging collection of sounds and styles than his previous collaborative works. For Possibilities, Herbie teamed with established artists such as Sting, Annie Lennox, John Mayer, Christina Aguilera, Paul Simon and Carlos Santana, as well as serious up-and-comers like Joss Stone and Damien Rice. Also in 2005, Herbie re-staffed his famed Headhunters ensemble with a host of notable names such as guitarists John Mayer and Lionel Loueke, bassist Marcus Miller, drummer Terri Lyne Carrington, trumpeter Roy Hargrove and percussionist Munyungo Jackson to play a number of concert dates in the summer.

Herbie Hancock also maintains a thriving career outside the performing stage and recording studio. Since 1991, he has been the Distinguished Artist in Residence at Jazz Aspen Snowmass in Colorado; a non-profit organization devoted to the preservation and performance of jazz and American music. Herbie also serves as Institute Chairman of the Thelonious Monk Institute of Jazz, the foremost international organization devoted to the development of jazz performance and education worldwide. He has taken on a number of roles on behalf of the institute, from competition judge to master class teacher, to guest performer with the Institute's prestigious college program.

Now in the fifth decade of his professional life, Herbie Hancock remains where he has always been: in the forefront of world culture, technology, business and music. Though one can't track exactly where he will go next, he is sure to leave his own inimitable creative style and imprint wherever he lands. Show less 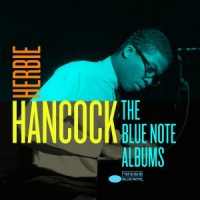 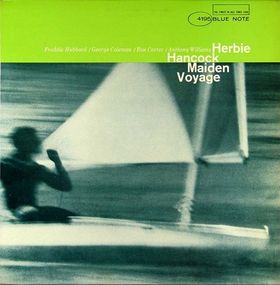 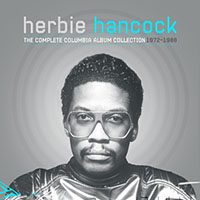 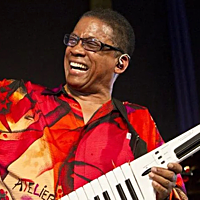 All About Jazz musician pages are maintained by musicians, publicists and trusted members like you. Interested? Tell us why you would like to improve the Herbie Hancock musician page.