Adam Hersh is a jazz pianist and composer based out of Los Angeles, California. Recently graduated from Cal State University Northridge, he performs with the funk band “Groove Sauce”, various original music groups under his own name, and many other performing ensembles as a sideman. He competed in the Angel City Jazz Competition in 2013 with the “Interstellar Quintet” winning the chance to perform at LACMA for the Angel City Jazz Festival, and having the performance broadcasted on KJAZZ 88.1. As a member of the “Golan Culture” in 2014, he toured internationally, competing in the “Keep an Eye on Jazz” competition in Amsterdam and recorded a CD of original compositions and arrangements by fellow student and virtuosic young sax player Shai Golan. In the summer of 2016, he toured England with the CSUN Jazz “A” Band, performing in many different venues culminating with a performance at the Hollywood Bowl for the “Playboy Jazz Festival” upon return to the United States. In his last semester at CSUN he competed in the Monterey Next Generation Jazz festival and placed 3rd in the combo division and 2nd in the Big Band. In the summer of 2017 he had the opportunity of being selected as a Ravinia composition fellow. This allowed him to participate in a week long workshop in Highland Park, Illinois where he worked directly with Billy Childs, Rufus, Reid, Nathan Davis, and a group of talented young composers and performers. In October 2017, Adam toured in Holland with the LAHO group featuring alto saxophonist and composer Ben Van Gelder. 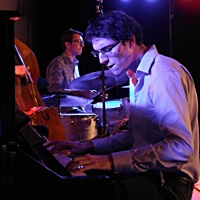 All About Jazz musician pages are maintained by musicians, publicists and trusted members like you. Interested? Tell us why you would like to improve the Adam Hersh musician page.