The vibrant and joyful music of Luiz Santos, a worldwide artist from New York City USA, will make you feel alive. His brilliant mix of Brazilian percussion, Caribbean, Chamber Music and Jazz as he plays the drums and the piano will fill your heart with hope. Simply put on one of his albums and you'll be sure to feel uplifted and encouraged. What makes the music of this world-class Brazilian drummer, percussionist, pianist and composer so unique and incredibly special? His unparalleled creativity in making music and has been doing so since his childhood.

His love of music stems from the passion for music his Brazilian parents had while growing up. They knew that as a young child of nine years old when they first heard Luiz play the drums, he had talent beyond his years. The more he played, the more he aspired to play many different rhythms.

The self-taught instrumentalist played his first professional gig at the age of 13 while living in Rio de Janeiro. Opportunities arose to play with older musicians which helped him to explore many different styles of music.

Eventually he began performing all over Brazil with well-known recording musicians such as bassist Arthur Maia, Jovino Santos, Hermeto Pascoal and many others. The passion Luiz had for music fueled him to begin composing and arranging full orchestral pieces.

He also toured extensively in Europe as part of “Brazil Fusion”. His music became in high demand, enabling him to play for bands and work on music projects in several countries including Germany, France, Norway, Sweden, Holland, Belgium, Greece, Luxemburg and Italy.

Life is filled with many sounds and as an accomplished and talented musician, Luiz Santos captures the sounds of life like no other. If you desire to hear music in a whole new way that brings refreshing to your soul and excitement to your everyday life, you will want to have the albums of Luiz Santos. Show less 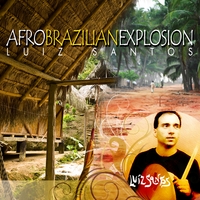 All About Jazz musician pages are maintained by musicians, publicists and trusted members like you. Interested? Tell us why you would like to improve the Luiz Santos musician page.