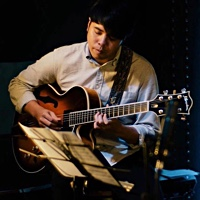 The beginning of his musical career was from the old cassette-tape days when his father introduced him to a rock album in secondary school. As young as he was, the sound of the electric guitar was nothing like he had ever heard before. The more he listened to it the more he was determined that this was going to be his instrument.

He aspired to become a guitarist, formed a rock band in secondary school, and that later led him onto a major turning point in his life – to join the prestigious pre-college music program at College of Music, Mahidol University. Consequently, Chirdkiatisak graduated with a Bachelor of music in Jazz Performance at College of Music, Mahidol University in 2014, and then became a guest instructor in Jazz department at the same university until 2017.

In 2018, he applied in Aaron Copland School of Music at Queens Colleges to continue his study in Master Degree in Jazz Studies and he had studied with Paul Bollenback and Mike Moreno.

In 2018, he had released his first album called Dreamer.

All About Jazz musician pages are maintained by musicians, publicists and trusted members like you. Interested? Tell us why you would like to improve the Pamai Chirdkiatisak musician page.