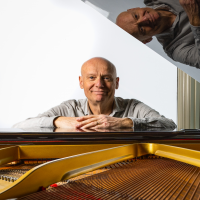 Tim Bruer is a Sydney based pianist and composer. He performs regularly around the Sydney area, playing solo piano, and with various bands. He also teaches piano and a number of other subjects at The Australian Institute of Music.

Over a career spanning more than 40 years, Tim has performed with many of Australia’s finest musicians including James Morrison, Dale Barlow Jackie Orzarsky, Carl Orr, Steve Hunter, and Elana Stone. He holds both a Bachelor of Music and a Masters of Music degree in jazz performance, and has studied extensively with Mike Nock. Tim has also been featured on a number of recordings by artists such as The Acca Daiquiris, Guy LeClaire, Max Sharam and Hammerhead, and 2007 saw the release of his first CD under his own name. “The Tim Bruer Quartet” finds him collaborating with some of his favourite players, and reflects his many years of playing jazz, funk and r&b

Activities from 2007 till present – Regular performances in the Sydney area including leading his own groups at both the Seymour Centre and Foundry 616; released solo piano album "Love Letters, Compositions for solo piano" November 2022.

“Another gem from the Covidian era of isolation. Love Letters is a set of sublimely composed, highly personal solo pieces from the consummate Sydney pianist Tim Bruer played with passion, charm and without pretense.”  Peter Wockner

"A must hear for lovers of modern piano music"  Mike Nock

All About Jazz musician pages are maintained by musicians, publicists and trusted members like you. Interested? Tell us why you would like to improve the Tim Bruer musician page.