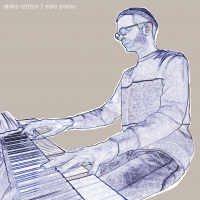 Yotam Ishay is an Israeli pianist & composer who performs both Jazz and modern music, a recent graduate of Berklee College of Music with a full scholarship. Yotam grew up in Afula, a small town in Israel. His first experience with music was at the age of 9 when he heard his older sisters playing "Heart & Soul" on the piano. Being already passionate about music, and since he couldn't read music yet, he asked them to write the names of the notes played in Hebrew so he could learn the song. Yotam began formal classical piano lessons just before his tenth birthday, while experimenting with composition from the first years, and listening to CDs of the music of Claude Debussy, who became his deepest influence through the years

Aleks Izotov is a pianist and composer based in the DC metro area. A native of Phoenix, Arizona, Aleks graduated with a bachelor’s degree in Jazz Performance from Arizona State University, where he studied with pianist Michael Kocour. While in college, Aleks was awarded the Most Outstanding Rhythm Section Player at the Reno Jazz Festival and was privileged to attend Ravinia's Steans Institute. Since moving to DC in 2016, Aleks has been steadily growing his reputation as a sideman, appearing with Tarus Mateen, Michael Bowie, Marshall Keys, and Mike Cemprola. His first solo release, solo piano, was released in February 2021.

For over thirty years Keith Tippett has been at the forefront of contemporary European jazz and new music. In the late 1960s, Tippett led a sextet featuring Elton Dean on saxophone, Mark Charig on trumpet and Nick Evans on trombone. Tippett married singer Julie Driscoll and wrote scores for TV. In the early 1970s, his big band Centipede brought together much of a generation of young British jazz and rock musicians. As well as performing some concerts (limited economically by the size of the band), they recorded one double-album, Septober Energy. He formed, with Harry Miller and Louis Moholo a formidable rhythm section at the centre of some of the most exciting combinations in the country, including the Elton Dean quartet, and Elton Dean's Ninesense

This album is the tenth released by the Elsewhere label since its launch in the spring of 2018. It is the third of those ten to feature the French composer and pianist Melaine Dalibert. Whereas on the previous two albums, Dalibert played his own compositions, here he performs piano compositions by the Greek composer Anastassis Philippakopoulos ...

In a very small New England church, the organist ends her final hymn. The clamor of the socializing begins as families and seniors begin making their way to relatives, friends, and warm, familiar conversation. As the peacefulness of the day almost subsides completely, an anxious spark within two very small brothers sends them straight away to the church's spinet piano where the friendly noises all around provide them with more than adequate "cover" for their somewhat theatrical re-creations of Mrs. Butler's powerful, gospel-influenced stylings. Most of the people didn't complain too much, but boy, did we have a great time! Years later, I would add on to my treasured early "experience," studying both technique and performance with Professor Emeritus Henry Santos, a renowned concert pianist, music scholar, and historian

David Ecker is a jazz pianist, composer, and producer based in Brooklyn, NY. His EP, "The Visitor Suite" was released in 2018, and he is currently gearing up for the release of his debut LP.

Awarded Arts Council England support for the 2017 ‘Stations of the Cross’ Solo Piano Tour and nominated in 2014 for a Paul Hamlyn Award for Artists, Simon Vincent is a performer and composer of acoustic and electronic music, who has been challenging the boundaries of genre and musical expression with a highly personal language since the early 1990’s. “Visionary and expressive”, “rich and surprising”, “incredibly individual”, “masterful compositions”, “an immersive experience”, Simon’s music has attracted praise and radio play from critics as varied as Fran Wilson, Lauren Redhead, Ben Watson, Julian Cowley, Nick Luscombe, Robert Hugill, Massimo Ricci, Gilles Peterson, Mr