Musician and composer, Jamie Bullock, grew up surrounded by a musical family and has been playing the piano since the age of 7. He was classically trained for a brief period and soon moved to playing commercial jazz standards alongside his father. At age 16, Jamie taught himself the acoustic and electric guitar and delved into the world of rock and pop. While studying music at Virginia Tech University, he was accepted into the Virginia Tech Jazz Orchestra as lead pianist. Jamie studied jazz improvisation, technique, and scoring. During this period, he was fortunate to receive professional training under mentor, Chip McNeil, jazz director, Grammy Winner, 1st tenor sax, and lead arranger for Arturo Sandoval and Maynard Ferguson. In 2001, Jamie formed rock band, “Jivestone” in Northern Virginia and resided as keyboardist, singer, and songwriter, recording two albums and playing various clubs in the Tri-State area. Relocating to Southern California, Jamie has been consistently busy, collaborating with many artists and providing additional music and arrangements on numerous recordings. In 2005 he joined recording artists, “International Farmers”, playing keyboards, and led the band to win Reggae Artist of the Year at the Los Angeles Music Awards, the South Bay Music Awards, and the Hollywood Music in Media Awards. ​ He has also acted in, co-wrote, and produced TV pilots, “Road to Rhythm” and “Transplants”, nominated in the New York Television Film Festival

. He has been featured in recordings for various artists as a session musician and has has co-written and produced 6 albums. Relocating to London, UK in 2019, Jamie still currently plays keyboards for Los Angeles funk rock band, “Zen Robbi”, children's band/super group, “Jelly Of The Month Club”, and UK Based early Jamaican ska, reggae and roots band, “The Gyrators” . Most recently, Jamie has been composing music for commercials, music videos, and short films. Jamie also worked briefly as a Radio DJ on BoogalooRadio.com in London, Highgate, UK, on morning comedy/music show, “Straight Outta Highgate with Erica and Jamie”. ​ Outside of composing, Jamie helped rebuild the Rhodes Music Corporation, bringing back the original Rhodes electric piano featured in thousands of recordings. Jamie Bullock led a team that manufactured and sold the pianos to artists all over the world. He personally worked with Stevie Wonder, George Duke, Herbie Hancock, Greg Philingaines, and many other professional keyboardists to help develop the awareness of the Rhodes Mark 7 piano. UPDATE 12/2021: Jamie is once again working for Rhodes Music in an Artist Relations Role based in the UK on the new Rhodes Mark 8 Team! www.rhodesmusic.com Jamie is an accomplished musician (piano, keyboards, guitar, vocals, pro audio) with over 25 years of experience in professional recording, live performance, leadership, and private instruction. He currently lives in London, United Kingdom with his wife (and singer), Lara Beers, son, Jackson, and daughter, Lola. ​

Duane Sempson - Director of Post Production - The Enthusiast Network ”I've hired Jamie for numerous jobs at the studio. He continues to impress me with his ability to turn around amazing work in whatever the timeline. He's fun, positive and really brings our projects to life.”

Christopher Carmichael - Film Composer ”Jamie is an accomplished arranger with a keen dramatic sensibility and is a definite asset to any project he's involved in.”

Duane Sempson - Director of Post Production - The Enthusiast Network ”I've hired Jamie for numerous jobs at the studio. He continues to impress me with his ability to turn around amazing work in whatever the timeline. He's fun, positive and really brings our projects to life.”

TobiasMehler - Creative Director - Left Field Labs ”After successfully working with Jamie on multiple projects, I’m looking forward to the next time. His music chops are expert-level, he’s got a knack for cinematic timing, and his easy-going, positive communication style makes him a pleasure to work with.”

Jennifer Frappier - Director and Producer - “Chill” ”I’ve known Jamie both professionally and personally for almost 20 years. He is eloquent, trustworthy, easy to work with and has fantastic energy. You can tell that music brings him joy. I’m grateful to have worked with such a seasoned musician for my first documentary film, but I’m even luckier to call him a friend.” 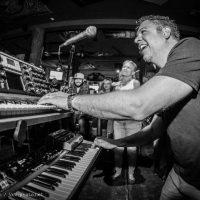 All About Jazz musician pages are maintained by musicians, publicists and trusted members like you. Interested? Tell us why you would like to improve the Jamie Bullock musician page.