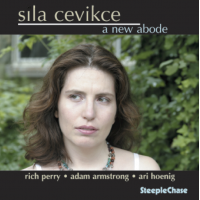 The art of jazz composition and improvisation are fully stated as Turkish born pianist Sila Cevikce provides some solid and noteworthy music on her debut release A New Abode. Since arriving in the U.S in 1993 she has sharpened her skills both academically at Berklee and professionally in performances with New York musicians as well as composing music for film and theater. What quickly becomes apparent is the depth, style, and articulation of Cevikce's muscial ideas which have influences from Wayne Shorter to Stravinsky.

The recording can hold its own with other modern post bop releases and reveals the keen interaction and creativity between modern jazz musicians. Though this is a showcase of Cevikce's ability it is also about the magical communication between a set of masterful players and gives the impression of a tight working unit rather than just studio musicians. This quintet is comprised of established and rising stars including saxophonists Rich Perry, Kim Bock, bassist Adam Armstrong, and drummer Ari Hoenig.

The music is filled with intricate transitions beginning with "Desperate Measures"? which aggressively shifts tempos changes and vamps filled with meaty solos supported by a stalwart rhythm section. Melody is an important factor with smooth sax harmonies on the title track and the gentle persuasions of "More I Cannot Wish You"? or the lush ballad "Simple Bossa"? which begins with a soft piano intro then moves to a warm saxophone melody. "Phasing Out"? contains interesting patterns that weave from free interplay to rapid swing.

Cevikce's playing skills are also quite noteworthy as she delivers a sense of quiet confidence with tinges of classical and modernism. Her keen writing is elevated by stellar contributions from each musician with a noticeable nod to tenor saxophonist Rich Perry who delivers some searing and memorable solos. No pun intended but A New Abode houses an exciting resident in the jazz neighborhood with the sure talents of Sila Cevikce.