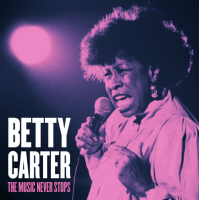 slideshow
After singing with Lionel Hampton in the late 1940s, vocalist Betty Carter had her first hit with Red Top. Teamed with vocalist King Pleasure in 1952, their vocalese duet put words to the solo melodies of tenor saxophonist Gene Ammons and trumpeter Gail Brockman on their 1947 version of Red Top. Between 1956 and 1964, Carter recorded six studio albums and then took a break to raise a family. By the time she returned at the end of the decade, she was in less demand. Her unusual way of phrasing—bending notes, rushing the tempo and adhering to bop scat attacks—were out of vogue in the fusion era.

But in the 1980s, when acoustic jazz staged a comeback, Carter again found an audience and acclaim. Her singular, rich voice had grown deeper, and she was even looser on songs, taking enormous artistic liberties with a renewed confidence. Performances were recorded throughout the decade. Then in 1988, Carter began recorded studio albums again starting with Look What I Got! (Verve).

On March 29, 1992, Carter performed at Jazz at Lincoln Center in a program entitled “The Music Never Stops." The results now appear for the first time on The Music Never Stops (Blue Engine), an album of previously unreleased material that features Carter at her stylistic peak.

The tracks are Ms. B.C., Make It Last, 30 Years, Why Him?/Where or When?/What's New, Tight!/Mr. Gentleman, Social Call, Moonlight in Vermont, The Good Life, Bridges, If I Should Lose You, Most Gentlemen Don't Like Love, Make Him Believe and Frenesi.

These tracks were divided among small groups and a big band, which on some tracks included strings. The small groups included Geri Allen, and Cyrus Chestnut on piano, Ariel Roland on bass and Greg Hutchinson and Clarence Penn on drums.

High points include Carter's own Tight!, which she introduced on her Betty Carter Album in 1974; a limber Social Call by Qusim Basheer and Jon Hendricks; Carter's own ballad Make Him Believe and Bob Haymes's ballad Make It Last.

Carter isn't to everyone's taste. She frequently sings too fast on songs that required a bit more lingering (Moonlight in Vermont and Frenesi) and her moaning technique can grow tedious as she bends songs out of shape. But once your ear adjusts to her voice-as-an-instrument approach, you come to realize that she had a beautiful tone and that each song was remarkably re-invented.

And here's If I Should Lose You...