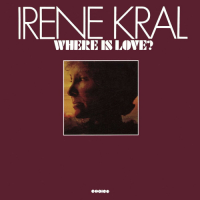 In 1975 and '78, singer Irene Kral released what were arguably her finest small-group albums—Where Is Love and Gentle Rain, respectively, for the Choice label. She was accompanied only by pianist Alan Broadbent. [Photo above of Irene Kral with daughters Jodi, left and Melissa, from Being Irene Kral's Daughter by Jodi Burnett]

A month after the second album was recorded and a bunch of months before it came out in 1978, Kral and Alan appeared with bassist Frank De La Rosa and drummer Benny Barth at the Douglas Beach House at Half Moon Bay, Calif., on September 11, 1977. Fortunately, someone was there to videotape Kral. Several years ago, the video of Kral singing four songs from the gig went up at YouTube. Sadly, the audio and video were a swimmy mess—pitchy and blurry. Kral died from breast cancer in 1978, around the time the album came out.

Last week, Joe Lang passed along word that his friend, Rod Nicas, a West Coast sound engineer, worked over the music from the four live tracks. As Rod said in an accompanying note: “The video quality is almost unwatchable, but I think the new sound tracks I produced allow a lot of Irene’s warmth on stage to come forth on the screen." Oh, to be able to play like Alan Broadbent:

Here's The Touch of Your Lips...

Bonus: Kral's very first recording was singing Moonlight in Vermont with Maynard Ferguson's band in 1957. Kral, of course, was the younger sister of Roy Kral, of Jackie & Roy fame. Here's one of the finest versions of this song...

And here's Kral singing Imagination with the same band...