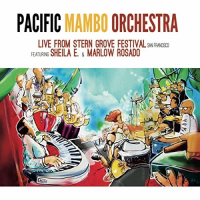 Putting together your follow-up can't be easy when your self-produced, self-titled debut wins the notoriously competitive Best Tropical Latin Album GRAMMY® Award. Where could trumpeter Steffen Kuehn (from Germany) and pianist Christian Tumulan (from Mexico) lead the Pacific Mambo Orchestra (PMO) from there?

Tumulan and Kuehn smartly construct PMO's second release to do what they do best: They go big, with some songs ringing out with up to twenty instrumental and human voices. They go long, bookending seven live performances with vocal and instrumental studio versions of the Japanese traditional "Sakura" and inserting a howling studio take on Earth Wind & Fire's "Getaway." And they go hard, powered by an incendiary Latin percussion section (timbalero Omar Ledezma Jr. from Venezuela, bongo expert Braulio Barrera from Peru, and Bay area congero Javier Cabanillas).

They blow like possessed madmen, in fact, pretty much throughout Live from Stern Grove Festival. The band's collective credentials include work with a constellation of jazz, Latin and Latin jazz greats including Jerry Gonzalez and the Fort Apache Band, Pharoah Sanders, Taj Mahal, Cedar Walton, Jamaaladeen Tacuma and Carlos Santana, and even though their material focuses on danceable hot mambo, most musicians in the ensemble burn through their individual parts with smoking jazz chops.

Two live tunes feature percussionist Sheila E. (or, as she's introduced, "The First Lady of 'El Timbal'") on timbales. She leads the PMO as they shred Tito Puente's "Ran Kan Kan," horns burning so hot they leave blisters on the rhythm section, while Tumulan's piano cranks up the heat behind "Mona Lisa," a twirling Latin dance about a woman's burning desire to salsa. Most importantly, it sounds like the PMO had a blast ripping up these two tunes, and this recording allows that fun sound to stream through.