The legendary “Hi De Ho” man was a energetic showman, gifted singer, talented actor and trendsetting fashion plate. A truly larger than life figure in American pop culture, immortalized in cartoons and caricatures, Calloway also led one of the greatest bands of the Swing Era. Consistently ranked among the top bands of the 1930s and 1940s, Calloway's orchestra entertained millions during its heyday, and the bandleader himself continued thrilling audiences up until the time of his death.

Born in Rochester, New York, Cab grew up in Baltimore. He studied music and voice as a youth, singing at local speakeasies when he could. Cab also excelled in sports. During his senior year in high school, he played for the Baltimore Athenians of the Negro Professional Basketball League. Torn between sports and music, he finally chose the latter. His mother, however, wanted him to follow his father's footsteps and become a lawyer. With that goal, Cab moved to Chicago to attend Crane College.

His older sister Blanche was already in Chicago, singing and dancing professionally. She helped Cab get a job with her in the musical review Plantation Days, when the show closed in 1927 Cab found a job singing at the Dreamland Cafe. In 1928 he went to work as the emcee of the Sunset Cafe, which also featured a house band called Marion Hardy's Alabamians. One day, during rehearsal, he decided to do a number with the band. They liked him so much they made him their leader. Cab dropped out of college to pursue a career as entertainer.

MCA signed the Alabamians in 1929 and sent them on a tour, which ended up in Harlem. The group flopped in New York, being perceived as ''unhip.'' The band decided to return to Chicago, but Cab remained in New York, where he took over as leader of a group called the Missourians. He left after only a brief time to return to Chicago, where he once again led the Alabamians. He soon returned to New York, where Louis Armstrong helped him get a spot in the Hot Chocolates review.

The Alabamians made a return engagement to New York late in the year, appearing at the Savoy Hotel, with Cab as leader. When the group returned to Chicago, Cab again remained behind and took over the Missourians. This time, he renamed the group as Cab Calloway and His Orchestra. They were booked into the Cotton Club in early 1931. The rest is history.

Always appearing in a white silk suit, with top hat and tails, Cab took the public by storm with such songs as ''Minnie the Moocher'' and ''Kickin' the Gong Around'' (the latter a reference to smoking opium). He gained national attention when Bing Crosby featured him on the Lucky Strike radio show. He was the first black entertainer to perform on a ''white'' program. One night, while performing ''Minnie the Moocher'' on the radio, he forgot the lyrics and started to scat. His famous trademark, ''Hi- De-Ho,'' was born.

In 1932 he made his first of many films, which include such classics as the Big Broadcast and Stormy Weather. The orchestra was also featured on its own radio program, Cab Calloway's Quizzicale during 1941 and 1942. The show was aired on both Mutual and NBC Blue as a sustainer, since no sponsor could be found for a program which featured African-American entertainers.

Cab's orchestra remained on top throughout the 1930s and into the war years, touring extensively in the United States and Canada. They also toured Europe in 1934. Many critics felt that Cab's outfit of the early 1940s, which featured Dizzy Gillespie, Ben Webster, Cozy Cole and Chu Berry, was his best line-up. The end of the swing era, however, took its toll, and in 1948 Cab was forced to disband. He then organized and toured with a sextet, occasionally reforming a big band for special engagements. He continued to perform, touring the world for more than forty years, both with small outfits and solo, until his death. His recordings are readily available in constant reissues and compilations.

In the early 1950s Calloway toured the United States and Europe in the stage production of Porgy and Bess. In the late 1960s and during the 1970s he worked on Broadway, starring is such shows as Hello, Dolly!, with Pearl Bailey, and The Pajama Game. A turning point came when Cab did a cameo in the 1980 movie The Blues Brothers,” which renewed interest in his career, and introduced him to a new generation. He appeared in concert saluting, among others, lyricist Ira Gershwin and composer-pianist Eubie Blake, and briefly conducted the band at a salute to jazz singer Ella Fitzgerald, “Hearts for Ella,” in 1990. Cab's own 80th birthday, in 1987, was marked with a concert in Carnegie Hall, when a half dozen of his former sidemen returned to celebrate with him.

Happily, before it was too late, Calloway, who loved being called “a living legend,” began receiving some renewed, overdue acknowledgement; the music room at the School of the Arts in Baltimore was named in his honor in 1983; Cab was a recipient of the Ebony Lifetime Achievement Award in 1985. The Negro Actors' Guild honored him during a benefit at the Shubert Theatre in New York City, in 1988. Calloway was presented with the Beacons in Jazz Award, from the New School for Social Research in New York City, in 1990. In September 1994, the Smithsonian Jazz Masterworks Orchestra, conducted by Gunther Schuller, included “Harlem Camp Meeting,” “Evenin',” and “Cupid's Nightmare,” arrangements which the Calloway band had performed some 60 years before, as part of a swing era celebration concert in Washington, D.C. Cab received the coveted National Medal of the Arts, received in a White House ceremony in October 1993.

Gunther Schuller, a composer and author, has offered studied, high praise for Cab and his orchestra. “First of all,” he wrote, “Calloway was a magnificent singer, quite definitely the most unusual and broadly gifted male singer, of the '30s. Second, considering his enormous popularity, and therefore the temptation to cater to the basest of mass tastes, Calloway's singing - and even his choice of material is of far higher caliber than any other male vocalist's. Moreover, Calloway, amazingly, even in his most extravagant vocal antics, never left the bounds of good taste. It was as though he had a built-in mechanism that kept him from turning corny. Third, he was a true jazz musician and as such surrounded himself with a real jazz orchestra, something no other band leading vocalist cared or managed to do.” Show less 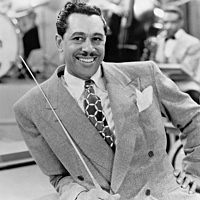 All About Jazz musician pages are maintained by musicians, publicists and trusted members like you. Interested? Tell us why you would like to improve the Ivie Anderson musician page.