Benjamin David Goodman was born on May 30, 1909 in Chicago, Illinois. He was the eighth child of immigrants David Goodman and Dora Grisinsky Goodman, who left Russia to escape anti-Semitism. Benny's mother never learned to speak English. His father worked for a tailor to support his large family, which eventually grew to include a total of 12 children, and had trouble making ends meet.

When Benny was 10 years old, his father sent him to study music at Kehelah Jacob Synagogue in Chicago. There, Benny learned the clarinet under the tutelage of Chicago Symphony member Franz Schoepp, while two of his brothers learned tuba and trumpet. He also played in the band at Jane Addams' famous social settlement, Hull-House.

Benny's aptitude on the clarinet was immediately apparent. While he was still very young, he became a professional musician and played in several bands in Chicago. He played with his first pit band at the age of 11, and became a member of the American Federation of Musicians when he was 14, when he quit school to pursue his career in music. When his father died, 15-year-old Benny used the money he made to help support his family. During these early years in Chicago, he played with many musicians who would later become nationally renowned, such as Frank Teschemacher and Dave Tough.

When Benny was 16, he was hired by the Ben Pollack band and moved to Los Angeles. He remained with the band for four years, and became a featured soloist. In 1929, the year that marked the onset of the Great Depression and a time of distress for America, Benny left the Ben Pollack band to participate in recording sessions and radio shows in New York City.

Then, in 1933, Benny began to work with John Hammond, a jazz promoter who would later help to launch the recording careers of Billie Holiday and Count Basie, among many others. Hammond wanted Benny to record with drummer Gene Krupa and trombonist Jack Teagarden, and the result of this recording session was the onset of Benny's national popularity. Later, in 1942, Benny would marry Alice Hammond Duckworth, John Hammond's sister, and have two daughters: Rachel, who became a concert pianist, and Benji, who became a cellist.

Benny led his first band in 1934 and began a few-month stint at Billy Rose's Music Hall, playing Fletcher Henderson's arrangements along with band members Bunny Berigan, Gene Krupa and Jess Stacy. The music they played had its roots in the Southern jazz forms of ragtime and Dixieland, while its structure adhered more to arranged music than its more improvisational jazz counterparts. This gave it an accessibility that appealed to American audiences on a wide scale. America began to hear Benny 's band when he secured a weekly engagement for his band on NBC's radio show "Let's Dance," which was taped with a live studio audience.

The new swing music had the kids dancing when, on August 21, 1935, Benny's band played the Palomar Ballroom in Los Angeles. The gig was sensational and marked the beginning of the years that Benny would reign as King: the Swing Era.

Teenagers and college students invented new dance steps to accompany the new music sensation. Benny's band, along with many others, became hugely successful among listeners from many different backgrounds all over the country.

During this period Benny also became famous for being colorblind when it came to racial segregation and prejudice. Pianist Teddy Wilson, an African-American, first appeared in the Ben ny Goodman Trio at the Congress Hotel in 1935. Benny added Lionel Hampton, who would later form his own band, to his Benny Goodman Quartet the next year. While these groups were not the first bands to feature both white and black musicians, Benny's national popularity helped to make racially mixed groups more accepted in the mainstream. Benny once said, "If a guy's got it, let him give it. I'm selling music, not prejudice."

Benny's success as an icon of the Swing Era prompted Time magazine in 1937 to call him the "King of Swing." The next year, at the pinnacle of the Swing Era, the Benny Goodman band, along with musicians from the Count Basie and Duke Ellington bands, made history as the first jazz band ever to play in New York's prestigious Carnegie Hall.

Following the concert at Carnegie Hall, the Benny Goodman band had many different lineup changes. Gene Krupa left the band, among others, and subsequent versions of the band included Cootie Williams and Charlie Christian, as well as Jimmy Maxwell and Mel Powell, among others.

The Swing Era began to come to a close as America got more involved in World War II. Several factors contributed to its waning success, including the loss of musicians to the draft and the limits that gas rationing put on touring bands. However, though the big band days were drawing to a close and new forms of music were emerging, Benny continued to play music in the swing style. He dabbled in the "bop" movement of the 1940s, but never succumbed, as the rest of the world did, to the allure of rock and roll influences in the 1950s and 1960s. Instead, Benny tried his hand at classical music, doing solos with major orchestras, and studying with internationally acclaimed classical clarinetist Reginald Kell.

These appearances further demonstrated Benny's range as a musician. His talent was unquestionable from the time he was 10 years old, and in recording sessions throughout his career, he very rarely made mistakes. Krell had helped him to improve some of his techniques, making Benny's playing even stronger.

In 1953, Benny's band planned to join Louis Armstrong and his All Stars in a tour together, but the two band leaders argued and the tour never opened at Carnegie Hall, as had been planned. It is not certain whether the tour was canceled due to Benny's illness or the conflict between the band leaders. The rest of the decade marked the spread of Benny's music to new audiences around the world. The Benny Goodman Story, a film chronicling his life, was released in 1955, exposing new and younger audiences to his music. Benny also toured the world, bringing his music to Asia and Europe. When he traveled to the USSR, one writer observed that "the swing music that had once set the jitterbugs dancing in the Paramount aisles almost blew down the Iron Curtain."

During the late 1960s and 1970s, Benny appeared in reunions with the other members of his quartet: Teddy Wilson, Gene Krupa and Lionel Hampton. In 1978, the Benny Goodman band also appeared at Carnegie Hall again to mark the 30th Anniversary of when they appeared in the venue's first jazz concert.

In 1982, Benny was honored by the Kennedy Center for his lifetime achievements in swing music. In 1986, he received both an honorary doctorate degree in music from Columbia University and the Grammy Award for Lifetime Achievement. He continued to play the music that defined his lifetime in occasional concert dates until his death in June 1986, of cardiac arrest. He was laid to rest after a short nonsectarian service with around 40 family members and friends in attendance on June 15, 1986 at Long Ridge Cemetery in Stamford, Connecticut. Through his amazing career, Benny Goodman did not change his style to conform to the latest trends, but retained the original sound that defined the Swing Era and made him the world renowned King of Swing. Show less 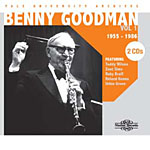 All About Jazz musician pages are maintained by musicians, publicists and trusted members like you. Interested? Tell us why you would like to improve the Benny Goodman musician page.