Best remembered for his risque Vegas act of the 1950s, Louis Prima was the ultimate showman. Loud, boisterous, and completely out front, his mix of rhythm and blues, big band music, Italian novelty tunes, and Dixieland made him one of the hottest performers of his era.

Born and raised in New Orleans, Prima studied violin as a child. He took up the trumpet at age fourteen after his brother, who was also a musician, went on tour and left behind an old instrument. Prima taught himself how to play and in the late 1920s began to perform professionally, influenced by Louis Armstrong and the rich jazz heritage of his hometown.

In 1934 Prima moved to New York at the suggestion of bandleader Guy Lombardo. At first he struggled to find work but soon organized his own band, the New Orleans Gang, for an engagement at the Famous Door. The group quickly proved popular, recording for a variety of labels over the next several years. Despite this success, though, Prima remained relatively unknown to the general public, except as composer of the song ''Swing, Swing, Swing,'' which proved a big hit for Benny Goodman in the late 1930s.

In 1939 Prima broke up the New Orleans Gang and formed his own big band. Known as the Gleeby Rhythm Orchestra, Prima's new outfit finally broke through in 1944 with ''Angelina,'' the first of several Italian novelty hits. Other popular songs written or performed by Prima during the late 1940s include ''Bell Bottom Trousers,'' ''Robin Hood,'' and the ballad ''A Sunday Kind of Love.'' Prima handled male vocals in the band. Jack Powers also sang during the mid-1940s. Female vocalist was Lily Ann Carol.

In 1948 Prima hired 16-year-old Dorothy Keely as a replacement for Carol. The loud and boisterous Prima found a perfect foil in the shy young singer, whom he renamed Keely Smith. The two produced strong stage chemistry together, playing off their opposite personalities, and quickly became the focus of each performance. In 1950 Prima broke up the band and formed a successful nightclub act with Smith. In 1953 they married.

By late 1954 Prima and Smith's act had run its course, and Prima began to look towards Las Vegas. He recruited popular New Orleans tenor saxophonist Sam Butera to put together a new band for a booking at the Sahara Hotel. Billed as the ''Wildest Show in Vegas,'' the new act was an immediate hit, and Prima was suddenly in demand, appearing frequently on television and in film. He soon signed with Capitol Records, producing several albums over the next few years and charting several hits, including ''Just a Gigolo'' and ''Oh, Marie!'' In 1958 he and Smith won a Grammy for their rendition of ''That Old Black Magic.''

In 1961 Prima switched labels from Capitol to Decca and took his show to the Desert Inn. His popularity was at its peak, and both moves resulted in lucrative contracts. At the same time, however, problems in his marriage with Smith finally came to a head. She divorced him and left the act, causing him to lose out on both deals. Prima signed singer Gia Maione and continued performing. His popularity suffered, though, without Smith. He recorded one last album for Capitol in 1962.

In 1967 Disney signed Prima to voice the character of King Louis in the Jungle Book, briefly bolstering his flagging career. By the early 1970s Prima was no longer able to draw the same type of crowds that he had previously drawn, and he and Butera moved back to New Orleans, where they frequently played the French Quarter.

In 1975 Prima underwent surgery to remove a brain tumor. During the operation he fell into a coma and never regained consciousness. Louis Prima passed away in 1978. Show less

Louis Prima: King of the Swingers

Louis Prima Jr. & The Witnesses To Release Blow On June 10

Louis Prima To Get Star On Hollywood Walk of Fame. Louis Prima Jr. To...

Hetty and the Jazzato Band 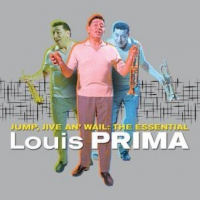 All About Jazz musician pages are maintained by musicians, publicists and trusted members like you. Interested? Tell us why you would like to improve the Louis Prima musician page.