Ella Mae Morse was one of the most exciting vocalists of the ‘40s and ‘50s, a hard-to-classify, Texas-born white singer whose vocals were deeply influenced by her apprenticeship with a black guitarist who taught her the blues. Her style defied characterization, as it embraced boogie-woogie, blues, jazz, swing, country and at times came remarkably close to what would be known as rock & roll.

Ella Mae Morse was born in Mansfield, Texas on Sept. 12, 1924, the daughter of a drummer-father and a pianist- mother. After singing in her father's jazz combo,when she wasn't yet 14,she had her first taste of the big time, when Jimmy Dorsey's band came to Dallas for a stay at the Adolphus Hotel and she called for an audition.Believing that Morse was indeed 19, as she and her mother claimed, Dorsey hired her. When he received a letter from the school board declaring that he was responsible for Morse's care, Dorsey fired her.

Morse played predominantly as a solo artist thereafter, and from the early 1940s to the early 1950s released such top 10 hits as "House Of Blue Lights," (earned 10 gold records) "Shoo Shoo Baby," "No Love, No Nothin'," and "The Blacksmith Blues."

Morse’s final recording was “Morse Code,” for Capitol in 1957. She did continue to perform occasionally after that, often with the Ray McKinley Band. 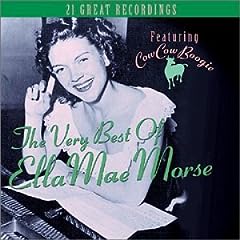 The Very Best of Ella...

All About Jazz musician pages are maintained by musicians, publicists and trusted members like you. Interested? Tell us why you would like to improve the Ella Mae Morse musician page.