The legendary "Hi De Ho" man was a energetic showman, gifted singer, talented actor and trendsetting fashion plate. A truly larger than life figure in American pop culture, immortalized in cartoons and caricatures, Calloway also led one of the greatest bands of the Swing Era. Consistently ranked among the top bands of the 1930s and 1940s, Calloway's orchestra entertained millions during its heyday, and the bandleader himself continued thrilling audiences up until the time of his death. Born in Rochester, New York, Cab grew up in Baltimore. He studied music and voice as a youth, singing at local speakeasies when he could

As a jazz venue, the mid-town Manhattan club Royal Roost had a short life span. The Royal Roost opened in 1948, but the jazz scene had moved past it less than two years later. In Greenwich Village, twenty-five-year-old photographer Herman Leonard had just opened his first photography studio to the south. A bebop fan, he was ... 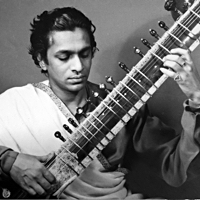 Indian Sun: The Life And Music Of Ravi Shankar Oliver Craske 658 Pages ISBN: 978-0-571-35085-8 Faber & Faber2020 The title of Oliver Craske's fascinating and exhaustively researched biography of Ravi Shankar, one of the greatest artists of the twentieth and early twenty-first centuries, is something of a misnomer, for ...

Jazz musicians are rarely called shamanistic but the description fits Rahsaan Roland Kirk precisely. Clad in black leather trousers and heavy duty shades (he was blind from the age of two), a truckload of strange looking horns strung round his neck—two or three of which he often played simultaneously--twisting, shaking and otherwise contorting his body, stamping ...