After early experience in Chicago with the bands led by Tom Gerun and Harry Sosnik, Woody Herman toured with Gus Arnheim. In 1934, he joined Isham Jones, and when Jones's group disbanded in 1936 Herman used its leading sidemen as the nucleus for his own orchestra. This band went through a number of changes of personnel, such as the inclusion in 1943 of Chubby Jackson and in 1944 of Neal Hefti, Ralph Burns, Flip Phillips, and Bill Harris (by the mid-1940s, under the name Herman's Herd, it was internationally famous for the force and originality of its music. Herman reformed the band in 1947, and the distinctive feature of the Second Herd was the group of saxophonists (three tenor and one baritone) who came to be known as the Four Brothers; among the musicians who played in the section were Serge Chaloff, Stan Getz, Zoot Sims, Al Cohn, and Gene Ammons.

After the demise of the Second Herd in 1949, Herman continued to lead bands; these were perhaps less creative, but their consistently high level of musicianship assured his continuing reputation. The Anglo-American Herd, which he organized in 1959, was significant in the history of English Jazz; another of the more distinctive later bands, the Swinging Herd, was formed in 1962 and featured such excellent soloists as Bill Chase, Phil Wilson, and Sal Nistico. Herman broadened his scope in the late 1960s, when he took up soprano saxophone and included young jazz-rock players in his groups. He toured widely in the 1970s, and in the early 1980s held a residency in a club in New Orleans. Thereafter he worked principally on the West Coast, before taking up another residency in the St. Regis Hotel, New York, in 1985. He celebrated his 50th anniversary as bandleader with the formation of a new orchestra in 1986.

Although Herman's instrumental expertise was considerable, his essential importance was as an organizer. His rare ability to assemble and sustain bands notable for the quality of their musicians grew especially clear in the late years of World War II, when his group consisted of brilliant improvisers whose ensemble playing was exuberant and incisive; Igor Stravinsky was so impressed by its sound that in 1945 he composed his Ebony Concerto for the band. The harmonic procedures of bop influenced Herman's next orchestra even more deeply, confirming his freedom from the contemporary sectarianism in jazz. The ebullient Lemon Drop (1948) with its succession of exciting improvisations illustrates Herman's shrewd open-mindedness as a bandleader as do more overtly ambitious recordings like the two-part Lady McGowan's Dream (1946) and the four-part Summer Sequence (1946-7), both composed by Burns.

The Early Autumn Story and 10 Faves 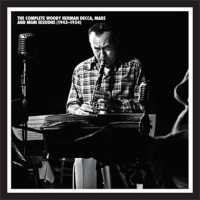 All About Jazz musician pages are maintained by musicians, publicists and trusted members like you. Interested? Tell us why you would like to improve the Woody Herman musician page.