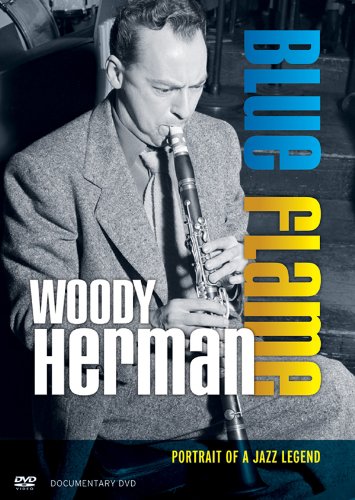 Blue Flame—Portrait Of A Legand

Born on May 16, 1913, Woodrow Charles "Woody" Herman is the subject of this feature-length documentary, produced by Jazzed Media's Graham Carter in association with Al Julian's The Woody Herman Society in recognition of the clarinetist, saxophonist, singer, bandleader and American jazz icon's Centennial birthday. Woody Herman: Blue Flame—Portrait of a Jazz Legend is much more than an entertaining film about one of the greatest band leaders of all time, it's an educational and historical work of art packed with 400 rare photographs and personal stories from 35 musicians and historians covering his more than 50-year career.

The film documents the many music-related titles attributed to Herman throughout his life: bandleader, coach, teacher, mentor, road father, innovator and more. Through interviews with the many musicians that performed with one or more incarnations of his Herds bands, Graham successfully paints a picture of a central figure in the jazz world responsible for nurturing, developing and helping launch the careers of many jazz greats. From the opening title segment, "Four Brothers," insights from luminaries including Jeff Hamilton, Terry Gibbs, Joe Lovano, John Fedchock, Ron Stout, Bobby Shew and Frank Tiberi establish the undeniable fact that Herman's Herds served as incubators of talent.

The "Early Years, 1913-35" segment, chronicles a young Herman, whose love for the music led him to play the saxophone as child, earning him the name "Boy Wonder," followed by his further development as a musician. The creation of his first orchestra—later known as "The Band That Plays The Blues," from which his theme song "Blue Flame" was derived—and the formation of The First Herd in the early'40s, featuring interviews with pianist/arranger Ralph Burns and historian Dan Morgenstern, who states that Herman created "A fraternity that was rare," lead to one of Herman's proudest moment during this period, when Russian composer Igor Stravinsky actually wrote a chart for the band even though it was not jazz.

Testimonies come from drummer Sonny Igoe, Bill Holman and saxophonist Dick Hafer—all associated with The Third Herd—as well as scenes featuring trumpeter Paul Fontaine, saxophonist Sal Nistico and Herman's right hand man, pianist Nat Pierce (all associated with the Swinging Herd of the '60s). A lot of interesting stories emerge throughout the film, including Herman's admission that, though his greatest band, the second Herd (commonly known as the " Four Brothers" band), left a lasting impact, it was a losing proposition financially. Financial difficulties haunted the bandleader throughout his career but did not deter him from performing the music he loved to the time of his death in October, 1987.

Graham also covers the many transformations of the Herd, including Herman's famous Thundering Herds, together from 1968 through 1979, and the evolution of his group through the jazz fusion era with his Young Thundering Herd of the '80s—perhaps his youngest group and boasting many a college age players. The film presents an array of jazz experts like historian Dr. Herb Wong, and touches upon the importance of musicians such as bassist Chubby Jackson, trumpeter Pete Candoli, trombonist Carl Fontana and pianist Ralph Burns, and their roles in Herman's band.

Two of Carter's favorite jazz heroes just happen to be saxophone legend Phil Woods and Woody Herman. stating, "Both having 'wood' in their names must mean something...and are pretty special to me." Well, if anything, Blue Flame is certainly an affirmation of those sentiments but goes far beyond any personal tribute; instead, it is an historical and educational tool that tells the story of the life, music, triumphs and tragedies of a man who, to a large degree, was responsible for shaping the big band music of today.