Sal Nistico, born Salvatore Nistico 2 April 1938 in Syracuse (New York), died 3 March 1991 in Berne, Switzerland, was a jazz tenor saxophonist associated for many years in the mid-'60s with Woody Herman's Herd. He started playing alto sax, switching to tenor in 1956 and briefly played baritone sax. In 1965, he joined Count Basie but returned on many occasions to play with Herman. He also played with Nat Adderley, Don Ellis, Stan Tracey, Chuck Mangione and Buddy Rich. While not a well-known public figure, he was highly respected by his fellow tenor sax players as a "musicians' musician". Sal's solo work contrasts his big band work 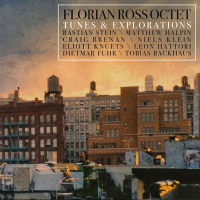 Florian Ross is a German-born composer, arranger and jazz pianist who has a fondness for releasing albums with double names which began with his debut release Seasons & Places (Naxos Records, 1998). He has continued with that “idée fixe" in almost every year in which he has delivered a release. This year is no exception; the ...

Legacy is a fleeting notion. It is incomprehensible in real time when a career hits high points, when certain doors open to quantitative opportunity. Jay Thomas can tell you a thing or two about that, based on his own personal experience as a jazz artist over half a century. His story includes playing on the Seattle ...

For much of the latter part of the 19th century and into the post-war years, Los Angeles's San Fernando Valley was a center of Italian immigration. Prior to residential development in the late 1940s and early 1950s, the Valley was a draw for those who arrived in the States from Italy to work as stone masons ...