A fine big band drummer, Sonny Igoe was inspired by Gene Krupa, Kenny Clarke and Max Roach. He was originally self-taught and at age 16 won a Gene Krupa drumming contest. Igoe was in the Army during 1942-46 and then played with Tommy Reed (1946-47), Les Elagart (1947) and Ina Ray Hutton (1948). His most significant musical associations were with Benny Goodman (the bebop band of 1948-49), Woody Herman's Third Herd (1950-52) and Charlie Ventura (1953-55). Since then Igoe has spent most of his career as a studio musician and as a teacher. However he has remained active and, starting in the 1980's, he frequently co-led a big band with Dick Meldonian which recorded several albums for Progressive. 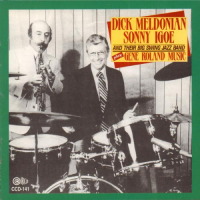 Saxophonist Dick Meldonian began his recording career in Charlie Barnet's band in 1950. He then moved on to Stan Kenton at the start of 1952. He remained with Kenton until the mid-1950s, when he left to record on 12-inch LPs with Pat Moran, Sam Most, Erroll Garner, Nat Pierce, Bill Russo, Marion Evans (he's on the ...

Back in the last millennium, shortly after this column first saw the light of day, I posted a list of twenty “desert island" albums, those that would be snugly ensconced in a crash-proof, water-tight carrying case should yours truly ever be marooned on a miniature atoll with nothing to relieve the boredom save palm trees, coconuts, ...

Sonny Igoe, who played drums with a succession of prominent leaders, died this week at the age of 88. In 1939 when Igoe was 16, he won the first Gene Krupadrum competition. After four years in the United States Marine Corps in World War Two, he worked briefly in a band of former Marines, then began ...