The city of New Orleans has the distinction of being the ‘birthplace of jazz’ so its appropriate that in New Orleans in or around 1885 to 1890 would be born the self-proclaimed “inventor of jazz”.

Ferdinand Joseph Lemott (Lamothe) and his story is one of mystery, legend, genius, with an incredulous outcome, and original musical score.

Being considered a Creole in the Crescent City had its advantages in the fact that he was exposed to the fine arts and music as a child. He would undertake formal piano lessons with one Tony Jackson who was considered a wunderkind piano professor with exceptional musical ability, mirrored by the young student, who demonstrated an elevated level of talent, and the confidence to perform it.

We pick up on his trail as he moved to Biloxi, Mississippi to stay with his godmother, and so begins life on the road. He became a professional pianist at this time, playing in the brothels in Biloxi, then back to New Orleans where he played in the red light district of Storyville, learning and absorbing the styles of the famous ‘professors’, who were known for their vast repertoires and dazzling technique. This would prove to be an invaluable experience as he would also absorb classical, vaudevillian, theatrical, opera, marches, blues, stomps, ragtime, French and Spanish music. The Spanish would be a factor as he mentioned in coining the phrase “Latin tinge”. New Orleans was a conduit for the music that was coming out of Cuba since before the turn of the century, and the habaneras were all the rage in the early 1900’s.

Sometime along the way, he changed his name to Morton, and then added Jelly Roll as a stage name. The pianist known as Jelly Roll Morton went on a cross country tour that literally covered most of the U.S. He was quite the bon vivant, and pianist extraordinaire becoming very adept at ‘cutting heads’ where he would boldly challenge the local piano players, and wind up as the house pianist until he moved on, which from what we can gather, was continually. He can be verified as turning up in Mississippi, Alabama, Florida, Colorado, Missouri, Houston, California, Texas, and in New York. We are privy here to a live witness account by the stride piano player James P. Johnson, who saw him play in New York in 1911, first describing his flamboyant dress and entry with two beautiful women, then his elaborate ritual at the piano before sitting down, striking a first sustained chord then “he’s gone”!

By the time he hit New York, he had already written quite a few tunes as “New Orleans Blues”, “Jelly Roll Blues”, “King Porter Stomp”, and “Georgia Swing”, all around 1905 to ’07. He then surfaced again in Los Angeles in 1917, and was running a hotel with his then wife Anita Gonzales. He played in Denver, traveled some more, until he showed up in Chicago in 1923.

In Chicago he wrote “Wolverine Blues” which was published by Melrose Publishing. He would go on to write many more songs for them and start a relationship that would turn out to be ill fated for him. He recorded solo and duets with King Oliver, and with the New Orleans Rhythm Kings for the Gennett label, in the “hot style’, of the period.

He did his legendary piano rolls recordings between ’23 and ’24. I would like to quote here from Ardie Wodehouse, an authority on Jelly Roll’s piano rolls. “These roll renditions combine the sound world of a jazz ensemble, the rhythmic complexities of African drumming, the contrapuntal intricacy of a Bach fugue, and the structural momentum of a classical sonata”.

In 1926 he recorded what would be his crowning achievement when he did sixteen sides for Victor as “Jelly Roll Morton and the Red Hot Peppers”. The band was a collection of top tier New Orleans musicians, and the arrangements were skilled, and complex, leaving plenty of room for individual soloing. He would prove to be a brilliant composer for hot ensembles, being able to capture and portray the musical feel of New Orleans. These sessions with the Red Hot Peppers still hold up today as innovative and significant in revealing his development of melody and harmony, control of tempo and dynamics and his pioneering in syncopation.

He moved to New York in 1928 and from then until ’30 he recorded fifty eight more sides for Victor. There would be a lot of different names of his bands under which his recordings were done. Most of these of course start with Jelly Roll Morton then we have Orchestra, Jazz Trio, Trio, Six/Seven, Incomparables, Kings of Jazz, Steamboat Four, Jazz Band, and Jazz Kids. There was also The Levee Serenaders, and the St. Louis Levee Band.

By 1930, there was to be a dramatic turnaround for Jelly Roll, Victor did not renew his contract, and his luck started to run out. He worked in small clubs and became something of a novelty act. The fad and focus at the time was the big bands and he was viewed as archaic. The music which helped to shape an American musical identity was slipping through the cracks into obscurity. He was receiving no royalty for his songs even though big names like Benny Goodman were covering his songs and getting rich. He scuffled around New York, and in 1935 decided to move to Washington D.C., where he became a bartender.

After a few more lean years, he was approached by musicologist Alan Lomax to record his songs and story for the Library of Congress. (Thank Goodness!!) This took place between May 23 and June 7, 1938. He narrated his own story accompanying himself on piano.

He moved back to New York that same year, and tried to fight for his song rights and royalties but to no avail. Melrose never sent him much anyway, and had included his own name as composer so Jelly Roll was essentially ripped off. He tried going to ASCAP but that was futile also and received just a fraction of what he should have.

He did some last sessions in Dec. 1939 with the New Orleans Jazzmen featuring Sidney Bechet, but was not in good health due to recent heart problems.

This is just a short profile on a seminal figure in the history of jazz. I recommend people to go seek out his music and really listen to what he was doing. Jelly Roll Morton was light years ahead of everyone else in ability, knowledge, technique and confidence. He would reflect in his later lean years about his contribution, and believed he was deprived of a lot of the credit he felt he deserved. It’s a shame he did not get his due when he was alive, but he would be glad to know how his reputation and status as legend has grown and there’s a lot of us who consider him Mr. Jelly Lord, “inventor of jazz”.

Blues And Stomps From... 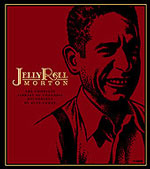 All About Jazz musician pages are maintained by musicians, publicists and trusted members like you. Interested? Tell us why you would like to improve the Jelly Roll Morton musician page.