A brilliant keyboard virtuoso, Earl “Fatha” Hines was one of the first great piano soloists in jazz, and one of the very few musicians who could hold his own with Louis Armstrong. His so-called 'trumpet' style used doubled octaves in the right hand to produce a clear melodic line that stood out over the sound of a whole band, but he also had a magnificent technical command of the entire range of the keyboard.

Earl Kenneth Hines was born into a musical family in Duquesne, Pennsylvania, on December 28, 1905. His father worked as a foreman at the local coal docks and played cornet with the Eureka Brass Band, a group that performed at picnics and dances. His mother, played organ and gave him his first piano lessons. Hines's sister, Nancy, also played organ, and his brother, Boots, played piano; his aunt sang light opera and his uncle played a variety of brass instruments. At age nine Hines started taking piano lessons, but he soon outgrew his teacher. He then studied classical technique under Von Holz, a teacher who introduced him to exercise books, and began to dream of becoming a concert pianist.

In his teens Hines moved to Pittsburgh, where he attended Schenley High School and continued to study music. His musical direction changed abruptly when family members took Hines to the Liederhouse, a club featuring jazz, and he fell in love with the rhythm-filled music. After discovering the burgeoning jazz scene, he abandoned his plans to play classical music and immersed himself in jazz. At age 15 he formed a group with a violinist and drummer, and soon the trio was performing at high school functions, nightclubs, and church socials. Because Hines worked many late-night engagements, he decided to leave school when he was 16.

In 1922 Hines went to work with singer/band leader Lois B. Deppe at the Liederhouse, where he earned $15 a week. The band made forays into West Virginia, Ohio, and New York City, and in 1923 the young pianist traveled to Richmond, Indiana, where he attended his first recording session. In 1924 Hines led his own band for a short time and then, following the advice of pianist Eubie Blake, he moved to Chicago. In Chicago he met a cadre of first-class musicians, including Louis Armstrong, Jelly Roll Morton, and Benny Goodman, who were beginning to re-write the rules of jazz. In 1927 he joined with Armstrong and Zutty Singleton, and the trio performed a regular gig at the Café Sunset, an establishment that catered to gangsters and other high-dollar rollers. When the club temporarily closed in 1927, the band broke up and Hines joined clarinetist Jimmy Noone's band at the Apex Club. Armstrong, however, would soon call again, and together the old friends would make jazz history.

In 1928 Hines rejoined Louis Armstrong on the Hot Five and Hot Seven recording sessions, playing on the classic "West End Blues", "Fireworks", "Basin Street Blues" and composing " A Monday Date", the young pianist was transformed from a local talent with potential into a jazz innovator to be emulated. Hines played with drummer Singleton, banjoist Mancy Cara, trombonist Fred Robinson, and clarinetist Jimmy Strong, and the group broke new ground, opening up a range of new musical possibilities for jazz players. Hines, was Armstrong's match, and the two traded solos and ideas, taking one another to new heights. No one had ever played the piano like that. He fashioned complex, irregular single- note patterns in the right hand, octave chords with brief tremolos that suggested a vibrato, stark single notes, and big flatted chords. The same year, Hines recorded as a soloist. He went into the studio in and recorded his first ten piano solos including versions of "A Monday Date," "Blues in Third", and "57 Varieties”.

On December 28, 1928, Hines's birthday, he began leading his own big band at the Grand Terrace Ballroom, a luxurious Chicago nightspot partly owned by Al Capone. "The Grand Terrace was the Cotton Club of Chicago," Hines said, "and we were a show band as much as a dance band and a jazz band." Hines and his orchestra worked seven days a week, performing three shows a night on weekdays and four shows on Saturdays. A national broadcast popularized the band outside Chicago, and the group spent two to three months of each year touring. The band also became one of the first African-American groups to travel widely in the South during the 1930s.

Hines earned his nickname during this period. After he had given a radio announcer a "fatherly" lecture about his immoderate drinking, the announcer began introducing the pianist as "Father" Hines. The Grand Terrace band recorded frequently, and throughout the 1930s scored a number of hits, including "G.T. Stomp," "Harlem Laments," and "You Can Depend on Me." Hines remained at the Grand Terrace for 11 years and then, believing he was underpaid, left with his band in 1940.

Hines held his band together for the next eight years, and they continued to perform such popular hits as "Jelly Jelly," "Boogie-Woogie on the St. Louis Blues," and "Stormy Monday Blues.". Billy Eckstine became the band's popular singer and in 1943 both Dizzy Gillespie and Charlie Parker were added. In 1946 Hines suffered an injury in an automobile accident that caused him to curtail his touring; by 1948, due to a decline in the popularity of big bands, he broke up the 24-member group. Later in 1948 Hines reverted to sideman status and rejoined his old friend Armstrong. Louis Armstrong's All Stars toured Europe in 1948-49, and attended the 1948 jazz festival at Nice, France. In 1951 Hines left Armstrong to work in a number of smaller settings.

In September of 1955, Hines settled into a regular job at the Hangover Club in San Francisco, one of the last bastions for more traditional forms of jazz. Although he toured annually, traveling to Canada, England, and the European continent, the Hangover Club was his mainstay during the late 1950s and early 1960s. In 1963 Hines opened his own club in Oakland, but the venture was short-lived. In 1964 he abandoned his low profile by playing a successful series of dates at the Little Theatre in New York, and the pianist was once more in great demand. In 1966 Hines joined the State Department's jazz combo and traveled to Russia as a goodwill ambassador. During the 1970s he continued to tour the United States and the world with his quartet, and recorded prolifically during this period, turning out classics like "Tour De Force" and "Quintessential Continued" with natural ease.

Although Hines disliked his nickname, critics have pointed out that it is an appropriate one: he is indeed the father of modern jazz piano. Before him, most jazz pianists were either blues performers, or stride pianists, Hines filled the space between these approaches with an almost hornlike style. Today jazz aficionados accept the piano as a mainstay of jazz, thanks to Hines's seminal work with Armstrong and his work as a soloist in 1928. Unlike some early jazz performers, he continued to embrace new music over his 50-year career, and his personal style continued to grow in complexity. Even at the late stage of his career, Hines constantly took chances and came up with surprising and consistently fresh ideas. Despite heart problems and arthritis, Hines performed until a week before his death in Oakland, California, on April 22, 1983

Aptly referred to as "the first modern jazz pianist," Earl Hines differed from the stride pianists of the 1920s by breaking up the stride rhythms with unusual accents from his left hand. While his right hand often played octaves so as to ring clearly over ensembles, Hines had the trickiest left hand in the business, often suspending time recklessly but without ever losing the beat.

Earl “Fatha” Hines left a discography of well over one hundred albums alone, not counting the early sides, and hundreds of sessions as accompanist and sideman. 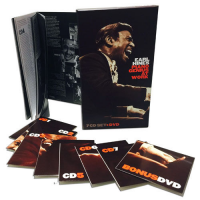 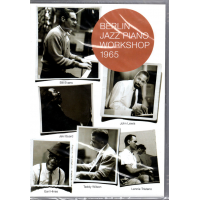 Once Upon A Time

Live at The Party 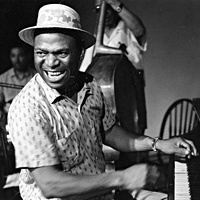 All About Jazz musician pages are maintained by musicians, publicists and trusted members like you. Interested? Tell us why you would like to improve the Earl Hines musician page.