Ragtime music, with its syncopated, polyrhythmic style, was born, in the 1890s in the black saloons and brothels of southern and mid-western cities like Baltimore and St. Louis. It was at the center of American popular music from the end of the nineteenth century until the 1920s. One of the most enduring ragtime pianists was Eubie Blake, who took that music well into the 1980’s.

Eubie Blake was one of the most important figures in early-20th-century African-American music, and one whose longevity made him a storehouse of the history of ragtime and early jazz music and culture.

Born in Baltimore in 1883, Blake began playing piano professionally when he was 16; he wrote his first composition, "Sounds of Africa," (later retitled "Charleston Rag") around the same time. His career did not really take off until he met Noble Sissle in 1915. Together, Blake and Sissle wrote many hits. Blake also collaborated with Andy Razaf (on "Memories of You"), Henry Creamer, and other writers, composing more than 350 songs.

Blake, Sissle, and James Reese Europe began collaborating on the musical ‘Shuffle Along’ in 1916, but were interrupted by World War I and Sissle and Europe's military service overseas. Europe and Sissle returned to the United States in 1919. Europe died shortly after returning from Europe; Blake and Sissle continued working on the musical until its premiere in 1921.

Shuffle Along was the musical sensation of 1921—guaranteeing Blake his place in music history. The musical was significant not only for single-handedly reviving the moribund genre of the black musical, but also for helping launch several young performers and composers on their successful careers. Among these notables were Josephine Baker, Florence Mills, Paul Robeson, and William Grant Still, who was in the pit orchestra. Many songs from Shuffle Along, such as "I'm Just Wild About Harry," "Love Will Find a Way," and "In Honeysuckle Time" became great hits, were recorded dozens of times, and retain their freshness and charm more than 80 years later.

Blake retired in 1946 and was largely forgotten until 1969. That year he recorded a double album for Columbia “The Eighty-Six Years of Eubie Blake,” that amazed listeners who had never heard of him. This led to a revival of his music and commenced a new era of performances and appearances. He was still quite an accomplished ragtime piano player and his skills were evidently in top form.

During the 1970s Blake was awarded honorary degrees from such distinguished institutions as Dartmouth College, Rutgers University, and the New England Conservatory. In 1976 he provided the introduction for Terry Waldo's book, This is Ragtime. In 1981 he received the Presidential Medal of Freedom at a White House ceremony.

Eubie Blake passed away shortly after his 100th birthday, in 1983. 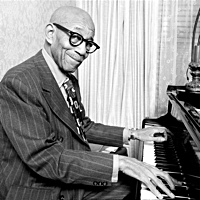 All About Jazz musician pages are maintained by musicians, publicists and trusted members like you. Interested? Tell us why you would like to improve the Eubie Blake musician page.