Scott Joplin personified ragtime; he was its chief champion, the figure most closely associated with its composition. It was Joplin's short, hard-driving melodies- -and the syncopated backbone he furnished them—that helped define the musical parameters of ragtime, a style that gave voice to the African American experience during the late 19th and early 20th centuries.

Sadly, for all his accomplishments in putting a new musical form on the map, Joplin spent his final years madly obsessed with a fruitless crusade to enter, if not conquer, another arena: opera, the staid, classical venue accepted by a white community that had for so long ridiculed ragtime as cheap, vulgar, and facile black music.

Many of the details of Joplin's life, like much of his music, have been lost to history. He was born November 24, 1868, in Texarkana, a small city straddling the border of Texas and Arkansas. Joplin's father, Giles, was a railroad laborer who was born into slavery and obtained his freedom five years before his son's birth. Florence Givens Joplin was a freeborn black woman who worked as a laundress and cared for her children. Like many in the black community, the Joplins saw in music a rewarding tool of expression, and the talented family was sought out to perform at weddings, funerals, and parties.

Scott, whose first foray into the world of scales and half notes came on the guitar, discovered a richer lyrical agent in his neighbor's piano. At first, Giles Joplin was concerned that music would sidetrack his son from a solid, wage-earning trade, but he soon saw the clear inventive genius in Scott, who, by the time he was 11, was playing and improvising with unbelievable smoothness. A local German musician, similarly entranced with Scott Joplin's gift, gave the boy free lessons, teaching him the works of European composers, as well as the nuts and bolts of musical theory and harmony.

In a move not uncommon for young blacks at the time, Joplin left home in his early teens, working as an itinerant pianist at honky-tonks and salons of the Midwest, South, and Southwest. Although some revisionist historians have placed the birth of ragtime at the feet of white composers, such as Irving Berlin, who published "Alexander's Ragtime Band" in 1911, the true origin of the music was to be found in these low rent musical halls. In explaining the black roots of the musical form, Rudi Blesh and Harriet Janis wrote in They All Played Ragtime, "Piano ragtime was developed by the Negro from folk melodies and from the syncopations of the plantation banjos. As it grew, it carried its basic principle of displaced accents played against a regular meter to a very high degree of elaboration." The signature fast and frenetic pace of ragtime reflected the jubilant side of the black experience—compared with the melancholy-heavy blues—and the music became, according to Blesh and Janis, America's "most original artistic creation."

In 1893 Joplin played cornet with a band at the World's Columbian Exposition in Chicago, where musicians from throughout the country displayed for one another the regional variations of ragtime and where Joplin was encouraged by pianist Otis Saunders to write down his original compositions. Joplin left Chicago leading a male vocal octet, the repertoire of which included plantation medleys, popular songs of the day, and his own compositions. Ironically, Joplin questioned the staying power of ragtime, and his first two published pieces, "A Picture of Her Face" and "Please Say You Will," were conventional, sentimental, waltz songs.

After touring, Joplin settled in Sedalia, Missouri, which would later become known as the "Cradle of Classic Ragtime." Joplin attended music classes at the George R. Smith College for Negroes, played with local bands, and taught piano and composition to other ragtime composers, most notably Arthur Marshall and Scott Hayden. This nurturing side would forever buoy Joplin's reputation within the musical community. In several cases, to help the careers of his lesser known contemporaries, Joplin lent his big-money name to their compositions.

In 1899 Joplin issued his first piano rags, "Original Rags" and "Maple Leaf Rag," the latter named for a social club where he often played. A white music publisher, John Stark, had heard Joplin playing the "Maple Leaf" and, though he was concerned that its technical difficulty exceeded even the grasp of its composer, he gave Joplin a $50 advance and a royalty contract that would bring Joplin one cent per copy sold. Such an arrangement was a wild departure from the norm, which netted composers no royalties and advances rarely surpassing $25. According to Peter Gammond in his book Scott Joplin and the Ragtime Era, Joplin said after he had finished this tune, "One day the 'Maple Leaf' will make me King of Ragtime Composers." Although only about 400 copies were sold in the first year, it had sold nearly half a million copies by the end of 1909. With this financial cushion, Joplin was able to stop playing at the clubs and devote all his time to composition and teaching. Joplin's prolific output including; "Peacherine Rag," "A Breeze from Alabama," "Elite Syncopations," and "The Entertainer," made ragtime the premier musical trend of the time, with Joplin the ingenious trendsetter. His compositions—glossed over by some white critics as the so-called "music of brothels"—showcased his keen understanding of inner voices, chromatic harmonies, and the rich interrelationships of melody and rhythm.

Despite his material successes and the regal status bestowed on him by ragtime composers and aficionados, Joplin could not easily brush off the disparaging accent the white world gave the term "rag"; such condescension, according to Joplin, was a transparent means of discrediting the black music as an artless form of folk entertainment. He gave his compositions elegant names, such as "The Chrysanthemum" and "Heliotrope Bouquet," capturing the lyrical mood and seriousness of classical music. To educate the advanced music student about the intricacies of ragtime, Joplin wrote a series of etudes, The School of Ragtime: Six Exercises for Piano, published in 1908, when schools promising the quick learning of the music were popping up across the country.

But Joplin was not satisfied with the composition of unconnected, short pieces, and his wish to explore the cultural context and functions of ragtime—in short, to explain the deeper meaning of ragtime to the white world- -led to his Rag Time Dance. Published in 1902, it was conceived as a sort of ragtime ballet, combining folk dances of the period choreographed by Joplin, and a narrative written by him. Unable to find financial backers, Joplin put up his own money for an ensemble production of the piece. Although The Rag Time Dance proved Joplin's ability to write in extended, musical themes, it did not have the unifying and didactic effects for which he had hoped.

Undeterred and still courting the kind of exposure he believed his music needed, Joplin penned the first ragtime opera, A Guest of Honor. Unfortunately, the opera, which was performed once in a test rehearsal to gauge public sentiment, was never published and was lost. It was apparently Joplin's most inventive musical exercise, but, like The Rag Time Dance, its reception was a major disappointment to him. Blesh and Janis wrote, "The fate of A Guest of Honor is the story of what might have been, for the time was right for syncopated opera. It was certainly time for the romantic-costume idea of light opera as epitomized by the sentimentalities of Victor Herbert to be superseded by something more American, and there is no doubt that America itself was ready for it and that Joplin was the man equipped to write it."

But this would not be the last, nor the most consuming of Joplin's failures. Ever driven to push his own musical limits and to break the shackles in which he believed the white world had bound him, Joplin spent the final years of his life composing and maneuvering to produce a full- fledged opera. Treemonisha is a fable, a folk story about an orphaned girl (the title character), who, by virtue of having an education, is chosen to raise her people above ignorance, superstition, and conjuration to enlightenment. In Treemonisha, Joplin found a forum for the exploration of history and politics, a piece that would never allow the seriousness of his music and of his intellect to be questioned. With words, choreography, and music by Joplin, Treemonisha was not a ragtime opera, but instead a complex work borrowing the phraseology and themes of some of the popular music of the day: Gilbert and Sullivan's sentimental show music, spirituals, plantation songs, brass band marches, and barber shop harmonies. Schafer and Riedel wrote that Treemonisha was Joplin's "greatest accomplishment as a composer," and that it, having been composed two decades before George Gershwin's Porgy and Bess, served as "the first demonstrably great American opera, for it speaks a genuine American musical idiom within the conventional forms of Western opera."

The world at that time, however, was not ready for Joplin's operatic alchemy, in some respects because Joplin's name, so closely associated with ragtime, had begun to fade from the popular mind as ragtime became absorbed by the derivative white tunes of Tin Pan Alley. There was a performance of Treemonisha in 1915, but without scenery, orchestra, costumes, or lighting, the piece that had been at the center of his musical and intellectual life for more than five years came across as thin and unconvincing. Some writers have suggested that when Joplin died in 1917, he did so brokenhearted, shattered that his entry into the most socially redeeming class of music—opera—had been a bust.

Though Joplin died well after he had reached the heights of his popularity; his contributions to music, particularly in the popularization of an originally black musical form, have never been in question. The mesmerizing interplay of rhythm and melody influenced European composers Claude Debussy and Antonin Dvorak, and ragtime enjoyed a brief revival in the 1970s, when the film The Sting, starring Paul Newman and Robert Redford and featuring Joplin's song "The Entertainer," reintroduced music lovers to Joplin's playful brilliance.

"The genius of Joplin was twofold," attested Blesh and Janis, "the tyrannical creative urge and the vision. With the first alone, even had he been, perhaps, the greatest of all the ragtime players, his most perfectly constructed pieces, unscored, would today be one with all the others, lost with a lost time. But his vision was the sculptor's, molding transitory vision into stone's indestructibility. He was at once the one who makes and the one who saves. Through the labor of this one 'homeless itinerant' the vast outcry of a whole dark generation can go on sounding as long as any music will sound."

Jazz this week: Kneebody, a tribute to Scott Joplin, "Sculptures in...

When Scott Met Irving ... or Didn't

Jazz at the Bistro, Scott Joplin House Named in Article on "Nine Great... 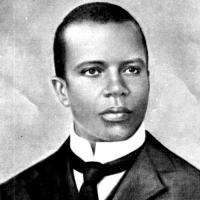 All About Jazz musician pages are maintained by musicians, publicists and trusted members like you. Interested? Tell us why you would like to improve the Scott Joplin musician page.