New Orleans music ushered in the 20th century with the wail of a joyful noise: collective improvisation, syncopated rhythms, eclectic stylings, and an infectious joie de vivre that was exhilarating. Indeed, thanks to New Orleans musicians such as King Oliver, Jellyroll Morton, and above all, Louis Armstrong, the 1920s became known as the "jazz age."

Just like early jazz was an amalgamation of the music of its era, The Dirty Dozen Brass Band's musical revolution was actually a reintroduction of the basic eclecticism that made jazz the most dynamic music of the 20th century.

Founded in April of 1977, the formation of the Dirty Dozen created a musical revolution in New Orleans. For over seventy-five years, the brass band tradition existed largely unchanged until this forward looking, bebop influenced ensemble completely changed both the style and the repertoire of brass band music.

As trumpeter and bandleader Gregory Davis points out, "The concept of the Dirty Dozen is to play and experiment with all types of music. We will take a song - and not worry about if it is a jazz song or any particular type of song - we'll just take a song and see what we can do with it as The Dirty Dozen."

For over three decades the Dirty Dozen has been touring the world. They've played all the major festivals - Newport, New York, New Orleans Jazzfest, Playboy, Montreaux - and they have played one-nighters in no name venues in small towns you need a local map to find. If they didn't love the music, they couldn't keep up the pace, but, as their signature song exclaims, they roll on.

Davis believes, "being a New Orleans band has marquee value. The other side of that coin is that people expect you to do a good job. The audience expects something special. So our challenge is, every night, to make sure that you are not only playing some good music, you have to also put on a good show."

In a world of war, poverty, ecological disasters, dissent and conflict in the social fabric of society, Marvin Gaye found himself looking to the heavens in 1971 and asking the heartfelt question “What’s Going On?” And with that Gaye created the unqualified masterpiece of his astounding career, an album addressing these questions of an uncertain world.

In 2006, with the same questions looming even larger, the Dirty Dozen Brass Band borrowed on Gaye’s inspiration to create a crowning achievement in their own career, which spans more than three decades of innovation and leadership in New Orleans music and beyond.

Mixing vibrant instrumental pieces with simmering, scorching vocal numbers the Dirty Dozen has translated the songs from “What’s Going On,” into its own music language. The new recordings are infused with the powerful feelings resulting from the band’s own experiences with Hurricane Katrina, the subsequent massive flooding and the devastation of their homes and communities.

The August 29, 2006 release of “What’s Going On” marked the one-year anniversary of Katrina’s devastation of New Orleans. “Katrina exposed a lot of issues and social irregularities that shouldn’t be tolerated in the society we live in, but appear in our own backyards,” says Towns. “New Orleans will prevail, but as far as the social stuff, it’s what’s been going on. Gee, it takes a catastrophe like Katrina to expose the whole thing.”

Funeral for a Friend 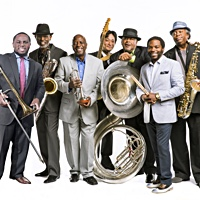 All About Jazz musician pages are maintained by musicians, publicists and trusted members like you. Interested? Tell us why you would like to improve the Dirty Dozen Brass Band musician page.