The Meters created a unique sound that lasted through the sixties and seventies and was reborn in the late eighties. Their trademark sound blends funk, blues, and dance grooves with a New Orleans vibe, where they have become an institution.

The history of this native New Orleans band dates back to 1967, when keyboardist Art Neville recruited George Porter Jr., Joseph (Zigaboo) Modeliste and Leo Nocentelli to form The Meters. When Neville formed the band, he had already been a prominent member of the New Orleans music community for 15 years. He was still in high school when, leading The Hawkettes, he cut the 1954 hit single “Mardi Gras Mambo”, which is still pressed every year at Carnival time.

After working with Allen Toussaint on some Lee Dorsey tracks, The Meters were told to lay down some tracks of their own. Between 1967 and 1969, they recorded four consecutive hit singles: “Sophisticated Cissy,” “Cissy Strut,” “Ease Back,” and “Look a Py Py,” which all reached the Top 10 on the R&B charts. Neville created a band that would rule the New Orleans music community for decades to come.

From 1971 to 1978 The Meters recorded five albums on the Warner/Reprise label. Cyril Neville, Art Neville's brother, joined the band in 1975 as a percussionist and vocalist for three of those albums, also recording the critically acclaimed “The Wild Tchoupitoulas,” which was recorded with Neville's uncle, Big Chief Jolly, the most celebrated member of the Mardi Gras Indians. Simultaneously, the band was widely heard playing on albums by Dr. John, Robert Palmer, King Biscuit Boy,Lee Dorsey ,Allen Toussaint and a Mardi Gras single released by Paul McCartney and Wings.

In 1975, the Meters performed at a party for Paul and Linda McCartney aboard the Queen Mary in California. Shortly thereafter, The Rolling Stones requested that The Meters join them as an opening act on their (1975) American Tour and (1976) European tours-over 75 dates were played between both tours.

After twelve years and ten studio albums, The Meters disbanded in 1979 due to business problems. The Meters have maintained an avid following of fans and other artists, and their music has been sampled by musicians around the world, including rap artists Heavy D, LL Cool J and Queen Latifah. The Red Hot Chili Peppers pay homage to them in one of their hit songs, and bands such as the Grateful Dead, KVHW, Steve Kimock Band, Widespread Panic, Rebirth Brass Band, Galactic and String Cheese Incident often played their music.

Musically, the next decade took the band members in different directions. Art Neville and Cyril Neville pioneered the internationally successful Neville Brothers, while Zigaboo Modeliste drummed for Keith Richards and Ron Wood on the New Barbarians Tour. George Porter Jr. founded his first band, Joy Ride and in 1990 recorded his first solo CD, Runnin' Pardners, for Rounder Records. George worked in the studio and toured with David Byrne, recorded with Robbie Robertson, and played on Harry Connick Jr.'s first funk/soul CD “She.” In addition, George performed on three back-to-back Platinum records with Tori Amos. He has also released four CD's with his own with Runnin' Pardners.

Now, after more that 25 years of separation, Art Neville, Zigaboo Modeliste, George Porter Jr., and Leo Nocentelli are returning to festival, concert and club stages as the supergroup that put New Orleans funk on the map and that continues to exert an unparalleled influence on American roots and popular music. The Meters' unique place as a touchstone for countless jam bands and as one of the most sampled groups in all of hip hop and pop music has kept it relevant to contemporary audiences in a way that few, if any other 70's groups can claim.

Something Else! Interview: Zigaboo Modeliste, Co-Founder of the Meters 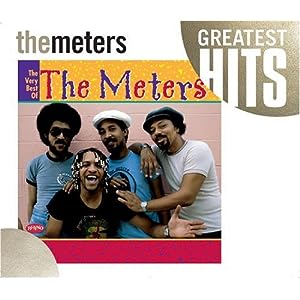 Help improve the The Meters page

All About Jazz musician pages are maintained by musicians, publicists and trusted members like you. Interested? Tell us why you would like to improve the The Meters musician page.