Nashville born, Pittsburgh raised Anton DeFade has established himself as one of the most in demand bassists in the Pittsburgh area and beyond. He is a full time member of the soul/rock band, The Commonheart, and when he's not touring the country with them he splits his time writing, arranging, and freelancing in his hometown of Pittsburgh.

As a child, Anton was introduced to many different styles of music by following his dad, Ray DeFade Jr., around to his gigs from loud rock concerts to intimate jazz performances. A decade later at the age of 14, he began working as a professional musician performing in various rock groups, jazz gigs, and local productions of musicals.

Upon graduating high school, Anton performed with the Center of Life (COL) jazz band in addition to teaching at the program. Center of Life is a community organization that uses music, arts, and education to empower families within the community of Hazelwood and help revitalize the community. In 2011, the Center of Life Jazz Band took 2nd place in the Monterey Next Generation Festival and went on to take 1st place the following year. After this victory, Anton formed the band Elevations alongside fellow COL members George Heid III, Brett Williams, Benny Benack III, and Michael Stephenson. Elevations recorded two studio albums and featured musicians such as Sean Jones, Warren Wolf, and Carolyn Perteete.

In December 2016, Anton produced the collaboration recording "That Spirit Of Christmas" featuring Clinton Clegg and members of The Commonheart, Buffalo Rose, and Steeltown Horns. An original arrangement of the classic Ray Charles Christmas song, all of the proceeds from the recording went to the Light Of Life organization which helps the homeless population of Pittsburgh.

Currently, Anton is focusing more attention on his newest project Series of Three. The project will feature different musicians, genres, original music, cover music, different arrangements of songs, and more. Each release will consist of three songs and an accompanying podcast episode. Series of Three: Vol. 1 is set to be released in mid-June 2019 and features guitarist John Shannon, drummer James Johnson III, and pianist Antonio Croes.

The first episode of the podcast is an interview with guitarist John Shannon and the two discuss coming up as musicians in Pittsburgh, deep listening, and Pittsburgh's newest jazz club Con Alma (which is being run by John). Show less 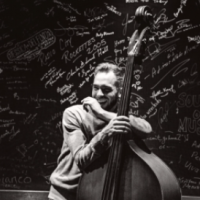 All About Jazz musician pages are maintained by musicians, publicists and trusted members like you. Interested? Tell us why you would like to improve the Anton DeFade musician page.