One of the principal pioneers of New Orleans rhythm & blues, his influence can be heard in Fats Domino, Allen Toussaint, James Booker and Dr. John, among many others. Known for his unique mix of blues, jazz, calypso, ragtime, and zydeco, "Fess" (as he was known) defined and captured the essence of New Orleans in his music.

Born Henry Roeland Byrd in Bogalusa, Louisiana 1918, and raised in New Orleans, Fess started performing at an early age, often dancing down Bourbon Street for tips. In addition to piano, he learned to play guitar and drums in the early 1930s and was in and out of numerous bands. He soon found there were better ways to make money than music. He worked as a cook, then as a boxer, and eventually became a professional card player. It wasn't until the late 1940s that he returned to music.

He went into the army during World War II, and was discharged in 1943. At that point he led a variety of groups, including the Mid Drifs, Professor Longhair and the Four Hairs, and Professor Longhair and His Shuffling Hungarians. Debuting on Star Talent records in 1949, Fess laid down the first version of his signature "Mardi Gras in New Orleans," featuring the unmistakable whistled intro and backing band the Shuffling Hungarians. Longhair's next date was for Mercury producing his first and only national R&B hit in 1950, "Bald Head," under the name Roy Byrd & His Blues Jumpers. Longhair made other great recordings for various labels early in his career most notably for Atlantic Records in 1953 producing the immortal "Tipitina," a romping "In the Night," and the boogie "Ball the Wall". Longhair came back on Ebb records in 1957 with the wailing "No Buts - No Maybes." He re-recorded the seminal local anthem "Go to the Mardi Gras" for Ron records in 1959. This is the version played every year during Carnival in New Orleans, and is still one of the most beloved songs in the New Orleans music songbook.

Despite recording such classics as “Tipitina,” “Big Chief,” and “Going to the Mardi Gras,” he never received much exposure outside of Louisiana, although his reputation in New Orleans was substantial. Even though a local legend, Fess was forced to support himself by returning to cards and working as a janitor in the mid- 1960s.

Fess' career was resurrected in the early 70s with the help of his then manager Allison Miner and New Orleans Jazz & Heritage Festival founder, Quint Davis. His performance at the 1971 Jazz Festival put him on the comeback trail. Atlantic recorded him in 1971-72 in what would be known as “House Party New Orleans Style: The Lost Sessions.” There was also some other dates for Rhino released as “Mardi Gras in Baton Rouge,” these were also done in 1971-72. He toured Europe, headlining the 1973 Montreux Jazz Festival. He made a few albums in the last decade of his life, including “Rock 'n Roll Gumbo,"(1977) and “Live on the Queen Mary.”(1978)

At the age of 62, his album, “Crawfish Fiesta,” for Alligator, was completed and shipped to stores for release on January 31st 1980. On January 30th, the eve of the record's release, Professor Longhair died peacefully in his sleep.

His unique style fused diverse elements including blues, barrelhouse boogie-woogie, rock, and gospel, which he combined with calypso, rhumba, and second-line street parade rhythms. His hybrid "rhumba-boogie" piano style, with a heavy, percussive left hand, forever changed the sound of rhythm and blues piano. Fess had a charismatic presence and unflinching soulful quality which pervades his recordings and performances. Few artists embodied his singular quality or have equaled the span of his influence on modern music. 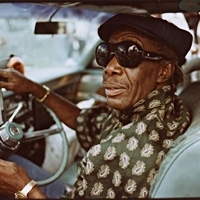 All About Jazz musician pages are maintained by musicians, publicists and trusted members like you. Interested? Tell us why you would like to improve the Professor Longhair musician page.