Roosevelt Sykes was one of the greatest blues pianists of all time. In a recording career that extended over five decades, Sykes displays a mastery of performing styles from barrelhouse to stride piano, from St. Louis boogie woogie to New Orleans blues.

Considered by musicians and music historians as the father of the modern blues piano style, Roosevelt Sykes possessed a beautiful voice and a unique keyboard style that was often imitated by other blues pianists, and he was the mentor for Memphis Slim. During the 1930s, he performed with sidemen ranging from jazz drummer "Big" Sid Catlett to slide guitarist James "Kokmo" Arnold. He also performed solo piano pieces. A genial man with a vibrant personality, Sykes was the consummate entertainer. He delighted audiences both in Europe and the United States with blues and ragtime-influenced songs filled with risque humor.

Roosevelt Sykes was born on January 31, 1906, in Elmar, Arkansas, a community he later described as “just a little sawmill town." In 1909, Sykes moved with his family to St. Louis, Missouri. He often returned to his grandfather's farm near West Helena and played the organ in a local church. By 1918 he had taught himself the art of blues piano and, three years later, left home to work as an itinerant pianist in gambling establishments and barrelhouses throughout Louisiana and Mississippi. He led the life of a rambler, playing music in order to survive.

While in St. Louis, Sykes performed as a soloist and occasionally played with other musicians like guitarist Big Joe Williams. He later attributed his early piano influences to local St. Louis musicians such as "Red Eye" Jesse Bell, Joe Crump, and Baby Sneed. However, his most important mentor was "Pork Chop" Lee Green, who taught Sykes a rendition of the "Forty-Four Blues" piano style. "The Forty- Four Blues” was a popular theme in the South and many pianists attempted to master its intricate separated rhythms in the bass and treble."

In 1929 Sykes met Jesse Johnson, the owner of the Deluxe Record Shop in St. Louis. Sykes, who at the time performed at an East St. Louis club for one dollar a night, quickly accepted Johnson's invitation to a recording session in New York. Accompanied by Johnson, Sykes arrived at the Okeh Studios in New York in June of 1929. He recorded several numbers, including a version of "Forty- Four Blues" which featured vocals based on the theme of a .44 pistol. During the same year, while attending a recording session for Paramount, Sykes received the nickname "The Honey Dripper" from a song written by singer Edith Johnson. Although some people speculated that this nickname was a reference to Sykes's sexual prowess, Johnson contended that she gave him the nickname in reference to his kind disposition and outgoing personality.

In the early 1930s, Sykes moved to Chicago. During the Depression years, he recorded for several labels under various pseudonyms. For the Victor label, he recorded as Willie Kelly on the classic 1930 side "32-20 Blues." Two years later, he cut his popular number "Highway 61 Blues" for Champion, the subsidiary label of Gennett Records. During the 1930s, Sykes served as a back-up pianist for more than thirty singers including Mary Johnson and James "St. Louis Jimmy" Oden.

Through the recruiting efforts of Mayo "Ink" Williams, Sykes signed with Decca Records in 1934. His 1936 Decca side "Driving Wheel Blues" emerged as a blues classic. Sykes settled in Chicago in 1941 and, within a short time, became a house musician for the Victor/Bluebird label. Although the label marketed him as the successor to Fats Waller, who recorded on the same label and died in 1943, Sykes found success as the creator of his own style and remained active as a session man, recording with such musicians as Robert Brown (Washboard Sam). While in Chicago, Sykes formed his own group, The Honeydrippers, in 1943. The Honeydrippers consisted of twelve musicians, including many of Chicago's finest horn players. Traveling with his group, Sykes played venues like the Palace Theater in Memphis. While performing with The Honeydrippers, Sykes adapted his loose, solo-oriented piano style to formal chord sequences.

Following the end of World War II in 1945, Sykes continued to perform and recorded with several labels. Sykes moved to New Orleans in 1954 and, despite the decreasing popularity of the blues during the mid-1950s, continued to play in small clubs around the Crescent City. He returned briefly to St. Louis in 1958 and then moved to Chicago in 1960, where he was "rediscovered" by enthusiasts of the folk music revival.

The folk and blues revivals of the 1960s marked the resurgence of Sykes's career. By the early 1960s, he recorded for Bob Koester's Delmark label, cutting the album “Mistake in Life.” In 1961, Sykes toured Europe and appeared in the Belgian film Roosevelt Sykes: the Honeydripper. In 1965 and 1966, he toured with the American Folk Blues Festival, while in Europe in 1966, Sykes cut the album “Roosevelt Sykes, Gold Mine,” for Delmark. He also recorded for specialty labels such as Bluesville, Storyville, and Folkways.

Sykes moved to New Orleans in the late 1960s and often played at the Court of the Two Sisters. He appeared as the opening act for the first annual Ann Arbor Blues Festival in 1969, playing before an audience of young admirers. Sykes appeared in the French film Blues Under the Skin in 1972.

In September 1973, he made a triumphant return to the Ann Arbor Blues & Jazz Festival and his set was recorded on the album “Ann Arbor Blues & Jazz Festival, Volume 3.” That same year, Delmark released Sykes's album “Feel Like Blowing My Horn,” featuring such Chicago- based bluesmen as guitarist Robert Lockwood, Jr. and drummer Fred Below, this recording was very well received and is still in popular reissue. In 1976, he took part in the BBC television series The Devil's Music-A History of the Blues. He also appeared on John Hammond Jr.'s 1978 Vanguard album “Footwork,” as a guest performer.

Sykes continued to perform at festivals and in concert until his death from a heart attack in 1983, in New Orleans.

Nasty But It's Clean 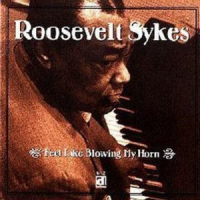 All About Jazz musician pages are maintained by musicians, publicists and trusted members like you. Interested? Tell us why you would like to improve the Roosevelt Sykes musician page.